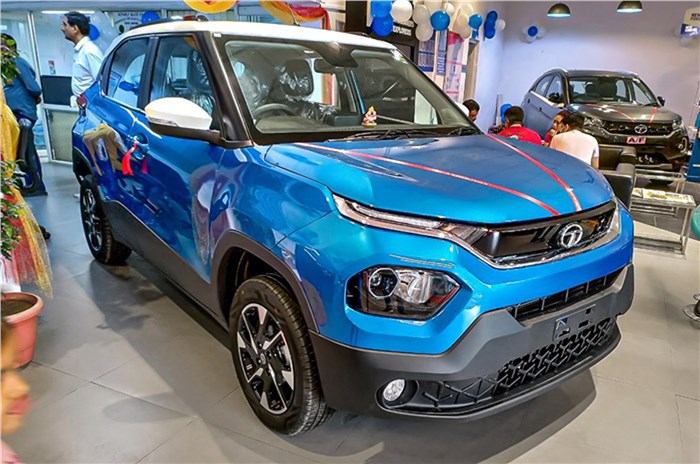 
The shortage of semiconductors, the Russia-Ukraine war, vehicle price hike, fuel price increase and other supply chain issues continue to weigh down on buyer sentiment across the passenger vehicle market in India. In terms of pure numbers, the low base effect has kicked in and most OEMs are in the green compared to the marginal sales seen last April as the country tackled the scourge of COVID-19.

India’s leading car manufacturer Maruti Suzuki India's domestic sales fell to 1,21,995 units as against 1,35,879 units in April 2021, a fall of 10 percent. The company sold a total of 1,50,661 units in April 2022, including Light Commercial Vehicles and exports. April sales also slipped nine percent from 1,33,861 units sold in March 2022.
On the exports front, the numbers for April were 18,413 units as against 17,237 units in April 2021. The company has been focussing on exports in a major way as the chips required for these models are more easily available.
In a statement, the company said the shortage of electronic components had a minor impact on the production of vehicles, mainly domestic models. Maruti Suzuki said it has taken all possible measures to minimise the impact.
Maruti Suzuki recently launched the updated XL6, while the other products planned in the near future include an updated Brezza, followed by the five-door off-roader Jimny. Also in the works is a midsize SUV to rival the Kia Seltos and Hyundai Creta, which will be sold by both Toyota and Maruti Suzuki.

Hyundai Motor India clocked 44,001 units in domestic sales in April 2022, registering a 10.2 percent year-on-year decline compared to 49,002 units sold in April 2021. In March 2022, Hyundai sold 44,600 units which is a mere 1 percent drop. The decline can be attributed to the global supply chain woes.
The Korean carmaker’s FY22 (April 2021-March 2022) performance is marginally better over FY21 (April 2020-March 2021), registering a 2 percent growth over 4,81,500 units (FY21: 4,71,535). Hyundai has been seeing strong demand for some of its popular models like the Creta – which continues to have a waiting period of eight to 12 months, depending upon the variant and city. Other models like the Hyundai i20 premium hatchback, Venue compact SUV as well as the Aura compact sedan, particularly in its CNG trim, are witnessing strong demand.

Tata Motors sold 41,587 units in April 2022, registering a significant 66 percent year-on-year growth compared to 25,095 units sold in the same month last year. In March 2022, the company had sold 42,295 units, maintaining a flat trajectory on a month-on-month basis.
Out of the total volumes, Tata’s internal combustion models sold 39,265 units – a 60 percent increase over last year's figures (April 2021: 24,514) – while its electric drivetrain models, including the Nexon EV, Tigor EV and Xpres-T, witnessed a four-fold growth with 2,332 buyers.
Despite global supply chain constraints, Tata Motors has been agile in its planning and management of the crisis over the last one year, making it post a noteworthy performance in FY22. The company recently unveiled two brand-new concepts – Tata Curvv and Avinya. The former will spawn a future electric and ICE SUV, while the Avinya will give birth to midsize SUVs in pure-EV architecture with an aim to offer a driving range of over 500km. The first SUV based on the Avinya will arrive in the market by 2025.

Mahindra & Mahindra sold 22,526 vehicles in the passenger vehicle segment in April 2022. This is a 23 percent year on year growth with the company selling 18,285 units in the same period last year. However, it is also an 18 percent decline over March 2022, where Mahindra sold 27,386 vehicles. Exports for April were at 2,703 vehicles.
M&M Automotive Division president Veejay Nakra said, “We continued our growth trajectory in the SUV segment with sales of 22,168 vehicles registering a growth of 22 percent.”

Kia clocked sales of 19,019 units in April 2022, allowing it to register a year on year growth of 18 percent. With this, Kia continues to retain its position among the the top five car manufacturers in the country. The Seltos continues to be the highest contributor to the overall sales with 7,506 units, followed by the newly launched Carens with 5,754 units, Sonet with 5,404 units and Carnival with 355 units sold.
On a monthly basis, however, Kia's sales have declined by 16 percent as the company sold 22,622 cars in March 2022, when Kia recorded its highest-ever monthly sales in India. In other news, Kia recently updated the Seltos and Sonet with more safety features, and is soon going to bring the much-awaited all-electric EV6 to India. Bookings for the EV6 will commence later this month, followed by its price announcement and launch in August.

Toyota Kirloskar Motor (TKM) sold 15,085 units in April, posting a significant 57 percent year-on-year growth compared to 9,600 units sold in April 2021. The company, however, posted a 12 percent drop in month on month sales where they sold 17,130 units in March 2022. The rise in numbers comes on the back of a low year-ago base when the second wave of COVID-19 in India had resulted in a slowdown in demand for cars.
TKM, which continues to witness strong demand for its Fortuner SUV and Innova Crysta MPV, had also introduced two price hikes of up to Rs 2,50,000 on the Fortuner between January and April 2022. Starting May 1, it has also hiked prices of the Glanza and Urban Cruiser, citing rising input costs, but said in a statement that the overall impact has tapered down to minimise impact on consumers. The company is jointly developing a brand new midsize SUV with Maruti Suzuki India and is likely to showcase the new product later this year.

MG Motor India reported sales of 2,008 units in April 2022 as production was impacted by the global supply chain constraints. The company had clocked sales of 2,565 units last April which was also impacted by COVID-19. The company said that it expects the situation to improve gradually in six to eight weeks. MG Motor also witnessed a 57 percent decline in its monthly sales. (March 2022: 4,721 units).
The all-new ZS EV continues to garner a strong customer response with over 1,000 bookings each month. To further strengthen the EV ecosystem, MG Motor recently partnered with Bharat Petroleum for setting up EV charging infrastructure across the country.

Skoda Auto (India) reported sales of 5,152 units in April 2022, an increase of 436 percent, as against 961 units registered last April. The past month’s sales performance is the second highest number of units sold in a month ever, after March 2022, when the company recorded 5,608 units. The company attributed the consistent sales numbers to its increasing network expansion and customer touchpoints.
Skoda Auto India brand director Zac Hollis said, “The Slavia is a resounding success while the Kushaq SUV continues finding newer homes. We have already crossed 190 touch points so far and will only expand further. This ‘Beyond the Product’ approach is seeing us record consistent sales month on month.

Though there are some green shoots of revival, it will be wrong to conclude that the industry is completely out of the woods. Supply issues relating to raw material shortage and high commodity prices continue to be a point of concern. Most OEMs are betting on offering several variants to drive sales.