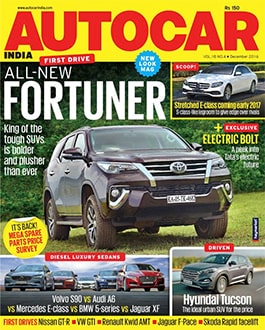 Autocar India is a licensed publication of 'Autocar', a British automobile publication by Haymarket Motoring Publications Ltd. It is part of Haymarket SAC Publishing (India) Pvt. Ltd., a joint venture between Haymarket and Sorabjee Automotive Communications.

Led by Hormazd Sorabjee, India's leading automobile journalist, the first Autocar India issue came out in September 1999. Over the years, the brand has earned an enviable reputation for high level of editorial content, production standards and meticulous testing. The parent brand, 'Autocar', was first published in 1895 and is referred to as the world's oldest car magazine. Autocar also lays claim to inventing the road test in 1928.