Facelifted EV to be retailed under a new Xpres brand targeted at fleet operators; standard range version now gets a claimed range of 165km 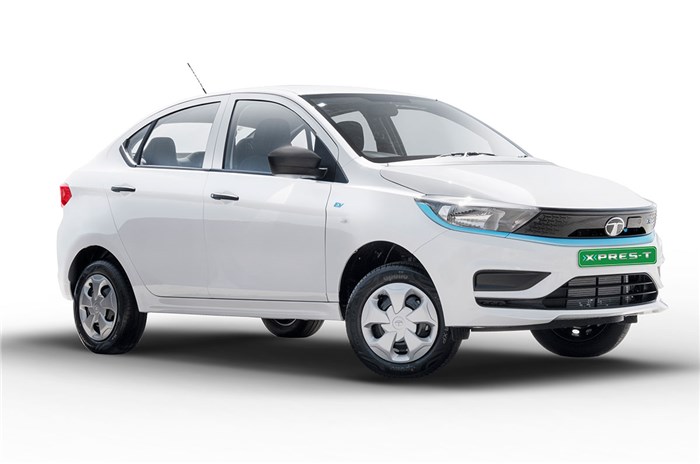 The Tata Tigor EV has received a facelift, along with a new name for fleet buyers. The updated electric sedan is now being retailed under a new Xpres brand aimed specifically at fleet operators, which will see more future models under its portfolio. The Tigor EV is now called Xpres-T EV, and it will be open for bookings soon. The facelifted electric sedan receives styling changes in line with the facelifted Tigor launched last year. It continues to be offered in normal and extended range spec – the latter with a bigger battery.

As mentioned above, the Xpres-T EV gets the same cosmetic changes as the facelifted Tigor compact sedan. The EV, though, will get unique touches such as the blue highlights and an enclosed grille with the tri-arrow pattern. Additionally, there’s now a charging socket located in the grille as on some other EVs on sale in the country.

The Xpres-T EV’s cabin too is in line with the standard Tigor, with notable differences being the blue highlights and the ‘state of charge’ meter in place of the traditional RPM gauge.

The Xpres-T EV will be available with two battery pack options – a 16.5kWh pack in the standard and 21.5kWh in the extended range model. The batteries power a 70V three-phase induction motor putting out 30kW (41hp) and 105Nm of torque – identical to the pre-facelifted Tigor EV. Tata claims an identical 213km range (ARAI) for the refreshed extended range model. Interestingly, the standard EV now offers a claimed 165km range – up from 143km on the outgoing Tigor EV.

As for charging, Tata claims a 0-80 percent charge time of 90min and 110min for the standard and extended range battery packs with a fast charger.

The previously available entry-level XE trim has been dropped from the line-up. The facelifted Tigor EV will have no direct competition in the market.