With the advantage of connected car tech and a new turbo-petrol engine, the Hyundai Venue has plenty going for it. Is it significantly more fuel-efficient and affordable than its bigger sibling, the Creta? Let’s find out. 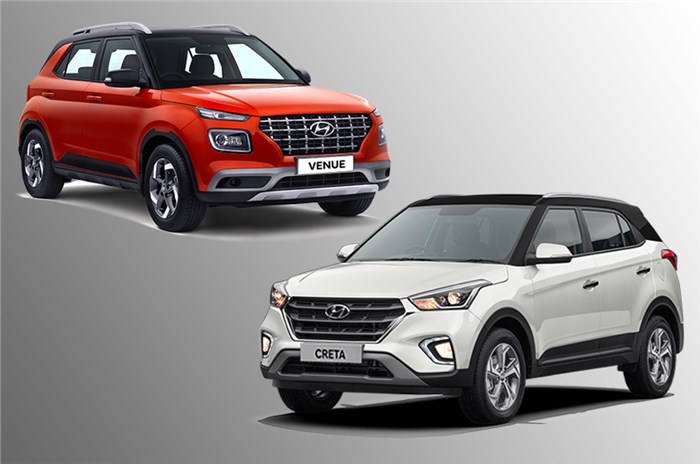 Easily one of the most highly anticipated launches of 2019, the Hyundai Venue has finally launched in India at an eye-catching (and introductory) starting price of Rs 6.50 lakh (ex-showroom, pan-India). With such aggressive pricing, it’s only natural that Hyundai is likely to lure potential buyers away from a number of cars, and it isn’t surprising to see some of those who were earlier considering buying a Hyundai Creta growing a bit curious about this new five-seat SUV. We had previously brought you the differences between the two in terms of dimensions, their engine options and features. Now, it’s time to see how the Hyundai Venue compares to its elder sibling on fuel efficiency and price fronts.

How do the Hyundai Venue’s fuel efficiency figures match up with the Creta’s?

Starting things off is the Hyundai Venue with the new, 1.0-litre turbo-petrol engine mated to a 6-speed manual gearbox, which has an economy of 18.27kpl. Next up is the 1.0 turbo-petrol with the 7-speed dual-clutch automatic that has an ARAI-tested mileage figure of 18.15kpl. The Venue 1.2 petrol (available only with a 5-speed manual gearbox) delivers a notably lower 17.52kpl.

The turbo-petrol’s fuel efficiency figures are not only the best-in-class, but also much higher than that of the Hyundai Creta. The Creta’s 1.6-litre petrol engine – paired with a 6-speed manual gearbox – has an official economy figure of 15.29kpl, which is 2.2kpl lower than the Venue 1.2 petrol. The official fuel efficiency figure for the Venue 1.0 GDI (MT and DCT) is nearly 3kpl higher, an advantage the Venue enjoys thanks to its smaller size and relatively lower kerb weight. What makes the Venue stand out is the fact that its three-cylinder turbo-petrol engine nearly matches the Creta’s 1.6-litre unit on power, and at 172Nm, has a good deal more torque, which should make it a sprightly drive.

While the Hyundai Venue 1.4 diesel’s official fuel efficiency figure of 23.7kpl may not be the highest in the compact SUV segment, it is nearly 2.5kpl higher than the Creta 1.4 diesel, which has an economy of 21.38kpl. With both SUVs sharing the same 1.4-litre engine, it is once again the Venue’s smaller size and lower kerb weight that helps it eke out a major advantage on the fuel efficiency front.

Does the Hyundai Venue’s price overlap with the Creta’s?

With the Venue, Hyundai truly saved the best for last. The aggressive pricing (albeit introductory) caught many by surprise, and it is when you place the Venue’s price sheet next to the Creta’s that you realise how cleverly Hyundai has positioned its first-ever sub-4-metre SUV. Not only does it sit bang in the middle of the crowded compact SUV segment, but also manages to steer largely clear of stepping on the toes of its bigger sibling. Yes, the Venue’s sparsely-equipped 1.2-litre petrol variants are present majorly to make for an attractive starting price, but even so, the higher variants of the Venue aren’t priced close to those of the Creta. The Creta range starts at Rs 10 lakh, and the only Hyundai Venue variants that are priced above Rs 10 lakh are the 1.0 GDI DCT SX+, and the fully-loaded top-spec SX (O) trims. And yes, while the SX (O) variants are more expensive than the Creta’s entry-level E+ variants, they still undercut the next Creta variant – the EX – by a bit, and offer way more in terms of features, including the 8.0-inch touchscreen infotainment system with BlueLink connected car tech, six airbags, a sunroof, Arkamys sound system, wireless smartphone charging and more. Despite the SX+ DCT being the most expensive Venue you can buy at Rs 11.11 lakh, it is still a massive Rs 2.6 lakh cheaper than the Creta 1.6 petrol-automatic.

What advantages does the Creta have over the Hyundai Venue?

All said and done, the Hyundai Creta belongs to a different segment. It is a proper midsize SUV, is a full 275mm longer and 75mm taller than the Venue, and also has a wheelbase that’s longer by 90mm. Not only does it make a difference on the outside, but also in terms of interior space. The Venue’s rear seat is significantly down on space to the Creta’s, which has a good amount of room. And while the Hyundai Venue’s 350-litre boot is spacious and well-shaped for a compact SUV, it falls short of matching the Creta’s 405-litre boot. Ultimately, for someone who needs the extra space, the Creta remains the SUV to pick. Additionally, the Creta also gets the option of a bigger, more powerful 1.6-litre diesel engine, and a diesel-automatic version, which the Hyundai Venue range currently lacks. By default, then, the Creta will be the pick of the two for those looking for the convenience of a diesel-automatic.

Think the Hyundai Venue looks like a better deal than the Creta on paper? Let us know in the comments.