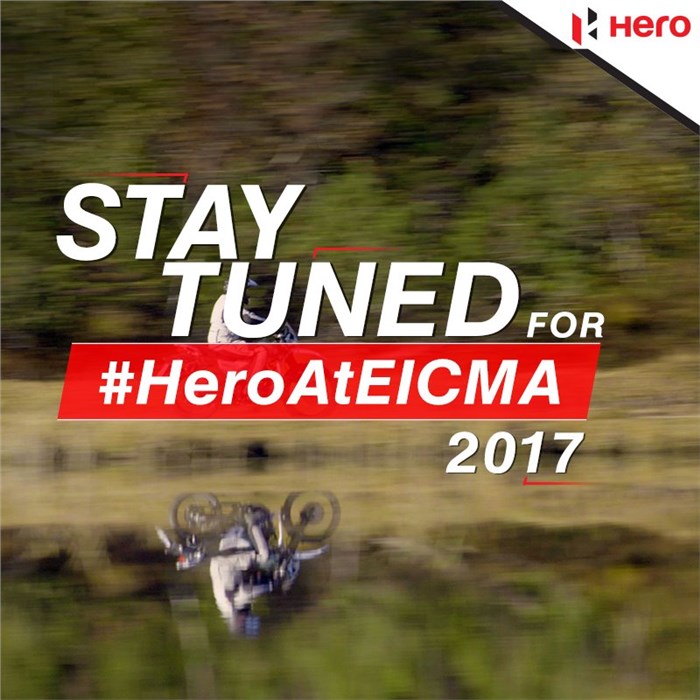 Impulse successor to be revealed at EICMA 2017 with a larger motor and more features.

Hero MotoCorp has released yet another teaser of its upcoming adventure motorcycle, scheduled to be showcased at the EICMA 2017 show in Milan, Italy. A close look at the teaser image reveals a minimalist on/off-road motorcycle along the lines of the now-defunct Impulse, with a few mechanical details emerging this time around.

To start from the front, it clearly sports a larger front wheel as compared to the rear (mostly a 19/17-inch setup – typical, as was the case with the Impulse) and will run enduro-pattern tube tyres. While it will sport a conventional telescopic fork, expect to see some dirt bike-style rubber fork gaiters and also, more importantly, a fork brace – something that the Impulse sorely missed. From the teaser, a moderately sized single brake disc (up front) is evident although Hero will do well to equip it with ABS (with a disengage option to suit dirt riders).

The rider’s generous proportions in the teaser image help camouflage the new motorcycle’s dimensions, although the fairly upright ergonomics are clearly visible, with a raised handlebar and barely-rear set footpegs completing its commanding yet friendly riding geometry – just what you need from an entry-level off-road-capable motorcycle. The image also shows a mildly elevated pillion seat, an elaborate grab rail and a luggage rack extension, all of which the Impulse was already equipped with. The new ‘Impulse’ (though it won’t be called that) will offer at least 220mm of ground clearance (bringing it level with the Royal Enfield Himalayan), which is ample for most off-road conditions. Hero will also consider giving it a seat height lower than 800mm to lure a wider demographic of riders and it will do well to keep its kerb weight in check – well below the 182kg mark of the RE Himalayan.

While the engine of choice in this new motorcycle is limited to speculation at the moment, Hero’s 200cc, 18hp motor from the Xtreme 200 S concept showcased at the 2016 Auto Expo is most likely to make the cut (albeit in fuel-injected guise – the Expo engine was carburetted) for its promised mix of performance and fuel efficiency. An alternative would be the Karizma ZMR’s 223cc, 20.2hp, fuel-injected mill, a heavier but refined unit that could also suit this motorcycle’s intended purpose admirably, provided the chassis has been beefed up suitably. Stay tuned for more!