Existing Harrier owners can pick a unique Harrier badge and scuff plates; and also get a free 40 point service check-up and car wash. 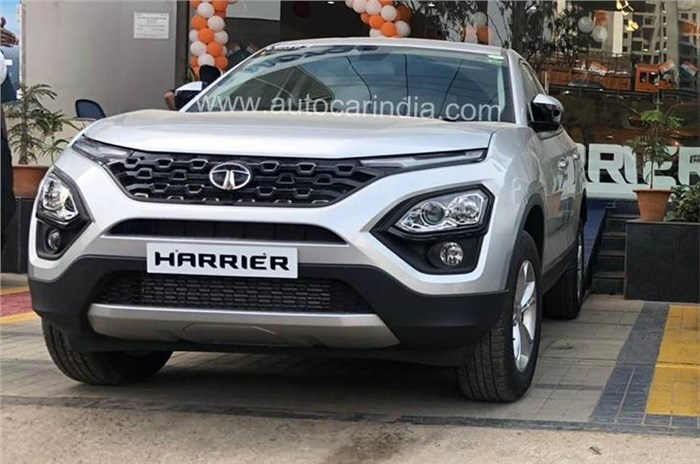 Tata is offering some additional benefits to Harrier customers and existing owners to mark the first anniversary of the SUV. Owners are being offered several benefits including a free 40 point service check-up at authorised service centres, and a free car wash and vacuuming.

Owners can also choose to customise their Harriers with a personalised Harrier badge and unique scuff plates, aside from availing of the aforementioned services. They have the chance to sign up for the Harrier Service Gold Club as well, to avail of benefits up to Rs 8,400 on future services of their vehicles in the next two years. Tata says that owners can book these services online or avail directly at the company's service outlets on January 9-19, 2020.

Those referring the car to friends or family are also eligible to receive an Amazon Gift Voucher worth Rs 5,000. Although the carmaker has said that the referral should be prior to January 31.

The Harrier SUV was launched in India early last year it was shown in concept form at Auto Expo 2018. Powered by a 2.0-litre diesel engine, the Harrier is available in four trim levels; and the carmaker also offers a blacked-out iteration of the top two trim levels of the SUV called Dark Edition.

In coming months, Tata is set to expand its product line-up with the introduction of multiple models. The carmaker is set to launch its all-new Altroz premium hatchback on January 22. The Nexon facelift and its electric counterpart are also expected to go on sale soon.

The Gravitas, Harrier's seven-seat sibling is being readied for a launch too. In addition to the third row of seats and unique rear styling, the seven-seater will also get a more powerful and BS6-compliant version of the 2.0-litre diesel engine currently in the Harrier. The latter will receive the same upgrade when it makes the shift to the new emission norms, as well as an automatic gearbox option.

Tata is also working on a new, fully-loaded variant of the Harrier. Additional kit on this model includes a panoramic sunroof and larger, 18-inch alloy wheels. Presently the Harrier can be had with a regular sunroof as an official accessory.

In terms of rivals, the Harrier goes up against the hot-selling Kia Seltos, the MG Hector, the Hyundai Creta, the Nissan Kicks and the Renault Captur in the Indian market.