New Tata Gravitas will take on the 6-seat MG Hector and the new Mahindra XUV500. Here are the facts and figures that make this battle of the three-row SUVs interesting. 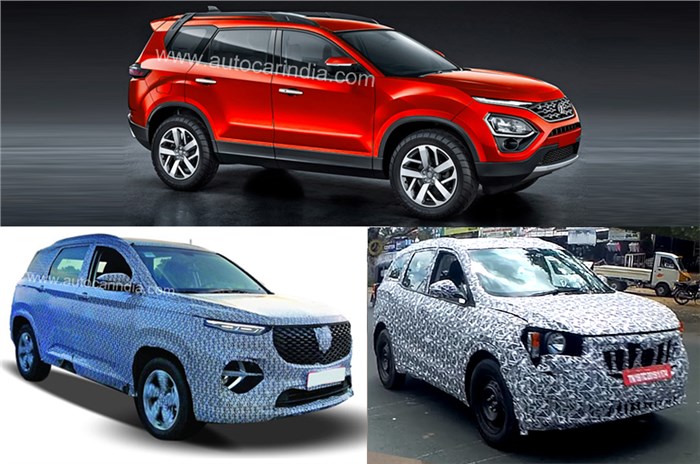 With the upcoming Gravitas, Tata hopes to offer all that people like about the Harrier but with the added flexibility of a third row of seats at the back. However, the Gravitas will be more than just a Harrier with an extra pair of seats. 80mm taller, 63mm longer at the rear overhang and sporting an upright tailgate, the Gravitas will be immediately identifiable as the larger of the Tata SUVs. It will also be the first of the Tatas to feature a BS6-spec version of the Fiat-sourced 2.0-litre Kryotec engine, with power upped to near-170hp from the existing 140hp. What’s more, the Gravitas SUV will also get the option of an automatic transmission, something that’s been missing on the Harrier thus far. Further down the road, there will also be the option of a petrol engine.

Going by these facts, the Tata Gravitas sure sounds promising. However, this will not be the only new three-row SUV in the Rs 15-20 lakh bracket. MG is working on a 6-seat Hector, while Mahindra will be out with the second-gen XUV500 in early 2020. While final details of the latter two SUVs are yet to be revealed, there’s enough information to judge what the Tata Gravitas will be up against. Read on to know:

The Tata Harrier has faced stiff competition from the MG Hector since the latter’s arrival in mid-2019. And it’s sure to be a close fight when talking of their three- row versions too. The three-row MG Hector is likely to get a new name and will sport revised styling at the front and the back. Going by the China-spec model, the this version will be longer than the standard model by 40mm on account of its redesigned bumpers. In length, the MG will be 34mm longer than the Tata. However, the Gravitas will be marginally taller (26mm) and wider (59mm).

The biggest point of difference in their interiors will be the seating configurations. While the Gravitas will get a conventional 7-seat layout, the three-row Hector will have six seats, with a pair of captain’s chairs in the middle row. Buyers will have to choose between the Gravitas’ flexibility of seven seats and the Hector’s luxury of individual middle row seats. What remains to be seen is if Tata will go the distance to give the Gravitas goodies like connected tech, a panoramic sunroof and 360-degree, all of which will be part of the MG.

With the Gravitas, Tata will close the gap to the MG in terms of power. Both SUVs will use BS6-spec versions of Fiat’s Multijet II 2.0-litre diesel engine, with power in the region of 170hp. The Tata will be the only one with a diesel-automatic engine-gearbox option. The MG, on the other hand, will be the only one to come with petrol power. MG’s 1.5-litre turbo-petrol engine (with the 48V mild-hybrid system and manual and automatic options) will make their way to the 6-seat Hector too.

For a long time, it was the Mahindra XUV500 that straddled two segments by offering seating for seven in a price bracket dominated by five-seat SUVs. And the XUV’s relatively large size has always been a plus for buyers looking for a large SUV. Come April 2020, we’ll have the all-new XUV500 and it’s easy to tell why the battle between the Mahindra and Tata SUVs will be so interesting.

The next-gen Mahindra XUV500 is expected to be marginally larger than the outgoing model, which means it will be very close to the Gravitas in length, width, height and wheelbase. In effect, cabin space should be on par too. Also, like the Tata, the XUV500 will come with a conventional 7-seat arrangement.

Mahindra is big on diesels and the new XUV500’s 2.2-litre unit will be big on power too. Expected to produce somewhere around 180hp, the XUV’s engine will likely have an edge over the Tata’s 2.0 unit in outright power. Then again, weight, gearing and multiple other factors can impact performance, so we’ll have to wait and watch how that translates in real-world performance. Like the Gravitas, the XUV will get the option of manual and auto options, though only the Mahindra is expected to be offered with all-wheel drive. Again, a petrol engine option is something you’ll get on the XUV500, and not the Gravitas.

How would they compare on price?

We expect the three SUVs to sport price tags in the range of Rs 15-20 lakh (estimated, ex-showroom). In effect, what we’ll have are three SUVs that are similar in size, power and price. So which one would be the pick of the trio? We can’t wait to fast forward a few months to tell you just that.

Which of the three SUVs are you most excited about? Let us know in the comments section below.