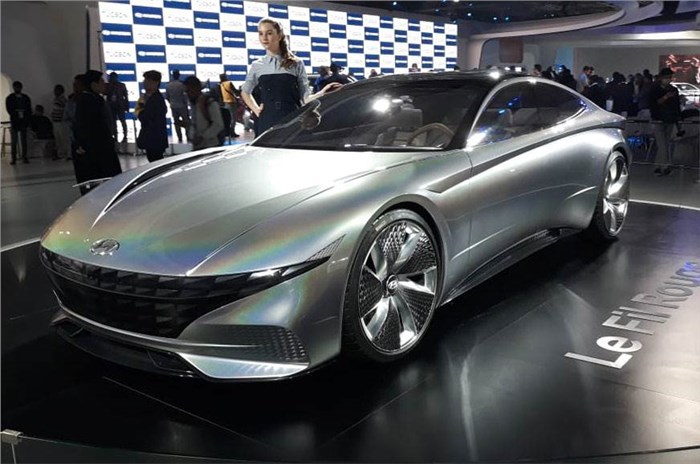 Hyundai has on display the Le Fil Rouge (HDC-1) concept at the Auto Expo 2020 – a model that showcases the brand’s future design language. While the concept was first unveiled at the 2018 Geneva motor show, this is its first showing in India.

One of the main areas of focus with the Le Fil Rouge (HDC-1) concept is its design. The concept uses Hyundai’s new Sensuous Sportiness design theme which can be seen on other models like the Kona Electric, Nexo and Santa Fe SUV. Hyundai claims that the Le Fil Rouge concept uses the golden ratio to have an aesthetic and natural-looking design. The concept features a large front grille with integrated headlights, and steeply raked pillars that give it a sweptback look. Additionally, the short front and rear overhangs, and long wheelbase, give the Le Fil Rouge concept a well-proportioned, coupé-like appearance.

On the inside, the Le Fil Rouge's design is minimalist, with the displays for the joint digital instrument cluster and infotainment system taking centre stage on the dashboard. The wood inserts around the dash also add a level of sophistication, while the rest of the interior design aids the sense of space.

Many of the design elements of the Le Fil Rouge (HDC-1) concept were carried over to the new Sonata sedan which made its debut at the 2019 New York auto show. The eighth-generation Sonata adopted the sporty, four-door-coupé-like body style of the concept, which was quite a departure from its predecessor’s sedan silhouette.