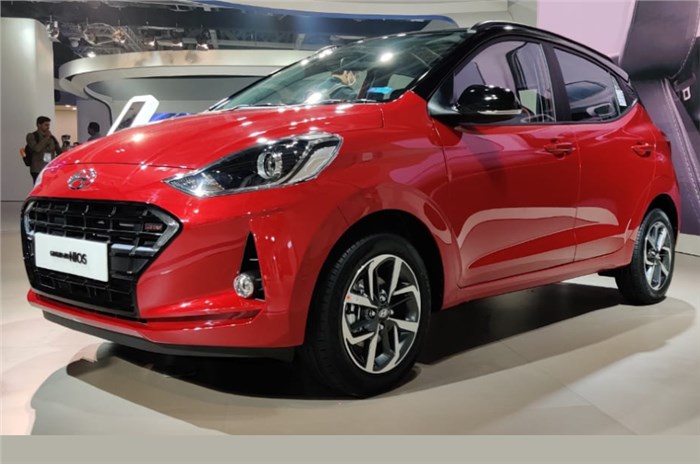 The Hyundai Grand i10 Nios range will see the introduction of a new turbo-petrol variant. Revealed at Auto Expo 2020, the new 100hp Nios joins the ranks of India’s most powerful mass-market hatchbacks.

The sporty Nios is powered by Hyundai’s 1.0-litre, three-cylinder, direct-injection turbo-petrol engine. The engine made its debut in India on the Venue, and was also rolled out on to the Aura compact sedan recently. Like the Aura, the Nios gets the engine in 100hp and 172Nm state of tune, while on the Venue, the engine makes 120hp but the same 172Nm. Again, as on the Aura turbo, power is sent to the front wheels via a 5-speed manual gearbox, and there’s no option of an automatic. Just for reference, the Venue 1.0 comes with the option of 6-speed manual and 7-speed dual-clutch transmissions.

Along with the ‘Turbo’ badging on the grille and boot lid, the Grand i10 Nios turbo also gets a blacked-out grille and a black roof to differentiate it from the standard versions. An all-black interior theme with sporty contrast red stitching adds sportiness to the cabin. The Nios turbo-petrol will likely be offered in one variant based on the Sportz trim.

Expect the Grand i10 Nios turbo to cost about Rs 50,000-70,000 more than the top-spec 1.2-litre petrol-manual. Buyers looking for a zippy runabout would do well to wait for this one.