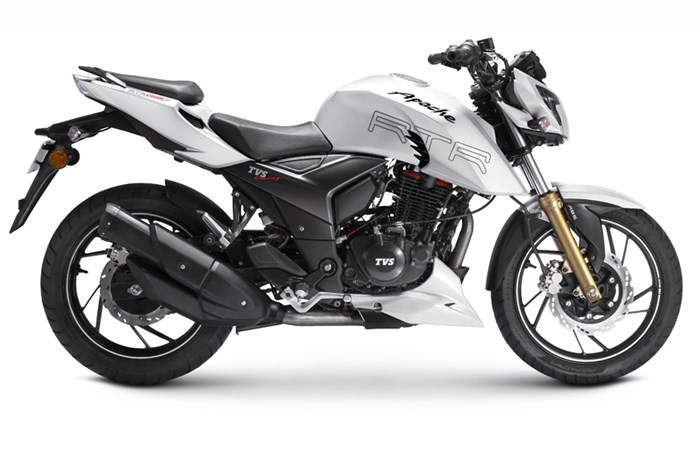 TVS Motor has launched the Apache RTR 200 4V with ABS in our market, priced at Rs 1.07 lakh (ex-showroom, Delhi), and will only be offered in the carburettor variant. The ABS version carries a premium of Rs 8,800 over the standard model that comes with Pirelli tyres. It’s also the only motorcycle in the 200cc segment to offer dual-channel ABS, as the Bajaj Pulsar NS 200 and the upcoming Hero Xtreme 200R get single-channel ABS as an optional extra. Apart from ABS, TVS has also equipped the motorcycle with Rear Wheel Lift-off Protection (RLP) control, where a gyro-sensor works along with the ABS system to prevent the rear-wheel from lifting under hard braking.

With the addition of this new variant, the TVS Apache RTR 200 portfolio now consists of four variants, as TVS had launched the fuel-injected version in November 2017. Apart from the addition of ABS, no mechanical or cosmetic updates have been made on the 200cc motorcycle. Powering the bike is a single-cylinder engine delivering 19.7hp at 8,500rpm, with the peak torque of 18.1Nm arriving at 7,000rpm. The powerplant is mated to a five-speed gearbox.

The addition of a dual-channel ABS on the Apache RTR 200 is a welcome move, though we feel that even the fuel-injected variant should have received the safety net of ABS; it has been avoided to keep costs under check.