Volkswagen Motorsport’s Frankenstein monster, the Polo RX, has a mid-engine, rear-wheel drive and 240hp. We get behind its wheel and hang on... tight. 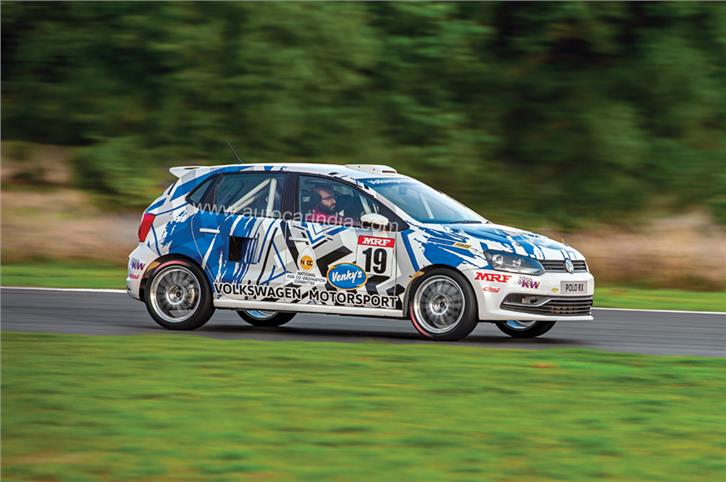 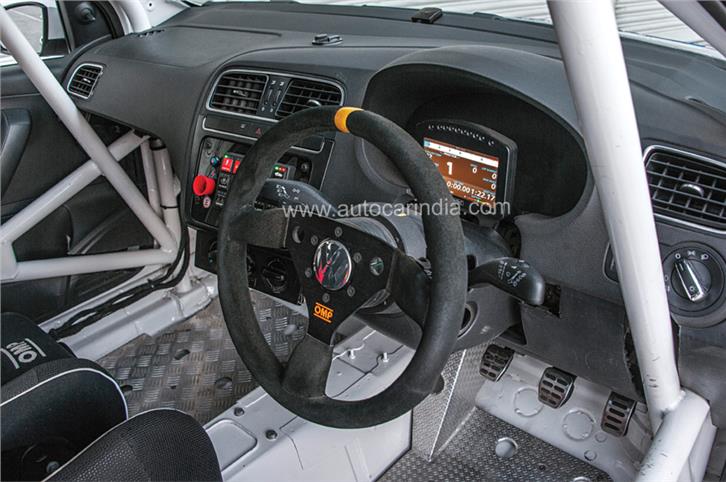 Bare-bones interior comes with an OMP race seat and harness.

To the uninitiated, this might look like a tarted-up Polo with some vinyl graphics and a set of cool wheels. Some might even notice the roll cage and racing seats. But look closely and you soon realise that the rear is not normal.

The mid-engined Polo RX is what Volkswagen Motorsport calls its ‘winter project’. A group of young engineers essentially took a bone-stock base model Polo and cut a huge hole where the rear seats, spare wheel well and fuel tank lay. They then got themselves the front-end internal monocoque bits of yet another Polo, flipped it by 180 degree and welded it in. Suspension points, engine mounting points, suspension arms and both the strut towers, and even the steering rack were plonked in. So in place of rear seats, you now get Volkswagen’s banging four-cylinder, 1.8-litre, turbocharged engine, codenamed the EA888 – the same Audi-engineered one you get in a Polo GTI. 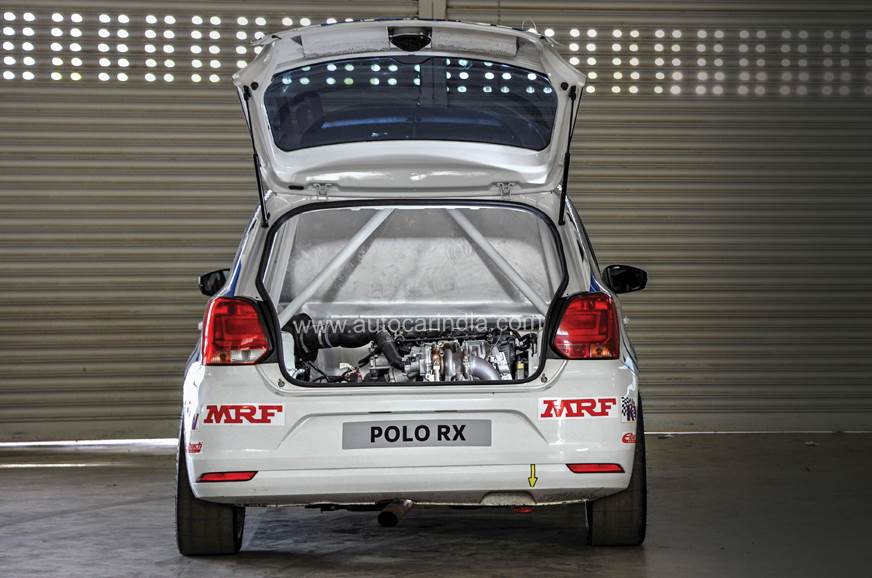 The 1.8-litre, turbocharged 4-cylinder engine makes 240hp and 345Nm of torque, and runs a race

But that was just the first step. They then had to go about strengthening the whole body so it could handle the torque, this calling for a highly complex roll cage. Other bits that were shifted around included the intercooler for the turbo mounted just behind the new firewall which is constructed between the cabin and new rear engine bay. The fuel tank (fuel cell), of course, moved to the front, while the cooling system still stayed up front. 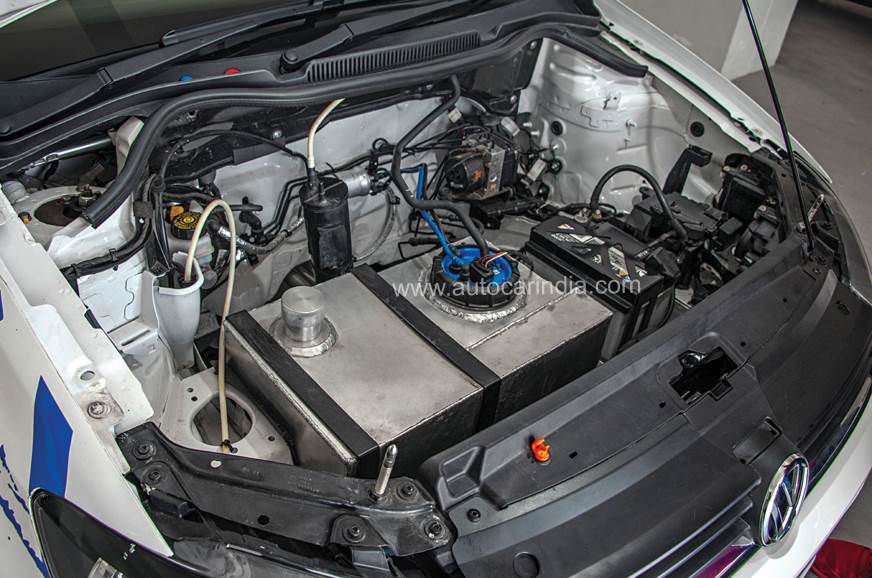 The gearbox is a racing unit made by a company called 3MO, and it’s the same sequential 6-speed one used in the Ameo Cup race cars. The front brakes aren’t stock either. In fact, while the rear brakes on this car are in essence the front brakes of a Polo GTI, the front brakes are from a Golf R
and they are, well, HUGE!

So let’s talk numbers. The engine makes about 240hp and 345Nm of torque. The turbo makes about 17.5 PSI of boost and the car weighs just 1,100kg, giving it a power-to-weight ratio of about 218 horsepower per tonne. And as with the race cars, this Polo RX too is controlled by a MoTec standalone ECU.

To start the Polo RX, you don’t simply turn a key; you follow a long-winded sequence. First you press the main power button that turns on the high-pressure fuel pumps, then the ignition button and finally the start button, and it comes to life with an angry growl and hiss. Engage the clutch (which you need only to get moving in first gear, to bring the car to a halt or to reverse), pull on that right-hand paddle, and the shifter actuators engage the gearbox with a solid “thunk”. 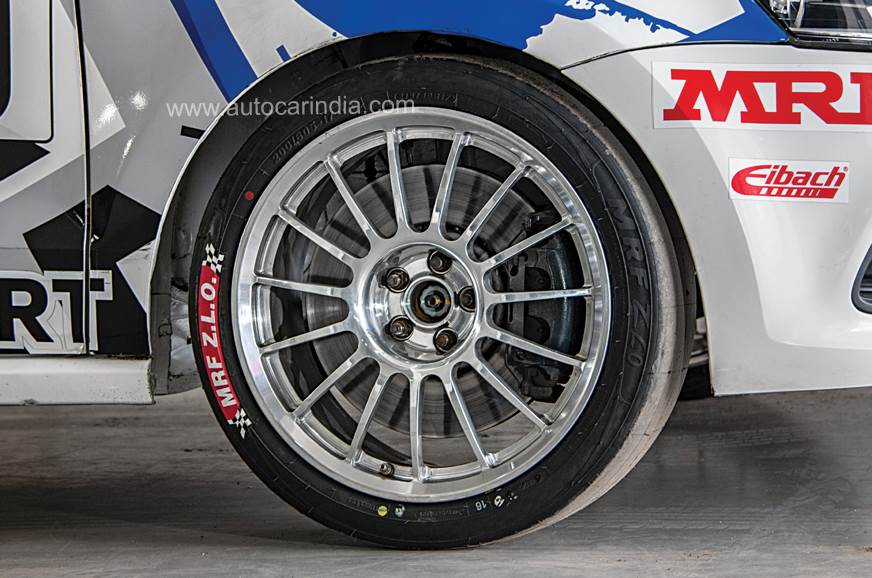 The MRF ZLO racing slicks are mounted on 17-inch forged wheels made by Wheels India and weigh only 6.5kg.

Out on the Madras Motor Race Track (MMRT), you get absurd levels of acceleration and grip from the MRF ZLO slick tyres. The wheels are about 30 percent lighter and over 50 percent stronger than the Team Dynamics wheels Volkswagen Motorsport has been using so far.

Get to a corner and this Polo WILL demand your respect. While the Ameo Cup race car can be chucked into a corner slightly shabbily, the Polo RX’s rear-biased 45:55 weight distribution and short wheelbase mean you need to be neat and deliberate with the rear end. It must be in absolute sync with what that front end is doing. If you grab it by the scruff of its neck and hurl it around, the car will snap into oversteer – yes, even with those massive slicks in the rear. 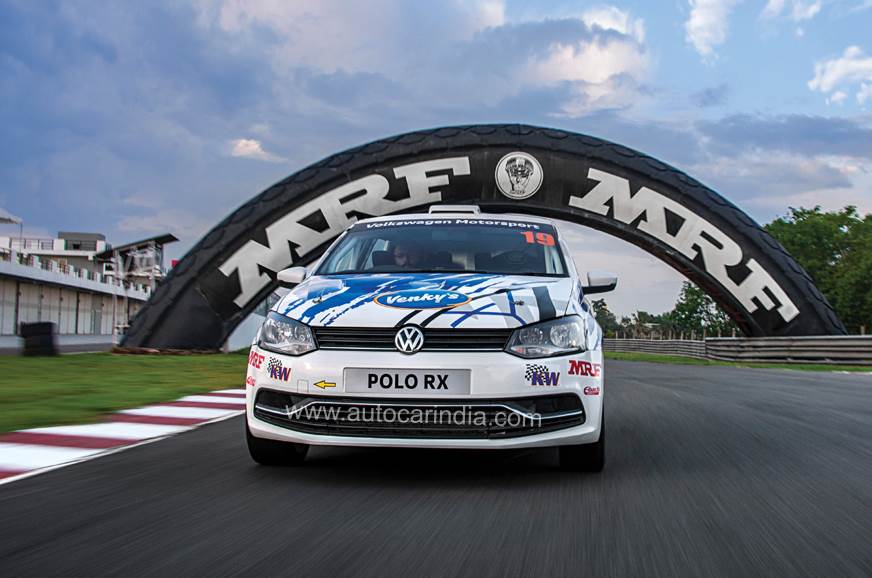 That said, if you are neat and tidy, with the extra weight at the back and the drive going out the rear wheels, you can put a lot of power down. And then there’s the fact that the front wheels are free to only steer – what you get is an incredibly pinpoint precise feel. I don’t think I can remember another car I have driven in the recent past that feels so accurate on the turn-in, apex and on the way out of the corner. In fact, the Polo RX is probably the perfect vehicle to actually teach budding race-car drivers how to be precise and smooth with a mid-engine, rear-drive car on a racetrack. And the front end does feel a little light. The moment you are done with a corner and have all four wheels pointing straight, you can floor the throttle and unleash all the power. 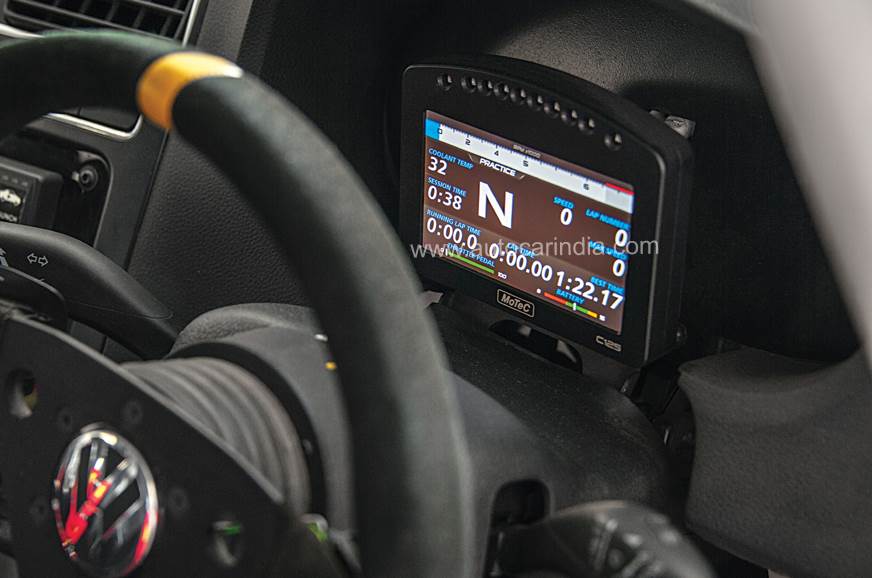 The instrument console is a race-ready MoTec screen.

Go through the gears and the MoTec instrument cluster shows a quickly rising number, accompanied by the sound of a muffler-less exhaust and a loud electric turbo wastegate. It is hot, loud, uncomfortable (obviously) and all of these things make it the perfect toy for a grown-up racer or budding aspirant. It makes you feel alive, even slightly scared of it, especially if you don’t have god-like reflexes or professional race-car driver skills.

If a one-word answer could sum up my driving experience over the 25-30 odd laps that I did manage at the MMRT, it would be ‘brutal’.

If you approach Volkswagen Motorsport and ask them to build you a Polo RX, they will. And not only will they build you one in this spec, with 240hp (for track use only, of course), but also with figures upward of 300hp if you ask nicely. In fact, they can even make you an aero package with a rear wing, which will give you some real usable downforce, and a front splitter that will help turn the car into a corner even quicker. And while there is no real price tag on it just yet, if you do have a ton of money stashed away, live somewhere near a racetrack and want to feel alive every time you press the start button, this is probably a great tool for the job. How I wish they’d make a street-legal one too! 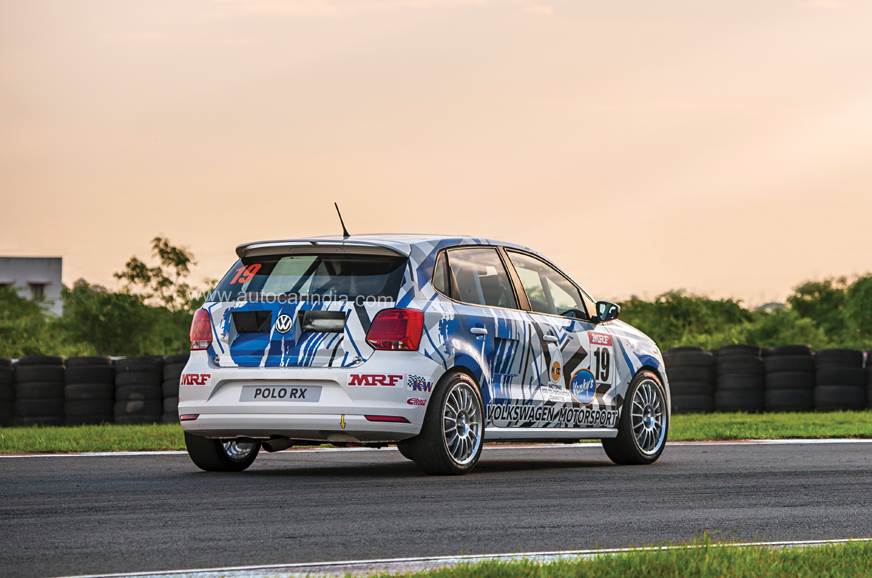