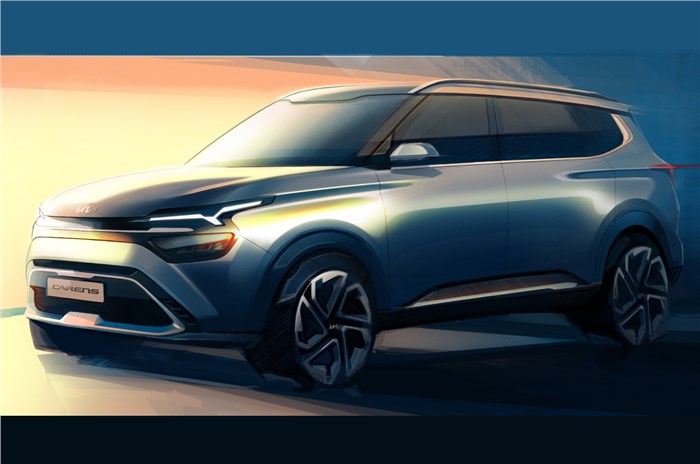 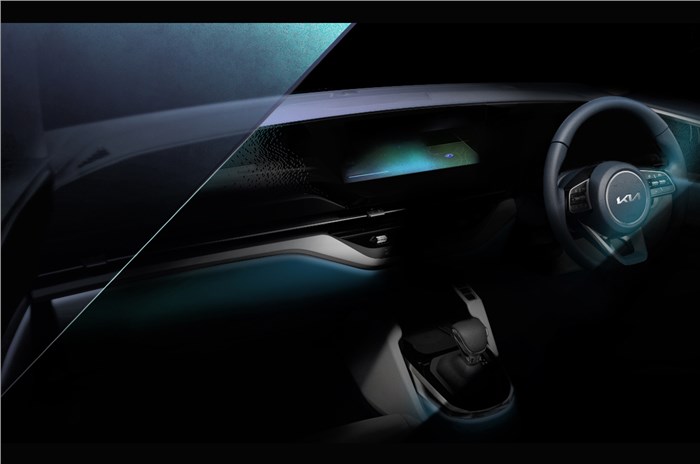 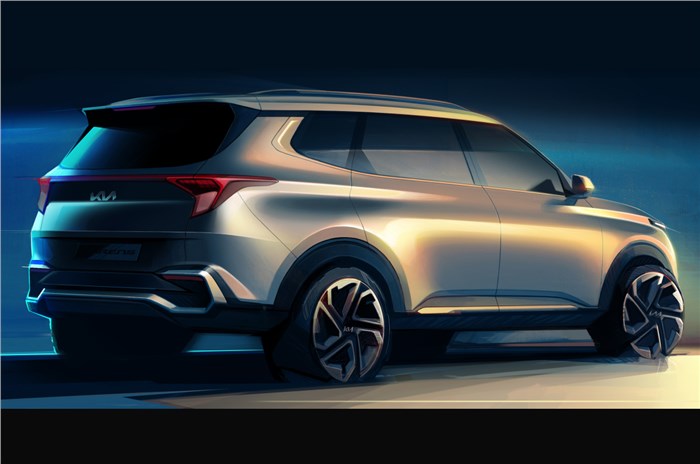 Three-row Kia Carens gets SUV-like styling; will go on sale early next year.

Ahead of its global debut next week, Kia India has released design sketches of the upcoming Carens three-row vehicle, giving us a hint of its final design.

Kia Carens: what do the exterior sketches reveal?

Kia India has revealed exterior and interior sketches of the upcoming Carens. While Kia does not call it an MPV, the sketches do make it look more like a cross with one, but with an SUV-like stance.

Kia calls the Carens' front-end look the 'Tiger Nose design' and we can expect to see similar styling cues on future Kia models. Up front, the Carens features a flat bonnet design, with an upright nose and a chunky front bumper that gets a strong separator line between the top and the air intake at the bottom. The Carens features a twin headlamp design with slim, wraparound lamps and a relatively smaller grille. The main headlamps are positioned below the slim units and are expected to come with an LED set-up, at least on higher variants. The daytime running light inserts on the headline mimic newer Kia models like the Sportage SUV, which has been recently unveiled overseas.

On the sides, the Carens gets a slightly slab-sided look, with large wheel arches and body cladding that runs across the length of the vehicle. A strong character line emerges from the headlamps and blends in with the front door. The pattern continues with another character line emerging from the rear door and meeting the tail-lamps. Speaking of the tail-lamps, the design is unlike on any Kia model sold here. They extend from the rear fender, similar to the Tata Punch, and also have extensions below, with both units connected via a lightbar in the centre. The tailgate gets multiple horizontal creases, with a prominent one running across its width, neatly merging on the rear wheel arches. Similar to the front, the rear bumper too is chunky and complements the Carens' SUV-like looks with multiple design elements like two faux silver bits, among others.

Kia Carens: what do the interior sketches reveal?

Kia has also revealed interior sketches of the upcoming Carens. The interior of the upcoming three-row model was previewed via a leaked image, giving us a clear idea of the model's premium-looking dashboard and other bits.

The sketches show that the Carens will have a large dashboard that extends a bit further towards the front windshield. Kia has confirmed that the model will get a 10.25-inch infotainment screen for higher variants while the lower spec trims could get an 8.0-inch unit that was spotted earlier.  The instrument cluster will be fully digital and the steering wheel is similar to the one seen on the Seltos and the Sonet, with multifunction buttons for audio controls, voice commands, among others.

While Kia has not announced any details on the seating options, sources tell us that the Kia Carens will come in 6- as well as 7-seat configurations, depending on the variant. Expect more creature comforts for the second- and third-row passengers, in terms of multiple AC vents, cup holders, soft-touch materials for all three rows and also a plethora of USB ports; the second row could also get wireless charging.

The Kia Carens is expected to be powered by the brand’s 1.5-litre petrol and diesel engines. Both these engines are already offered with the Seltos and Sonet. Power and torque figures, as well as gearbox options, are also expected to be similar to the Seltos.

The Kia Carens KY will be shown for the first time on December 16, and a market launch is expected before the end of this financial year, which means around February or March 2022. The Kia KY Carens will be made here in India and exported to other countries. It will see competition from the Maruti Suzuki XL6 facelift, which is also expected to hit the markets around the same time period. Additionally, the vehicle will also rival the likes of the Hyundai Alcazar, among others.

Sister-brand Hyundai is also expected to get a version of the Kia Carens. This new model will be called the Hyundai Stargazer and will be shown in Indonesia first. Sources tell us that while the platform and powertrains will be similar to the Carens, the Stargazer will have a completely different exterior design, similar to the Hyundai Staria MPV that is sold overseas.

Kia KY to be christened Carens; world premier on December 16, 2021