Kia KY to be christened Carens; world premier on December 16, 2021

Upcoming three-row vehicle will be based on the Seltos' platform and share the latter's 1.5-litre petrol and diesel engines. 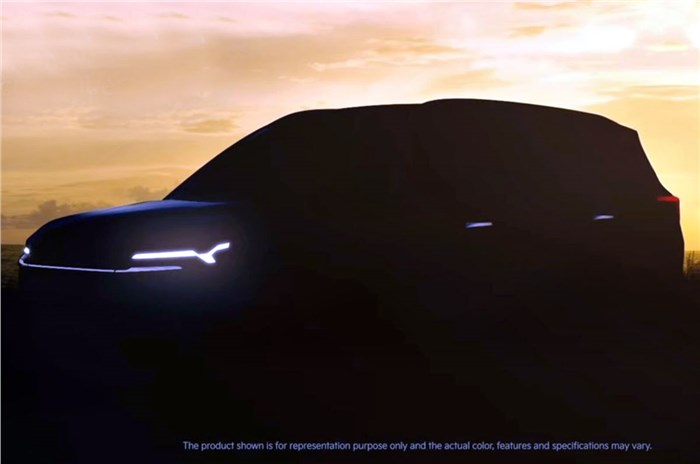 Kia has confirmed that its upcoming 7-seater will be called the Carens, ahead of its December 16 reveal. Internally known as the KY, Kia's fourth model for the Indian market is expected to share its underpinnings with the Seltos but with a longer wheelbase to accommodate a third row of seats.

The name Carens is not new for Kia, as the brand had a people mover with the same name on sale overseas for a long time. The name will see a comeback on this all-new model, which will be sold in India and overseas. Kia has been testing its upcoming three-row model for a while now, with images of test mules doing the rounds of the internet. These images reveal a model with a design in line with the Seltos but with a larger glasshouse and a longer wheelbase. The Carens is set to be longer than the Seltos, with dimensions expected to be similar to the Hyundai Alcazar.

A teaser video of the exterior also gives a glimpse of the car's profile, along with details such as the unique design of the LED daytime running lights, tail-lamps with a triangular light guide pattern, and what looks to be a light bar running the width of the tailgate. Inside, similar to the Sonet and Seltos, the Carens dashboard will be crowned by a high-set touchscreen flanked by a digital instrument cluster that's similar to the one in the Hyundai i20.

While engine details will only be confirmed following the debut, the Carens is expected to use the same 1.5-litre petrol and diesel engines as the Seltos. Gearbox options too are expected to be shared.

The Carens is touted as a “Recreational vehicle” by the brand.  It will rival the likes of three row models from Maruti Suzuki and also Hyundai which include MPV as well as SUVs among others.

Are you looking forward to Kia revealing its new three-row 'Recreational Vehicle'? Let us know in the comments.