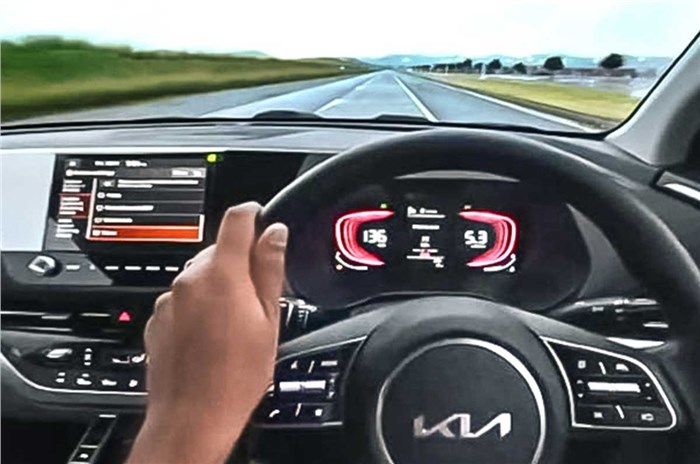 Three-row Kia KY will be a people mover with SUV-like cues and is expected to come with two engine options.

The upcoming Kia KY three-row vehicle has been spotted undergoing final round of testing almost every day. While there are a barrage of spy shots of the exteriors, we’ve finally got our hands on a fresh set of pictures today that give us a glimpse of the interior of the upcoming Kia KY.

Kia KY: What do the interior pictures reveal?

Fresh interior pictures reveal that the Kia KY will sport unique dashboard layout and, contrary to earlier speculations, will not have the same dashboard as the Seltos. The Kia KY (Carens) dashboard layout is much bigger and extends a bit further towards the front windshield, thanks to a slight cab-forward design typically seen in people movers.

First up, the spy shots are not of the top-spec variant but the one below, which could be the HTK+ variant in Kia’s naming system as the vehicle seen in the pictures does not have the full-size 10.25-inch screen which is standard on all top-spec Kia models in India, but has a smaller 8-inch unit which is seen on the mid-level variants here. The instrument cluster is also fully digital and while the outlines are different, the font for the numbers is quite similar to the unit that is seen on the Hyundai i20 in India. The steering wheel is similar to the one seen on the Seltos and the Sonet, and has multifunction buttons for audio controls, voice commands, among others.

Moving on to the centre, the 8-inch screen is positioned a tad higher and will be quite in the driver's eyeline, similar to the one seen on the Seltos. Expect features like Apple CarPlay, Android Auto and Kia’s UVO connect to be standard on the touchscreen-equipped variants. Higher variants could also get wireless charging and wireless operation for smartphone connectivity. The AC controls are positioned below the touchscreen and they seem to be digital units that will be controlled via buttons instead of knobs for fan speed and cooling. Top-spec variants could have multi-zone climate control system.

As far as seating options go, sources tell us that the Kia Carens will have six- as well as seven-seat configuration depending on the variant. There will be one touch tumble down feature for the second row seats as well. Expect more creature comforts for the second and third row passengers in terms of multiple AC vents, cup holders, soft-touch materials for all three rows and also a plethora of USB ports along with wireless charging for the second row as well. Expect some variants at the higher end to come with sunroof as well; however, it remains to be seen whether it will be a single pane or a panoramic unit.

The Kia KY (Carens) is expected to be powered by the brand’s 1.5-litre petrol and diesel engines. Both these engines are already offered with the Seltos and Sonet. Power and torque figures, as well as gearbox options, are also expected to be similar to the Seltos.

The Kia Carens KY will be shown for the first time on December 16, and a market launch is expected before the end of this financial year which means around February or March 2022. The Kia KY Carens will be made here in India and exported to other countries. It will see competition from Maruti Suzuki XL6 facelift, which is also expected to hit the markets around the same time period. Additionally, the vehicle will also rival the likes of the Hyundai Alcazar, among others.

A Hyundai version of the Kia KY Carens is being developed in Indonesia. The model be named Hyundai Stargazer and may come to India.