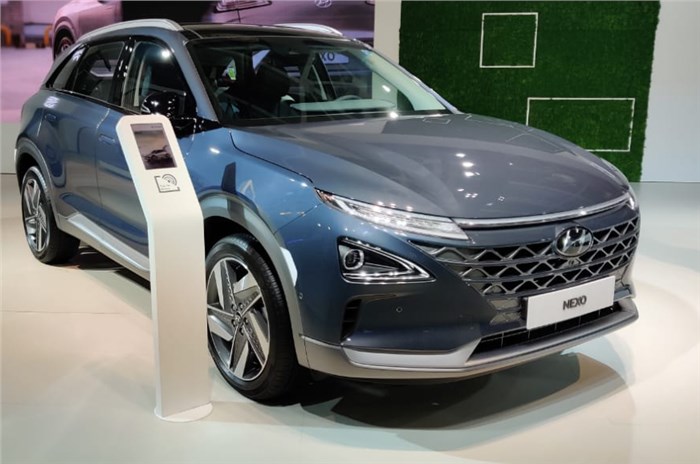 Hyundai has already announced that it is conducting a feasibility study on fuel cell electric vehicles (FCEVs) in India. And the Hyundai Nexo FCEV, on display at Auto Expo 2020, could be the first vehicle of its type to go on sale in India.

The midsize Hyundai Nexo’s source of power is a fuel cell stack. Chemical reactions within each cell between hydrogen (stored on board in three tanks) and oxygen from the atmosphere generate electricity that is used to power the Nexo’s electric motor. For those having a hard time recalling high school chemistry – the only by-product of this reaction is water. The Nexo’s three hydrogen tanks have a combined capacity of 156.6 litres, enabling a 666km range in the WLTP cycle. Impressively, the Nexo can be refilled in 5min, giving it an edge over typical battery electric cars that can take hours to juice-up their battery packs. Hyundai also claims that its fuel cell tech doesn’t see degradation in cold climates and can function in temperatures as low as -30deg C.

Powering the Nexo FCEVs front wheels is an electric motor that makes the equivalent of 161hp and 395Nm of peak torque that, Hyundai claims, enables a 0-100kph time of 9.2sec.

The Nexo also comes loaded with autonomous driving tech that includes a next-generation blind-spot monitor. Additionally, other features like Lane Following Assist (LFA) and Highway Driving Assist (HDA) are also standard. This innovative SUV is also fitted with a remote parking system, potentially enabling the car to self-park when required.

Hyundai is keen to use the Nexo FCEV as a technology demonstrator; but the fact remains that hydrogen is not a focus area in India. At the moment, the only hydrogen filling pump is in Delhi NCR which severely restricts the Nexo’s sales potential here – and that’s even before taking the price into consideration.