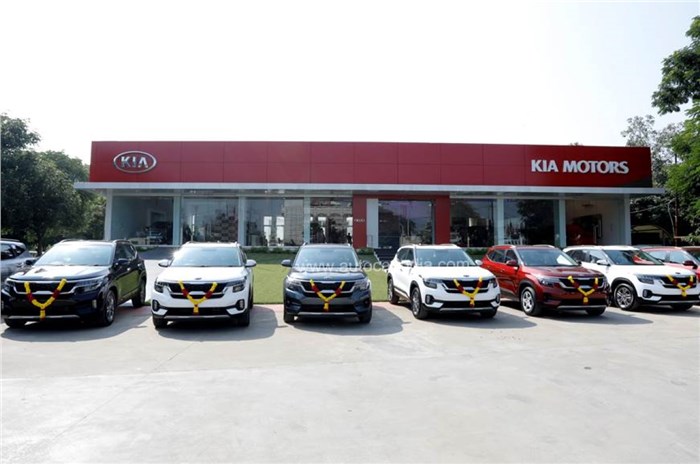 The Indian auto industry has posted a strong comeback after the phased relaxation of the nationwide lockdown, and while month-on-month (MoM) sales figures have been on a constant rise, August 2020 marked the first time since the COVID-19 pandemic struck that passenger vehicle (PV) sales overtook the numbers from a year prior.

Mass-market automakers posted total sales of 2,34,376 units last month, a substantial 20 percent increase over the 1,95,800 units of sales managed in the same period last year. However, the growth must be viewed against a 31.57 percent year-on-year (YoY) decline that PV sales experienced in August 2019, owing to various economic factors hurting demand. Still, last month’s recovery indicates a decrease in the influence of the pandemic on the domestic car market.

While only some carmakers managed to post a YoY improvement, almost all companies recorded positive month-on-month (MoM) growth. Total sales were 18.5 percent higher than the July 2020 numbers (1,97,733 units).

Let’s now take a closer look at the scorecard of each automaker:

Maruti Suzuki registered a 21 percent YoY growth and managed to breach the one-lakh-unit sales mark last month. Barring the mid-size category (Ciaz), all sub-segments of the car major’s portfolio showed an improved demand. The entry-level Alto and S-Presso (up 94.7 percent) showed the largest uptick in sales, thus corroborating a shift in demand towards the lower segment.

The company also completed its transition to BS6 with the introduction of the petrol S-Cross on August 5. Moving forward, Maruti has launches of the facelifted Swift and the new Celerio lined up in the coming months.

Moving 45,809 units, Hyundai posted a strong 19.9 percent YoY increase in sales in August. The company’s director for sales, marketing and service, Tarun Garg, has attributed the recovery to a good response to the Verna facelift, Grand i10 Nios, Aura and the recently launched Venue iMT, though it is the new Creta that continues to be a big driver of sales. After topping the SUV sales chart in May, June and July, the second-gen model furthered its strong performance by raking in 11,756 units of sales last month, outpacing its main rival, the Kia Seltos yet again.

Of all the automakers, Tata Motors witnessed the greatest year-on-year growth, albeit on a lower base. The home-grown car major sold 18,583 units last month, translating into a substantial 154 percent YoY increase compared to August 2019’s 7,316 units. Tata’s performance seems to have benefitted from the round of upgrades to its complete portfolio earlier this year. Moreover, in an effort to eliminate hidden costs, the company even streamlined its pricing structure last month.

Despite the ongoing economic downturn, Mahindra managed to record an incremental uptick of 3.8 percent YoY, with 13,651 units sold. Perhaps one of its most iconic models, the new Thar made its debut on August 15 and is slated for a launch on October 2. With more features, BS6 diesel and petrol powertrains, and the choice of either manual or automatic gearboxes, it’s expected to be less of a niche product and contribute more to sales than the previous version. Furthermore, the carmaker also streamlined prices and variants of the BS6 Marazzo MPV last month, reduced prices of the XUV300 to make it more competitive, and re-launched the XUV500 diesel automatic variant in BS6 guise.

Kia completed a year of operations in the Indian market last month, and the Korean automaker occupied the fifth position in the automotive sales chart for August, selling 10,853 units (up 74 percent YoY). More notably, the company recently revealed the production-spec Sonet compact SUV that is slated for a launch on September 18. Kia has also clarified that it intends to continue focusing on SUVs and MPVs in India, with no plans to enter the hatchback and sedan segments.

Renault continued to post strong numbers on the back of robust demand for the sub-four-metre, seven-seater Triber MPV. The French carmaker witnessed its sales grow 41.3 percent YoY to 8,060 units. August saw the company announce prices for the Duster with a 1.3-litre turbo-petrol powertrain. Moving forward, Renault is also readying its Kiger compact SUV that will take on the Hyundai Venue and Maruti Vitara Brezza in our market.

Though Honda posted a 9.4 percent YoY decline in sales to 7,509 units in August, it recorded a significant 39.5 percent improvement compared to July 2020. The Japanese car manufacturer recently announced prices for the updated Jazz that is now a petrol-only model. Moreover, August saw the first full month of sales for the fifth-gen City. With the new model poised to cater to the demands of discerning buyers, Honda has trimmed the variant line-up and dropped prices for the fourth-gen City in an attempt to widen its appeal.

Toyota was one of the automakers that had a difficult August – with just 5,555 units moved, sales plummeted by about 48 percent YoY. Even considering month-wise performance, there was an improvement of just 3.1 percent. However, the Japanese major is aiming for a turnaround with the launch of the Urban Cruiser compact SUV later this month. Toyota has already opened bookings for the Urban Cruiser and has revealed significant details about the entry point to its SUV range in India.

With 4,731 units of sales, Ford witnessed a near 14 percent YoY decline, albeit a 20 percent MoM growth in August. The American automaker recently added the Freestyle Flair to its crossover line-up as a special edition offering. The company is now working towards introducing an automatic gearbox option for the Figo hatchback’s 1.2-litre petrol engine.

MG continued recovery from the COVID-induced sales slump with a robust 41.3 percent YoY growth in August. With the three-row Hector Plus added to its line-up, the company managed to retail 2,851 units last month. Up next up from MG is the full-size Gloster SUV that is slated to arrive before Diwali this year.

Volkswagen was the only automaker in August 2020 to not only post a YoY sales decline (-36.3 percent), but also a monthly de-growth (-22.1 percent). VW’s India line-up currently consists of petrol-only models including the Polo hatch, Vento sedan, T-Roc mid-size crossover and the 7-seat Tiguan Allspace. The company is also looking at adding the facelifted Passat premium executive sedan to its portfolio in the coming months.

Skoda just about crossed the 1,000-unit sales mark in August, and while this translated into a 13.8 percent YoY decline, the figure was a slight improvement on the previous month’s sales of 922 units. The Czech car company recently opened bookings for the Rapid automatic that is scheduled to launch soon. Also in the offing is a petrol version for the Skoda Kodiaq SUV.

Nissan continued to witness troubled times in the Indian market with sales of just 800 units last month. With numerous models as well as diesel powertrains being discontinued for BS6, the company’s portfolio essentially consists of just the Kicks SUV for the time being, as well as budget offerings like the Redigo, Go and Go+ under the Datsun sub-brand. The automaker has now pinned its hopes of a recovery in the Indian market on the sub-four-metre Magnite SUV that is slated for an early 2021 launch.

Sales of the Jeep Compass have suffered in recent times owing to increasing competition in the mid-size SUV segment from the likes of the new Hyundai Creta, Kia Seltos, MG Hector and the Tata Harrier. FCA managed to sell just 468 units last month. Renewed interest in the model is expected with a facelift that is slated for an India launch early next year. Also on the cards for a 2021 launch is a three-row version of the Compass.

Though the Indian auto industry may have managed to mount a considerable comeback in August, the true test lies in maintaining those numbers in the coming months. And while the spread of COVID-19 cases continues, easing restrictions and the upcoming festive season do offer a sliver of hope.