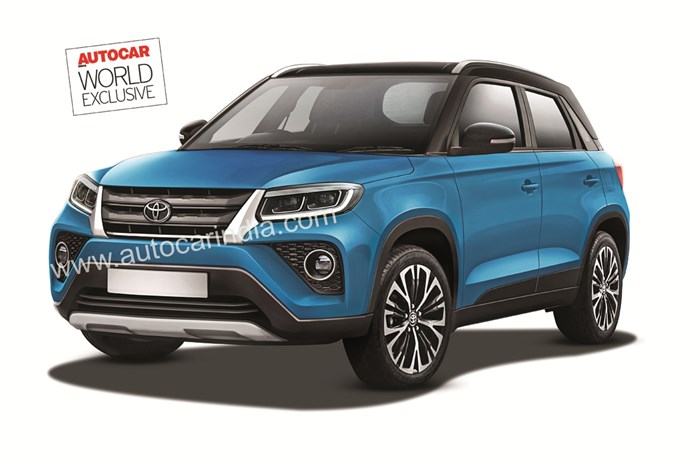 The Toyota Urban Cruiser is slated for a market launch next month, and we’ve got our hands on a world-exclusive first image of the new compact SUV that’s based on the Maruti Suzuki Vitara Brezza.

What does the Toyota Urban Cruiser's exterior look like?

Noticeably different from the car it’s based on. What’s confirmed from this image is that Toyota has done a much better job of giving the VitaraBrezza-based Urban Cruiser SUV its own identity, than it did with the Baleno-based Glanza, which looks nearly identical to its Maruti Suzuki counterpart.

Toyota has tried to make the Urban Cruiser look more like a rugged SUV, which is evident at the front, especially in the instantly recognisable twin-slat grille with its angular chrome frame, that mimics the Fortuner.This continues lower down, where the Urban Cruiser’s front bumper gets prominent cuts and creases, and also gets an in-built faux bull bar and brushed-metal-effect faux skid plate that helps it complete that butch SUV look. Apart from these changes at the front, which are all to the ‘soft’ parts and not the sheet metal, the Urban Cruiserwill look identical to the Maruti Suzuki Vitara Brezza, sharing all other body panels.

While the badge-engineered SUV’s exterior gets unique styling, things are not going to be quite as different on the inside.Expect Toyota to use lighter-coloured materials and upholstery for a more spacious feeling, but apart from that, the SUV will be all-but identical to the Vitara Brezza. It will also come with the same SmartPlay Studio touchscreen infotainment system that does duty in almost all Maruti Suzuki models as well as the Toyota Glanza.

What engine does the Toyota Urban Cruiser use?

Toyota will offer the Urban Cruiser SUV with the same 105hp,1.5-litre K15 naturally aspirated petrol engine as the Maruti Vitara Brezza as the only engine option. There will be no diesel engine option, just as on the Brezza.As far as gearbox choices go, a five-speed manual will be standard and there will be a four-speed torque-converter automatic available as well.

Where the Urban Cruiser will differ in this department,is that it will get mild-hybrid tech – including fuel-saving engine stop-start – with both gearbox options, as opposed to the Brezza, which only gets SmartHybrid tech on the automatic. This should help the Urban Cruiser manual better the equivalent Vitara Brezza’s 17.03kpl ARAI-rated fuel economy figure. The Urban Cruiser automatic, on the other hand, is expected to have the same 18.76kpl figure as the Brezza auto.

What warranty will the Toyota Urban Cruiser offer?

While Maruti offers a 2-year/40,000km standard warranty for the Vitara Brezza, Toyota is expected to offer a 3-year/1,00,000km warranty as standard on its upcoming compact SUV, which should give it an edge for buyers looking for lower ownership costs, as it did for the Glanza versus the Baleno.

Which are the Toyota Urban Cruiser’s competitors in the Indian market?

Toyota will start accepting bookings for the Urban Cruiser from August 22,2020. The Urban Cruiser launch will happen sometime in September, and it will go up against quite a few established rivals,including the Vitara Brezza itself. There’s theTata Nexon, Mahindra XUV300, Hyundai Venue and the Ford Ecosport, but another key rival will be the new Kia Sonet, which makes its world premiere tomorrow, and will go on sale around the same time as the Toyota Urban Cruiser.  Additionally, Renault will bring its compact SUV, the Kiger sometime in October followed by Nissan with the Magnite, early next year.