Nissan's Future Design Director is banking on sharp styling and a spacious cabin for the Magnite compact SUV to make its mark. 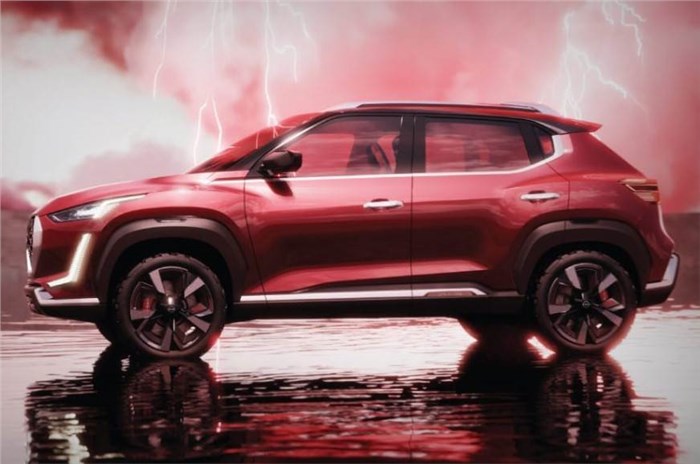 One of the big reveals of late, the Nissan Magnite Concept previewed a production-spec, sub-four metre SUV that is headed for our market in the coming months. While the official renderings provided a first look at the styling, Nissan Motor Corporation's Future Design Director, Kei Kyu, has given details about the concept's design philosophy, offering a glimpse at what more to expect from the carmaker's made-for-India SUV.

The designer mentioned that instead of a conventional upright profile, Nissan designers have opted to rely on bold styling cues to deliver an imposing stance. The Magnite features a broad, vertical front fascia that is dominated by a large octagonal grille, sleek headlamps and L-shaped LED DRLs. "Masculine and prominent shoulders display energy and strength," echoed Kyu. A sculpted bonnet, coupled with a horizontal beltline, beefy wheel arches and all-round body cladding add to the chunky look.

Notably, a recent spy shot of the production-spec Nissan Magnite revealed that compact SUV will remain largely true to the concept, save for exaggerated elements like the rugged scuff plate and off-road tyres.

The unmistakable Datsun grille points to the fact, that the Magnite was originally conceived to wear a Datsun badge but, last year, Nissan decided to pull the plug on its budget brand and brand the Magnite a Nissan. However, with the design frozen it was too late to change the grille but that’s no bad thing. In fact, the bold, hexagonal Datsun grille stands out more than Nissan’s signature ‘V-motion’ element and gives the Magnite a distinct identity. 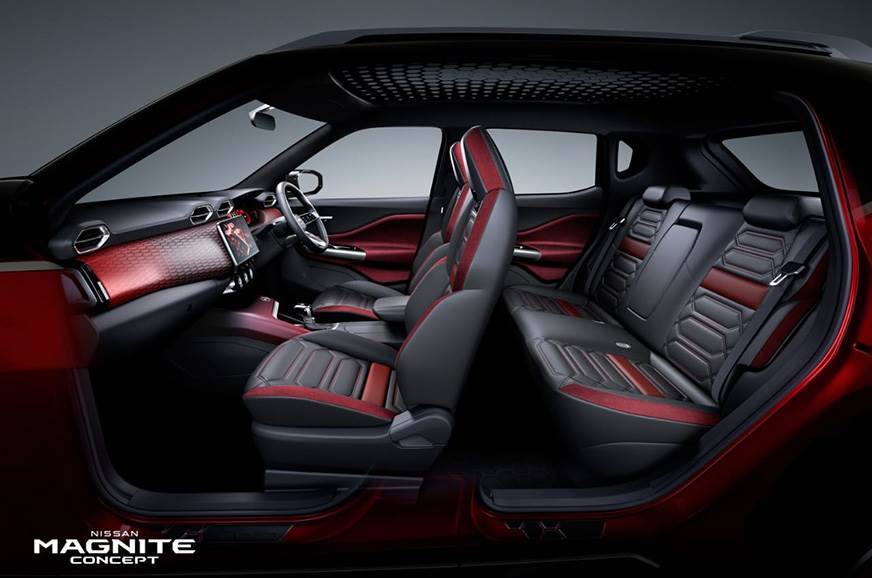 Official images recently revealed the Nissan Magnite Concept's interiors. A roomy cabin is touted to be a major point of distinction for the Japanese automaker's sub-four metre model and the concept was built around this philosophy. Kyu mentioned that the project aimed for roomy interiors right from the very beginning.

Explaining the design team's apprehensions in adopting boxy proportions, Kyu said "We could give a large headroom in the car, but then we'd lose the agile and stylish exterior proportions." The key to the conflicting demands was to strike a balance between exterior proportions and interior packaging through three major solutions.

Efforts were made to provide an upright seating layout to deliver a confident driving position. A wide cabin was also been given consideration while good knee room at the back was also deemed essential for the feeling of "perceived roominess". "We realised the importance of rear (seat) roominess in India. We found (customers') sensitivity to rear knee room to be higher than that to headroom. So that was a breakthrough," explained Kyu. He added, "We believe that we have achieved one-class-above overall roominess for the interior design."

Nissan has already confirmed that the Magnite will be a feature-rich offering. An 8-inch touchscreen, connected car tech, 360-degree camera, cruise control, steering mounted controls and automatic air conditioning will be part of the equipment list.

The Magnite will be offered with a choice of two 1.0-litre petrol engines - a 72hp naturally aspirated mill and a near-95hp turbocharged unit. While a 5-speed manual gearbox will be standard, both engines will come with a distinct automatic option - an AMT on the former and a CVT on the more powerful unit.

With a starting price of Rs 5.25 lakh (ex-showroom) for the entry-level variant, Nissan Magnite aims to undercut rivals like the Maruti Suzuki Vitara Brezza, Hyundai Venue, Tata Nexon, Ford EcoSport and Mahindra XUV300, as well as the upcoming Kia Sonet and Renault Kiger. Though the official word is that the model will be introduced in India 'within the financial year', our sources tell us that the company is gunning for a January 2021 launch.