Front end of the production-version Magnite has been revealed in a spy shot. 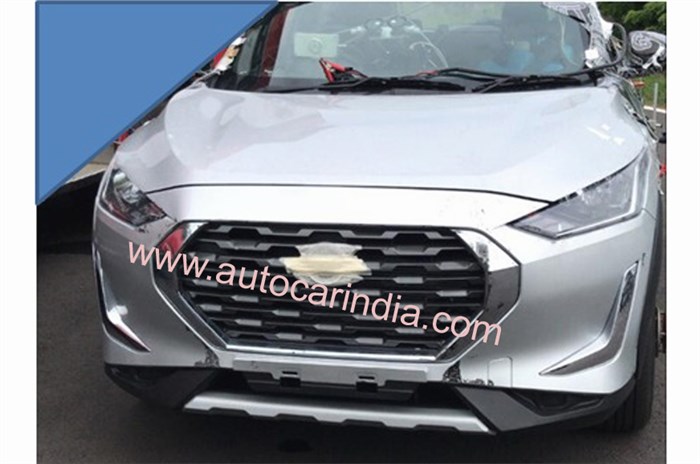 A spy image has emerged of the production-spec version of the upcoming Nissan Magnite, revealing the compact SUV’s front end. The Magnite made its world premiere in concept form on July 16.

How does it look compared to the concept?

The image confirms that the production-spec Magnite looks quite similar to the concept. It features the sweptback Kicks-like headlamps, the sculpted bonnet, and the large octagonal grille with chrome trim, as seen on the concept. However, what is different from the concept is the front skid plate and the tyres. The skid plate has four indents and looks more subtle now and where the concept was running on chunky, off-road tyres, the car in the image is shod with normal, on-road tyres. While it can’t be seen in the image, expect Nissan to tone down the design and wheel size too for the production version. This car also doesn’t have the red accent in the front grille that was present on the concept.

The car spotted in the image also appears to be a base or mid-spec variant, judging from the absence of the LED headlamps and the L-shaped LED DRLs in the bumper. The car in the image instead features some chrome trim in the bumper and what appears to be normal halogen headlights. Furthermore, the number plate bracket on the production-spec Magnite will be mounted below the front grille as is clear from the slats present in the bumper, and although it’s covered in the image, the Magnite will bear Nissan’s new logo.

What engines options will it get?

The Nissan Magnite will be available with two engine options – a 72hp, 1.0-litre, three-cylinder, naturally aspirated petrol engine and a 1.0-litre, three-cylinder turbo-petrol unit that’ll put out around 95hp. Both the engines will get manual gearboxes, with an AMT auto option available with the naturally aspirated engine and a CVT automatic option with the turbo-petrol unit.

What features will it get?

At the Magnite’s reveal, Nissan confirmed that the compact SUV will get features such as an 8.0-inch touchscreen infotainment system, connected-car technology, a 360-degree camera and cruise control. Top-spec variants will also get full-LED headlamps with L-shaped LED DRLs in the bumper. Automatic climate control and steering-mounted controls are also expected to be a part of the package.

When is it launching and what are its rivals?

The Nissan Magnite will go on sale in India in January 2021. Nissan is expected to price the SUV aggressively, starting at around Rs 5.25 lakh for the entry-level variant. In terms of rivals, the Nissan Magnite will compete with other compact SUVs like the Maruti Suzuki Vitara Brezza, Hyundai Venue, Tata Nexon, Mahindra XUV300, Ford EcoSport and the upcoming Kia Sonet and Renault Kiger.