Nissan Magnite concept’s interior reveals some of the features that can be expected on the production version. 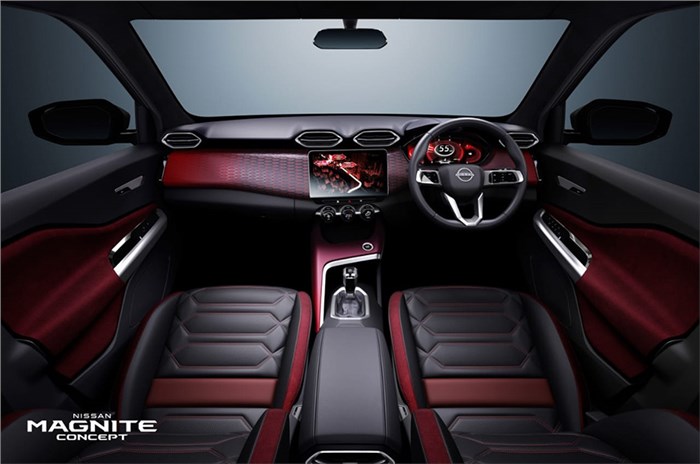 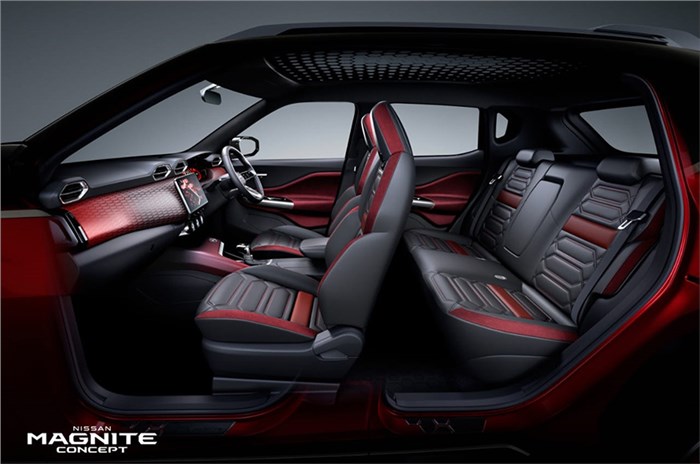 The Nissan Magnite compact SUV’s interior has been previewed by a set of images released by Nissan India of the concept car’s cabin. While the launch of Nissan’s smallest SUV globally is still some time away, these photos give us a clear hint of what to expect as far as design and equipment go. We tell you more about it.

What does the concept Nissan Magnite interior look like?

While we are yet to see the final production version of the SUV, from these images, we can confirm that Nissan is aiming to make the Magnite stand out, not just from the outside, but on the interior as well. The SUV will have a multi-layered dashboard with different textures, and also a generous amount of faux brushed aluminium to give it a premium look. While the dashboard design would look fresh to many, a closer look reveals that the bottom half is the same what we’ve seen on the Renault Triber MPV, and will also be shared with the upcoming Renault Kiger SUV.

What to expect on the Nissan Magnite features list?

As we’ve reported before, the Nissan Magnite is a make-or-break SUV for the Japanese brand in India and the company is throwing everything it has into this new model to make sure it stands out in the highly competitive compact SUV market. These images of the Magnite concept’s interior tell us the production car could come with features like an 8-inch touchscreen system, push-button start, automatic climate control, steering-mounted audio and telephony controls, powered mirrors, a rear centre armrest, rear AC vents and even a full-digital instrument cluster. What we can also confirm from our sources is that the production-spec Magnite SUV will come with a 360-degree camera and connected car features, as seen on the Kicks SUV.

What else we know about the Nissan Magnite?

In a nutshell, the Magnite will be Nissan’s contender in the very popular compact SUV segment. The model will be built on the Renault-Nissan Alliance’s CMF-A platform and will come with two engine options – a 72hp, 1.0-litre, naturally aspirated petrol (BR10), and a 1.0-litre, turbo-petrol good for around 95hp in the higher variants. As far as gearbox options go, the Nissan Magnite will come with a five-speed manual for both engine options, with an AMT on the naturally aspirated engine and a CVT on the turbocharged one. Alliance partner Renault will have its own sister car based on the Magnite, named the Kiger, that will share the platform and the powertrains, but will have a unique identity.

What will the Nissan Magnite price be?

We hear it will be very aggressive – sources tell us the base variant could start at around Rs 5.25 lakh (ex-showroom), and even the starting price of the turbo-petrol with its CVT automatic is expected to be less than Rs 6 lakh. A pricing strategy like this will position the Magnite SUV right at the lower end of the compact SUV segment, targeting value-conscious buyers who would also like the peace of mind of a Japanese brand. And with the feature list and powertrains on offer, Nissan’s critical compact SUV could just be the long-overdue win it needs in India.