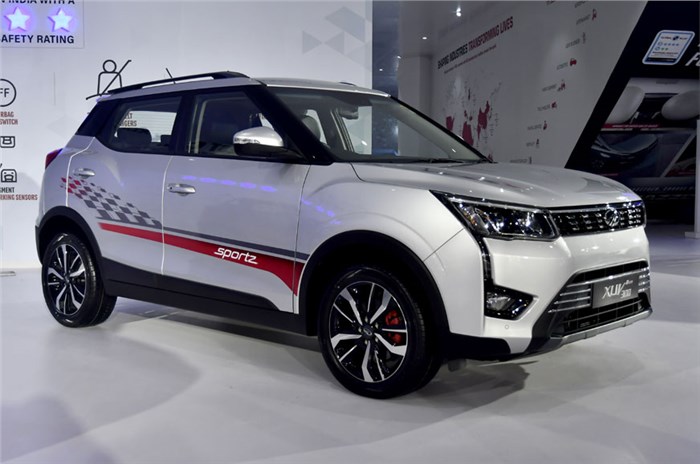 Mahindra unveiled a new variant of the XUV300 at the 2020 Auto Expo, badged as the Sportz. However, the XUV300 on display had more changes than just the cosmetics. The biggest talking point was the new 1.2-litre turbo-petrol engine under the hood, as hinted by the T-GDI nomenclature on the front number plate.

This compact SUV is powered by Mahindra’s new BS6-compliant 1.2-litre, three-cylinder, turbo-petrol GDI (Gasoline Direct Injection) engine. The new unit, part of the company’s mStallion family of engines, develops 130hp and 230Nm of torque, making it 20hp and 30Nm more powerful than the XUV300’s current BS6-compliant petrol engine. It is paired with a 6-speed manual gearbox.

Mahindra had previously revealed details on this T-GDI engine last year, at the time of announcing its BS6 engine line-up. The unit will also be shared with Ford for use in the EcoSport, as a replacement for its now-discontinued 1.0-litre EcoBoost unit.

To set it apart on the cosmetic front, the XUV300 on display gets body graphics, with ‘Sportz’ mentioned on both front doors and the red-finished front brake callipers. Compared to the standard model, the Sportz's cabin is all black and features red highlights on the dashboard and red contrast stitching on the seats.

The XUV300 T-GDI is expected to make the transition into a production variant, though it remains to be seen if the Sportz moniker of the car on display will be used as a means of differentiation over the petrol model currently on sale. The introduction of the new unit will also make the XUV300 the most powerful petrol compact SUV in the segment.

The XUV300 presently rivals the Hyundai Venue, Tata Nexon, Maruti Vitara Brezza and Ford EcoSport, with the list set to expand in the coming years to include the Kia Sonet, Volkswagen Taigun, Skoda Vision IN-based SUV and compact SUVs from Nissan and Renault.