Mahindra’s BS6 petrol portfolio will include two upgraded units and two new units, in addition to others in the pipeline. 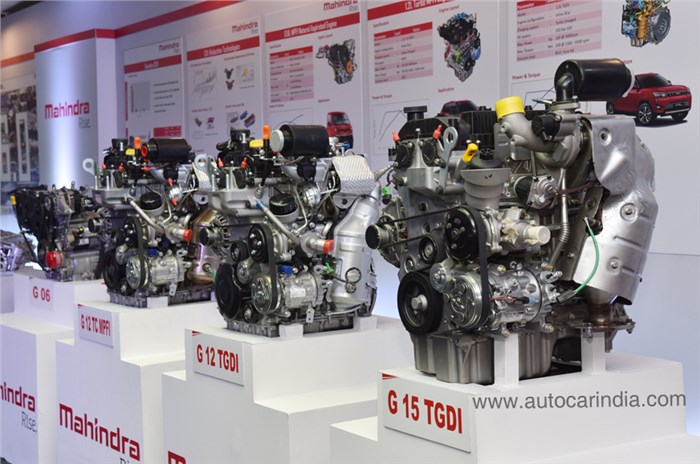 Ahead of the April 2020 deadline, Mahindra has revealed four of its engines that will meet the upcoming BS6 emission norms.Beginning with the smallest, Mahindra’s 625cc, naturally-aspirated single-cylinder unit that does the duty in the Jeeto commercial vehicle will be upgraded and continuedintwo states of tune. In the transition from BS4 to BS6, the engine will put out more power and torque than before – up from 11hp/38Nm and 16hp/38Nm to 23.2hp/48Nm and 20.7hp/44Nm, respectively.

The second petrol engine is the 1,197cc, three-cylinder, turbo MPFI unit that presently features in the XUV300 compact SUV. In its transition to meet the BS6 norms, the engine’s maximum torque output will drop 10Nm, from 200 to 190, while the power output will remain the same at 110hp. Around 25 percent of all XUV300s sold in India are powered by the 1.2 petrol engine, making it the most popular petrol in Mahindra’s portfolio.

Mahindra will also introduce a direct-injection version of the 1.2-litre, three-cylinder turbo unit in the future. This engine may also power the SUV that’s currently being developed by Mahindra and Ford. This direct injection version puts out a higher 130hp and 230Nm of torque, in comparison to the MPFI version;it features a 250bar GDI (gasoline direct injection) fuel system that improves performance and fuel efficiency.

The fourth engine is a 1.5-litre, four-cylinder turbo-GDI unit thathas been co-developed with SsangYong and produces 163hp and 280Nm or torque. Given the recent industry trend of using small-capacity turbocharged engines in SUVs, this unit may find its way in the next-gen SsangYong Korando SUV and future Mahindra models. The engine features a dual-mass flywheel, cylinder head with integrated exhaust manifold and low-friction piston rings, all of which the company claims results in lower NVH levels and higher efficiency.

Speaking about the two engines that are being upgraded, Prakash Rao, head of gasoline engines for Mahindra, said that having developed petrol engines only as recently as four years ago, the unitswere already using state-of-the-art technology. This means that the upgrade to BS6 norms would be easier and far cheaper too, with Pawan Goenka quotingan estimated hike of around Rs 20,000 only.

Mahindra will be upgrading the 1,198cc,three-cylindernaturally aspirated engine from the KUV100, and will also have a new engine that,for now, has been only labelled as ‘Future’.