Mahindra will introduce its first BS6 diesel engine later this year; will include seven updated and one all-new powerplant. 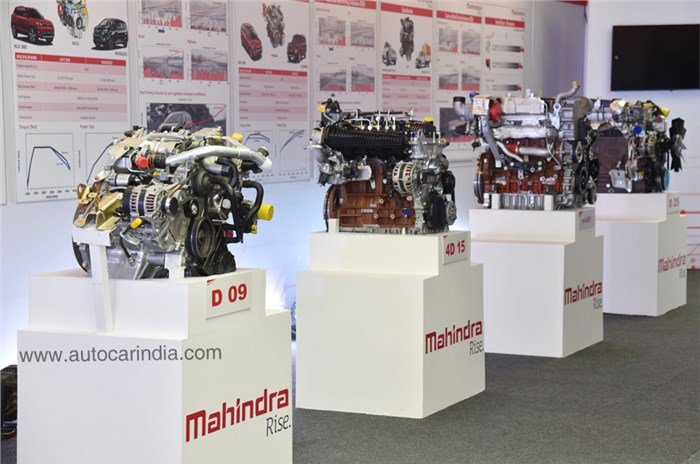 As reported by us a few days ago, the 1.2-litre, three-cylinder diesel motor that powers the KUV100 NXT will be discontinued, citing low sales. Mahindra has also teased an additional diesel mill, and for now has labelled it ‘Future’. That said, let’s dive a little deeper into the current line-up of engines and the expected updates.

Starting with the smallest capacity engines, Mahindra will update both the 600cc and the 900cc commercial vehicle engines that power the likes of the Supro and the Jeeto pickups. While both the engines will get turbochargers to meet BS6 emissions standards, the 900cc engine will also have a naturally aspirated version that will meet the upcoming regulations. These engines will not use the more expensive SCR or selective catalytic reduction (Urea Injection) but will use the more cost-effective LNT or lean NOx trap method to meet the BS6 regulations. For reference, the NOx and PM (particulate matter) content for BS6 as compared to BS4 is lower by 68 percent and 82 percent, respectively.

Moving against the convention of having fewer engines, Mahindra will offer three different mills in the 1.5-litre category – a three-cylinder unit and two four-cylinder motors. The 1,493cc, three-cylinder motor – the one currently used in the Bolero Power Plus and the TUV300 – will be upgraded to meet BS6 regulations. From the two remaining 1.5-litre, four-cylinder engines, the first one will be the 1,461cc motor that currently powers the Verito sedan while the second will be the new 1,497cc engine that powers the XUV300 sub-four-metre SUV and the Marazzo MPV. The latter will get an SCR or selective catalytic reduction system with a rear-mounted urea tank that will help reduce NOx emissions to meet BS6 regulations. The engines will also come with a DPF or diesel particulate filter.

Mahindra will also update the 2.2-litre, four-cylinder diesel engine that powers the Scorpio and the XUV500. It will be retained in its two states of tune – 155hp and 360Nm in the XUV500 and 140hp and 320Nm in the Scorpio –and be fitted with similar emissions control modules, an SCR system and a DPF, like with the 1.5-litre four-cylinder engine.

And finally, the largest displacement engine on offer by Mahindra in its current portfolio, the 2.5-litre, four-cylinder diesel will also get an upgrade. The engine, currently used in the Bolero commercial vehicle range and on the passenger version as well, will be available in two stages of tune –65hp/195Nm and 75hp/200Nm. Incidentally, this engine was originally introduced nearly three decades ago and has since then been honed and improved to meet emissions standards across different Bharat Stage norms.

With eight diesel engines going into the future, Mahindra is bucking the trend of rationalising and limiting powerplant numbers. However, the requirement for these engines stems from the many different platform configurations that the auto maker has used to build its products.

Pawan Goenka, managing director of Mahindra also confirmed that, although, prices for the new BS6 diesel-engined SUVs will increase, it will not be as substantial as other manufacturers have been quoted saying in the recent past.

The automaker has spent over Rs 1,000 crore on updating the engine family from BS4 to BS6, with over 69,00,000km of testing on 136 vehicles across the country. The BS6 conversion of Mahindra’s engine fleet (both petrol and diesel) has also resulted in the automaker filing over 30 patents and introducing 1,482 new components across models.