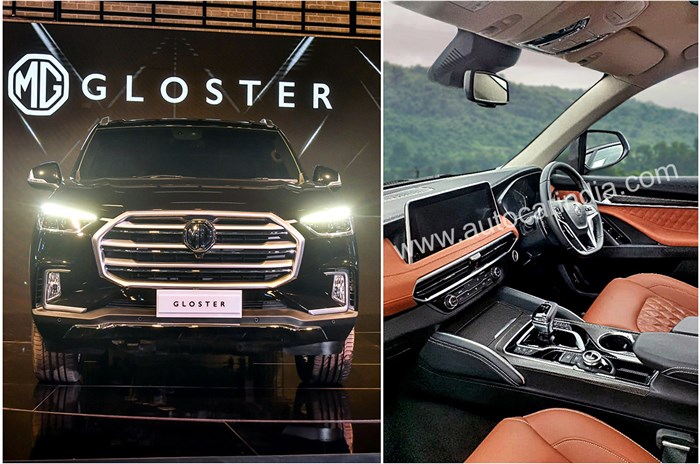 As the launch of the MG Gloster nears, sightings of this full-size SUV are becoming increasingly common. MG Motor India didn’t let anyone take a peek inside the Gloster at Auto Expo 2020, but now, a new set of spy pictures give us our best look yet at the production-spec MG Gloster’s interior.

What do spy pictures of the MG Gloster’s interior reveal?

As most know by now, the Gloster is based on the Maxus D90 sold abroad, and the new spy pictures establish the fact that on the inside, the Gloster will stay largely identical to the Maxus. There’s a dual-tone colour scheme, combining black with tan leather upholstery. The upper half of the Gloster’s dashboard also sports a tan leather finish and brushed aluminium trim, with a ‘floating’ 12.3-inch touchscreen placed above the central AC vents and manual controls for the climate control system. 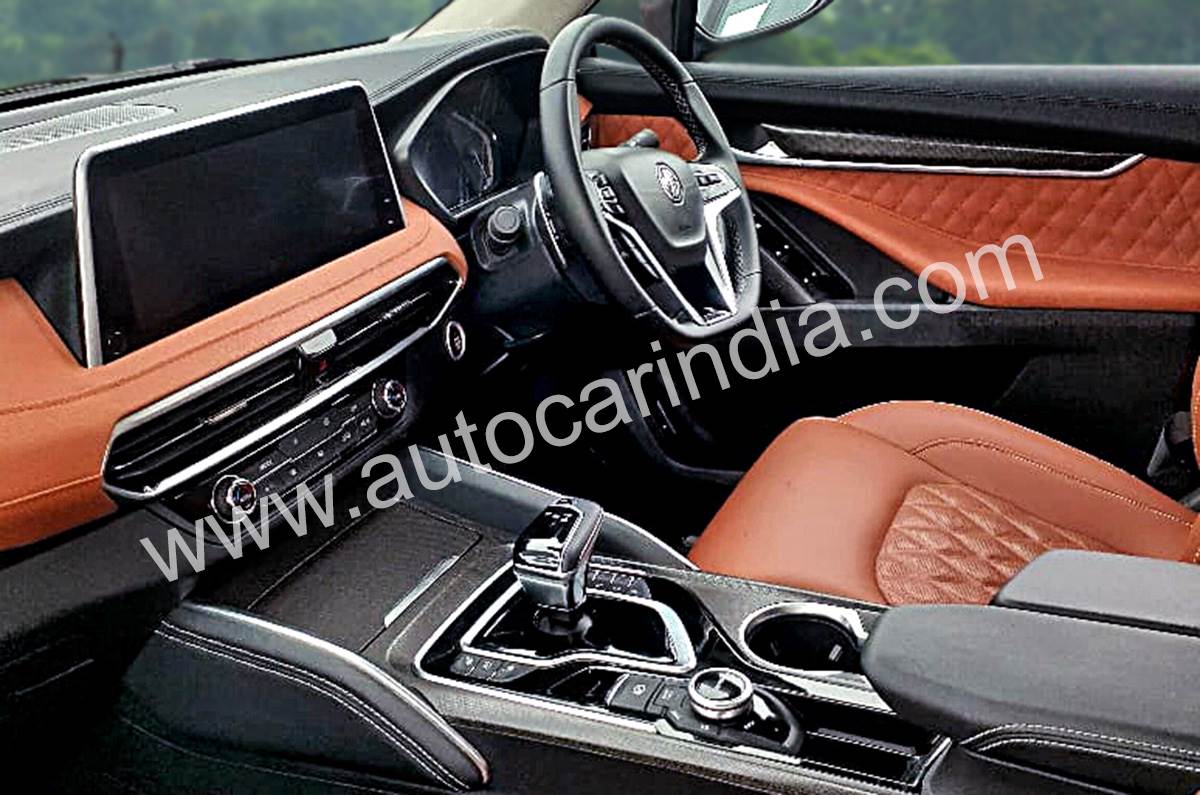 Also visible in these pictures is a large panoramic sunroof, a yacht-style gear selector (like seen on some cars and SUVs from Audi) for the automatic transmission, paddle shifters, an electronic parking brake, a full-digital instrumentsscreen and a drive mode selector. 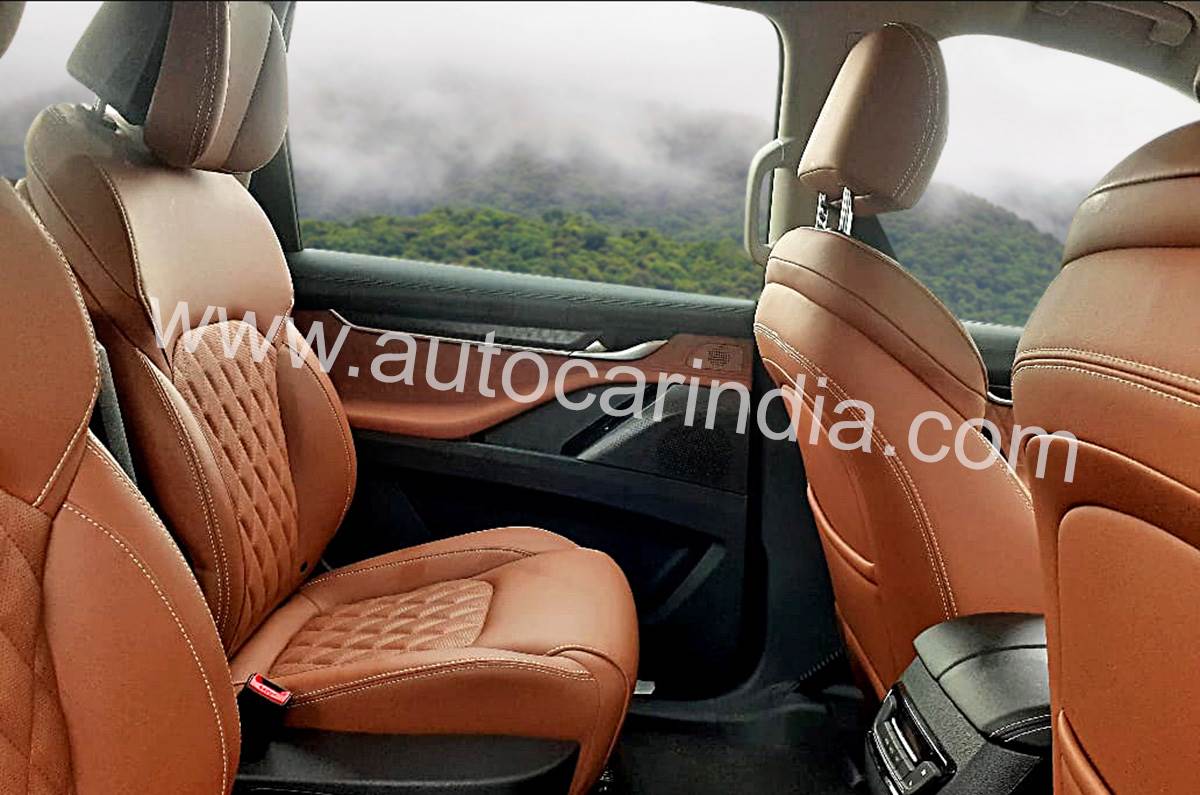 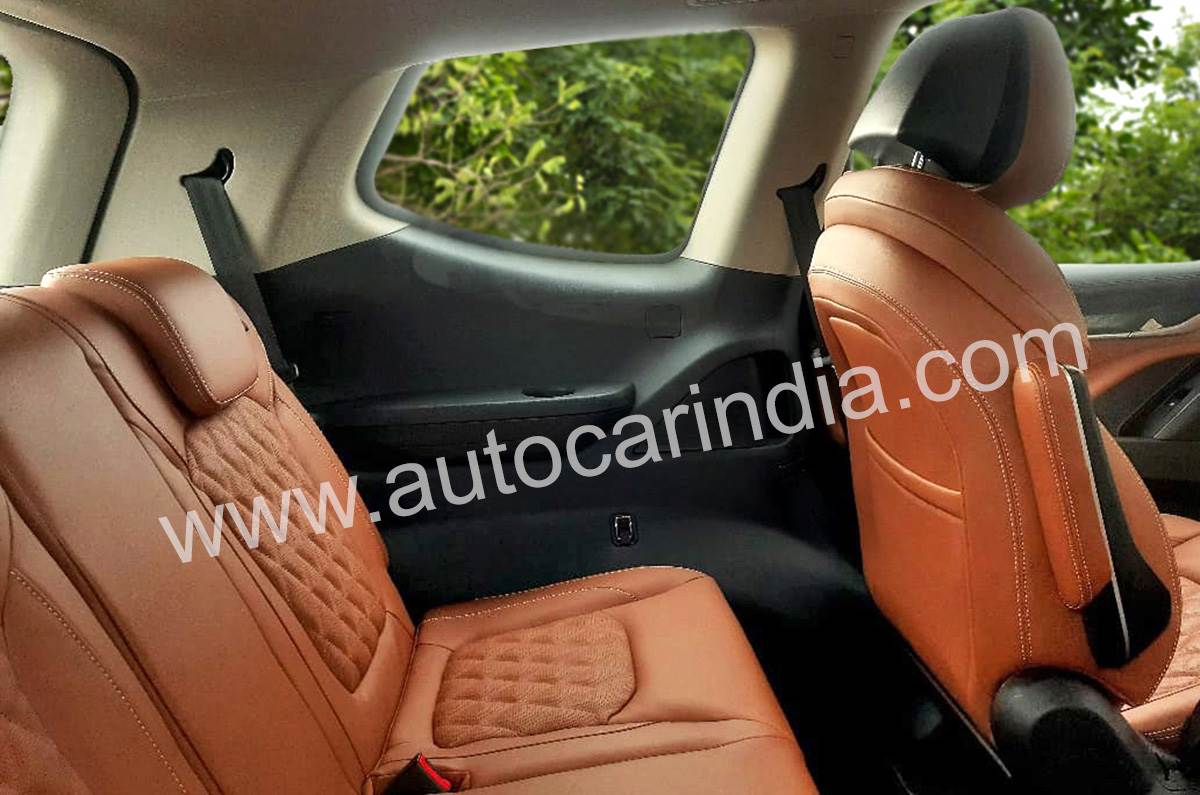 What else do we know about the MG Gloster so far?

As was revealed in new spy shots a few days ago, the MG Gloster will have on-demand four-wheel-drive, an addition that should enable the Gloster to tackle rough roads with relative ease and also compete with the likes of the Toyota Fortuner, Ford Endeavour and Mahindra Alturas G4, all of which are also available in 4x4 form. 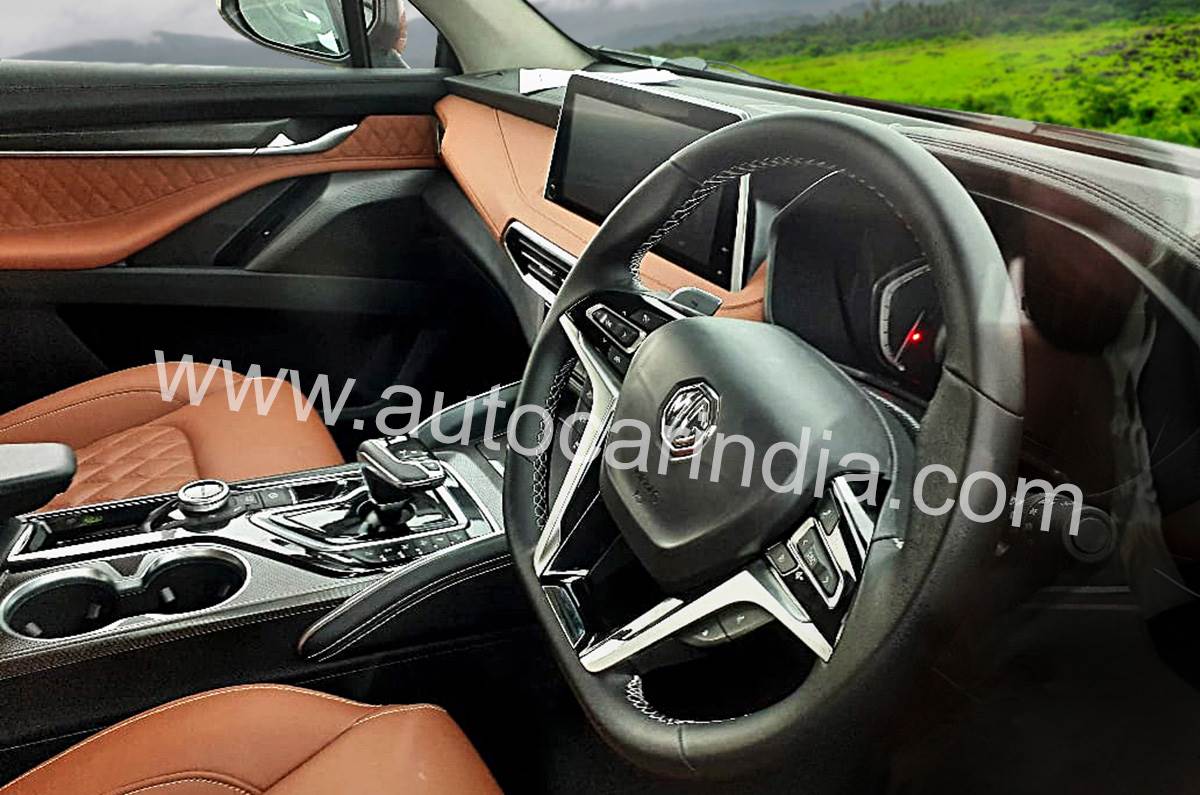 What we also know is the Gloster will come with advanced driver assistance systems (ADAS). Highlights will include adaptive cruise control – a feature found only on a handful of luxury cars in India – along with autonomous emergency braking, frontal collision warning and hands-free auto-parking. The addition of four-wheel-drive and ADAS is in line with MG’s desire to position the Gloster as a full-blown luxury SUV, and to create greater differentiation vis-à-vis other popular ladder-frame, seven-seat SUVs on sale. 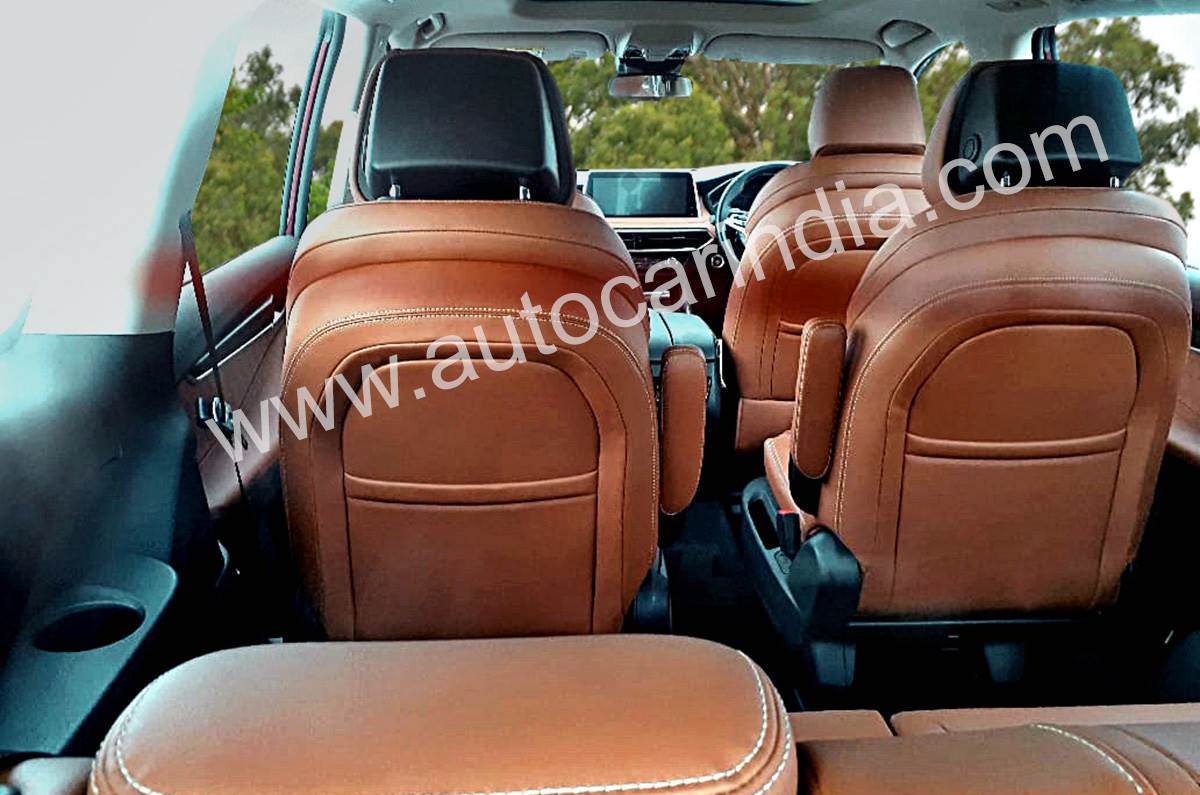 The Gloster’s length should be similar to that of the D90 (5,005mm), and with a similar width, height and wheelbase, it will be notably larger than the Fortuner, Endeavour and Alturas G4.

Abroad, the D90 is available with a 224hp, 2.0-litre turbo-petrol engine, with a choice of a 6-speed manual and a 6-speed automatic gearbox. While a petrol option is expected to be on offer, for India, the MG Gloster is also expected to get a diesel engine – a 2.0-litre, twin-turbo unit making 218hp and 480Nm of torque. Overseas, this new diesel engine is paired with an 8-speed automatic sourced from ZF.

What will the MG Gloster’sprice in India be?

The MG Gloster’s price is expected to be in the range of Rs 40-45 lakh (ex-showroom) when it is launched before Diwali this year.

What do you think of the MG Gloster’s interior? Let us know in the comments. 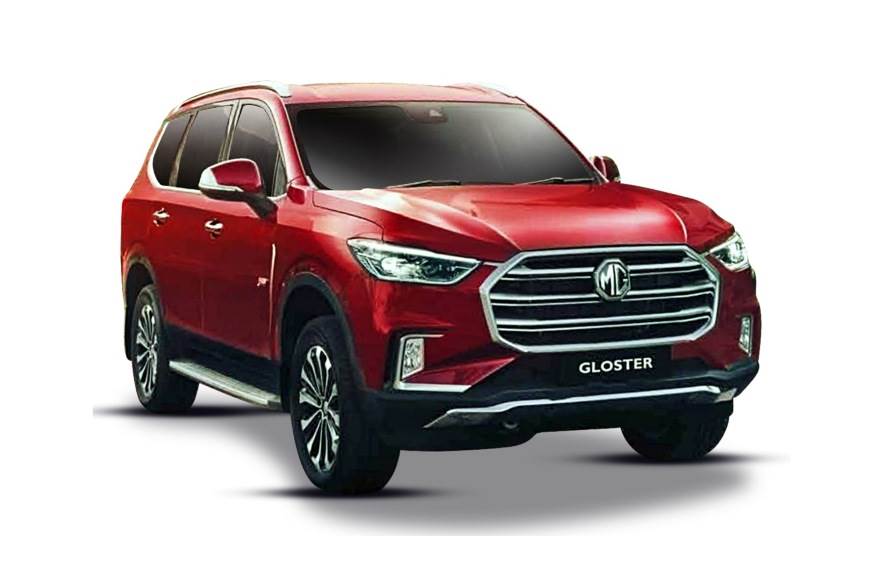