MG Gloster to have on-demand 4WD 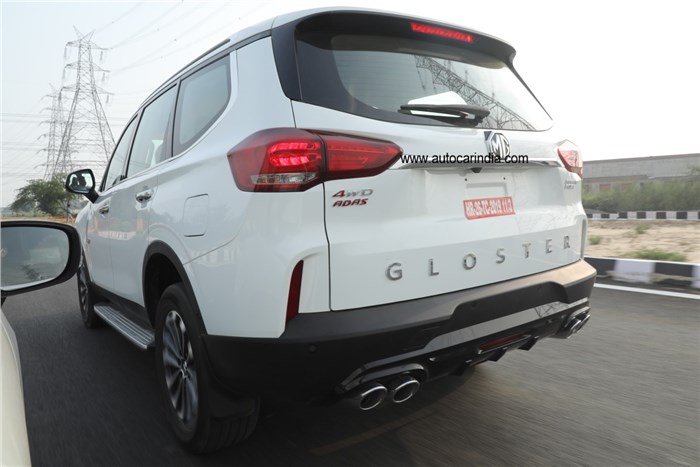 The MG Gloster, as we know from a teaser video released just last week, will come with advanced driver assistance systems (ADAS), and now, we’ve got fresh images of MG’s upcoming flagship SUV – fully undisguised in production-ready form – which confirm it will also have a four-wheel-drive system.

What do these new spy shots tell us about the MG Gloster?

Unlike the model showcased earlier this year at Auto Expo 2020, the MG Gloster seen in these pictures wears three badges at the back. One of them denotes the presence of a 4WD system, and sources tell Autocar India the Gloster will have on-demand four-wheel-drive.

Paired with plenty of ground clearance, the 4WD system should enable the Gloster to tackle rough roads with relative ease and also be able to compete on an even footing with the likes of the Toyota Fortuner, Ford Endeavour and Mahindra Alturas G4, all of which are also available in 4x4 form.

The second badge reads ‘ADAS’, a clear sign of the advanced driver assists the Gloster will pack. Highlights will include adaptive cruise control – a feature found only on a handful of luxury cars in India – along with autonomous emergency braking, frontal collision warning and hands-free auto-parking. 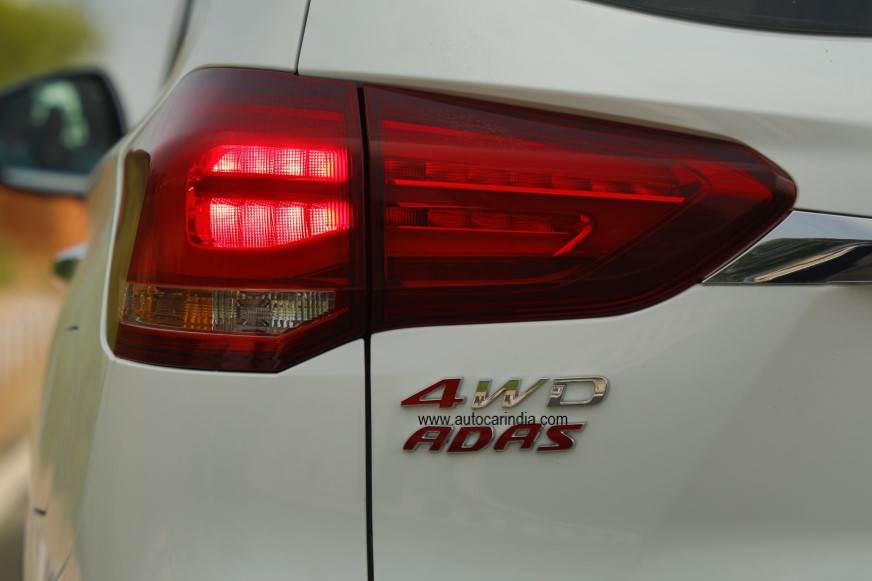 The third and final badge is one that we’ve already seen on the Hector, Hector Plus and ZS EV – ‘Internet Inside’, to denote the Gloster’s connected car features. What’s also different about the MG Gloster seen here compared to the model shown at the Expo is a tweaked rear bumper with quad exhaust tips and a faux rear diffuser. That said, it wears the same 19-inch multi-spoke alloy wheels as the show car, and has chrome door handles, a chunky chrome bar linking the LED tail-lights, and ‘Gloster’ lettering in bold at the base of the tailgate.

What else should I know about the MG Gloster?

The presence of four-wheel-drive and ADAS is in line with MG’s desire to position the Gloster as a full-blown luxury SUV, and to create greater differentiation vis-à-vis other popular ladder-frame, seven-seat SUVs on sale.

A full-size, three-row SUV, the MG Gloster is a rebadged version of the Maxus D90 SUV available overseas. The SUV’s length should be similar to that of the D90 (5,005mm), and with a similar width, height and wheelbase, the Gloster will be notably larger than the Fortuner, Endeavour and Alturas G4.

Some of the features expected on the production-spec MG Gloster are adaptive LED headlights, a large panoramic sunroof, three-zone auto climate control, curtain airbags for all three rows and a 12.3-inch touchscreen infotainment system, among others.

Abroad, the D90 is available with a 224hp, 2.0-litre turbo-petrol engine, with a choice of a 6-speed manual and a 6-speed automatic gearbox. While a petrol option is expected to be on offer, for India, the MG Gloster is also expected to get a diesel engine – a 2.0-litre, twin-turbo unit making 218hp and 480Nm of torque.

Overseas, this new diesel engine is paired with an eight-speed automatic sourced from ZF. Also part of the D90 sold abroad are drive modes, including Rock, Sand and Snow modes for off-road use, and the Gloster, too, could have these modes.

What will the MG Gloster’s price in India be?

Taking into account the sheer volume of features it’ll have – including four-wheel-drive and the advanced driver assistance systems – the MG Gloster’s price is expected to be in the range of Rs 40-45 lakh (ex-showroom) when it is launched before Diwali this year.

Think the presence of four-wheel-drive and ADAS will heighten the MG Gloster’s appeal? Let us know in the comments.