Once launched, the Sonet will compete in the compact SUV segment, against the Maruti Suzuki Vitara Brezza, Hyundai Venue, and more. 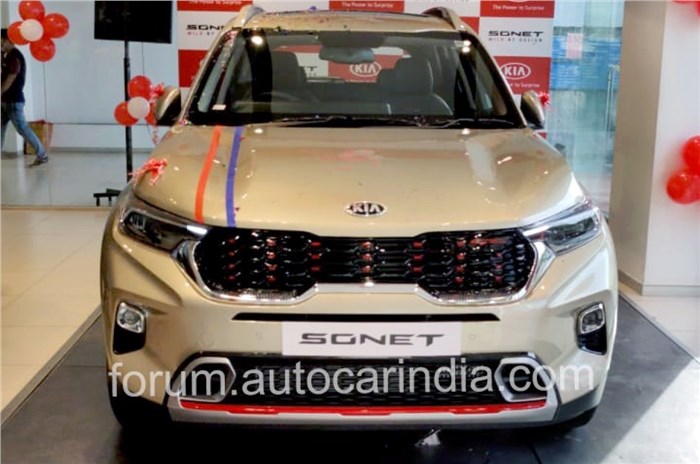 The Kia Sonet is all set to be launched in India this month – on September 18. We recently also got our hands on the Kia Sonet’s technical specifications, which showed some differences compared to its cousin – the Hyundai Venue.

What engines and gearboxes will the Kia Sonet have at launch?

Kia will offer the Sonet with both petrol and diesel engine options. The petrol options will include an 83hp, 1.2-litre naturally aspirated unit paired with a 5-speed manual gearbox. There will also be a 120hp, 1.0-litre turbo-petrol engine offered with a 6-speed iMT gearbox (a clutch-less manual) and a 7-speed DCT automatic.

What features will the Kia Sonet be offered with?

As we have seen with Kia’s previous offerings, the carmaker doesn’t skimp on equipment, and the Sonet will be no different. In its top-spec trim-level, it will get leatherette upholstery, ambient lighting, ventilated front seats, a sunroof, front parking sensors, cruise control, a 10.25-inch touchscreen with Apple CarPlay and Android Auto, the brand’s ‘UVO’ connected car tech, an air purifier, a Bose audio system and much more.

What trims will the Kia Sonet be launched with?

At launch, Kia will offer the compact SUV in two ‘model lines’, namely Tech Line and GT Line, which will consist of a total of six trim levels. The Tech Line will include the HTE, HTK, HTK+, HTX and HTX+ trims. While the GT Line will comprise of a single, fully-loaded GTX+ trim level.

What will the Kia Sonet rival?

Kia’s Sonet will enter the extremely competitive segment of compact SUVs. This means it will have to take on the likes of the Hyundai Venue, Tata Nexon, Mahindra XUV300, Ford EcoSport and Maruti Suzuki Vitara Brezza. The list of rivals will only increase as new models enter the segment, like the Toyota Urban Cruiser set to launch in the coming weeks. The Nissan Magnite and Renault Kiger are also expected to enter the segment by next year.