Sonet’s 1.5 diesel to be available in two states of tune, depending on gearbox; turbo-petrol to get iMT clutchless manual gearbox as standard. 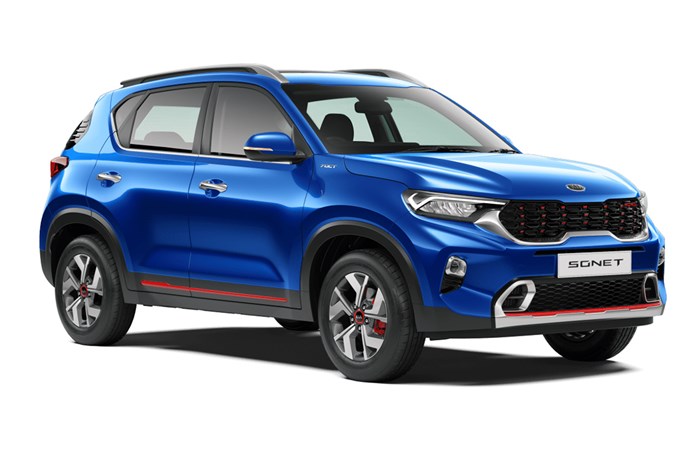 The Kia Sonet recently made its debut in production form with the launch coming up next month. A cousin to the Hyundai Venue, the Sonet shares the same engines as its Hyundai cousin, but with a few differences. Read on to know more about the SUV’s variants, engines and equipment.

How big is the Kia Sonet?

Starting with the dimensions, the Sonet shares its underpinnings with the Hyundai Venue, so while some dimensions are unchanged, there are a few differences, owing to the SUV’s design. At 3,995mm long, it is identical in length to the Venue, with the same 2,500mm wheelbase. The Sonet, though, is wider and taller than its cousin, at 1,790mm and 1,647mm respectively.

Moving to the wheels and tyres, the base variant of the Sonet features 15-inch steel wheels wrapped in 196/65 tyres. The remainder of the line-up wears larger, 16-inch wheels with 215/60 tyres.

How many petrol engines does the Kia Sonet get?

Again, as with its cousin the Venue, the Sonet will get the option two petrol engines – a naturally aspirated 1.2-litre and a more powerful 1.0-litre turbo-petrol with direct injection. The 1.2-litre unit is good for 83hp and 115Nm of torque and is available only in the low and mid variants (HTE, HTK and HTK+). The 1.0-litre, turbo-petrol in comparison puts out a much stronger 120hp and 172Nm of torque.

It’s when you move to the Kia Sonet’s gearboxes that things get a bit interesting. The 1.2-litre petrol is available solely with a 5-speed manual – the same as the Venue. The 1.0 turbo-petrol, on the other hand, foregoes the manual entirely and is available with a 7-speed dual-clutch automatic and a 6-speed iMT. For a brief recap, the iMT is essentially a manual gearbox, but without a clutch pedal. The technology debuted on the Venue a few weeks ago.

What diesel engines does the Kia Sonet get?

Moving to the diesel, the Sonet too makes use of the new 1.5-litre diesel engine that is in use in models such as the Hyundai Venue, Creta, Verna and Elantra, and the Kia Seltos. What’s unique to this segment is the option of a 6-speed torque-converter automatic gearbox – most of its rivals either lack an automatic gearbox option or use an AMT. A 6-speed manual is standard.

What does the variant-line-up of the Sonet look like?

Moving to the variant line-up, the Sonet will be available six trim levels – five in the standard Tech Line spec, and one with the sporty GT Line cosmetic pack. The Tech Line variants on offer will be the entry level HTE, HTK, HTK+, HTX and HTX+ while the GT Line will be available solely in fully-loaded GTX+.

Here is a look at what engines and gearboxes will be available in each trim level:

What features will you get in each variant?

The HTK will get you additional kit such as 16-inch wheels, driver seat height adjust, remote locking, rear power windows and a 2-DIN audio system. The HTK+ will add in tech such as auto headlamps (automatic variants only), auto climate control, power-folding wing mirrors and an 8.0-inch touchscreen with Apple CarPlay and Android Auto. The dual-clutch auto-equipped variants additionally get more safety tech, such as ESC, hill start assist, traction control and drive modes.

The HTX will add in auto LED headlamps, LED DRLs, a sunroof, keyless entry and go, cruise control, remote engine start via the car’s key, and a rear-view camera.

Moving to the GTX+, the variant will feature sportier looks and an all-black cabin, and in addition to the HTX+, equipment such as six airbags, front parking sensors, ESC, hill start assist, a wireless phone charger and more.

The Kia Sonet will rival the Hyundai Venue, Tata Nexon, Mahindra XUV300, Ford EcoSport and Maruti Vitara Brezza in the hotly contested compact SUV segment. In the coming weeks, the segment is set to expand with the launch of the new Vitara Brezza-based Toyota Urban Cruiser. Also on the cards is the Nissan Magnite and its sister model, the Renault Kiger, both of which are likely to arrive by next year.