With its stunning looks, generous equipment list, and plenty of engine and gearbox options, Kia’s Sonet looks set to carry on the company’s winning streak. 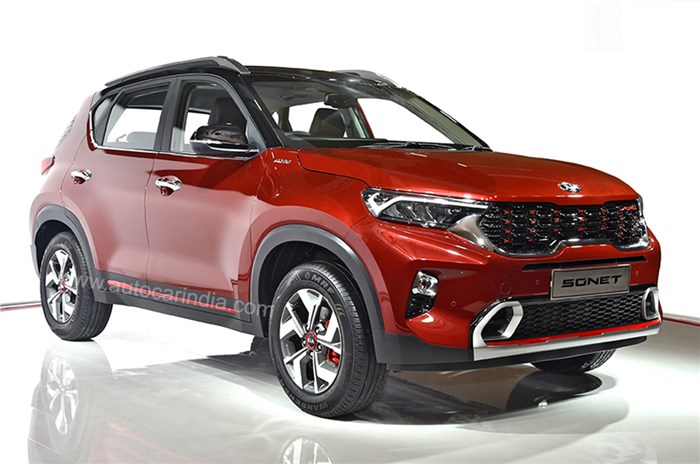 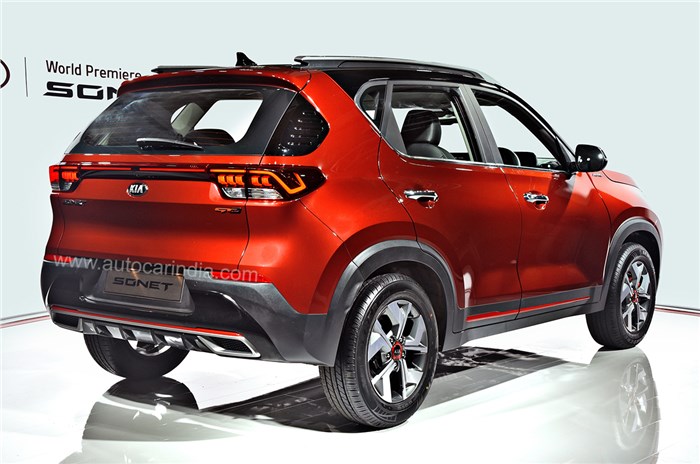 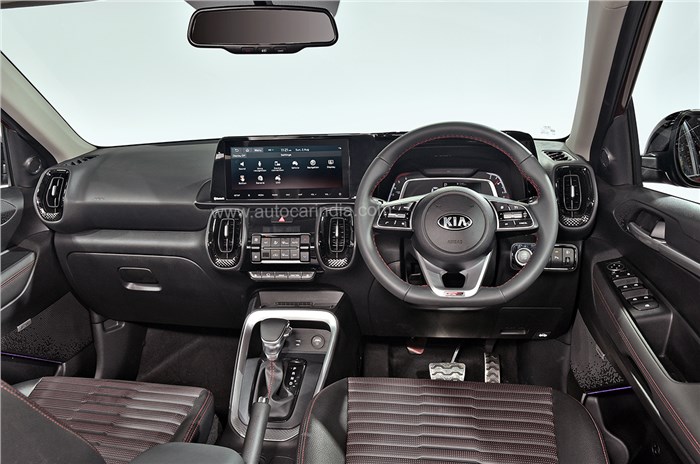 Largest touchscreen: It’s not just phones that are getting larger, car screens are getting bigger, too, and at 10.25 inches, the Sonet will have the largest screen on offer in the segment. 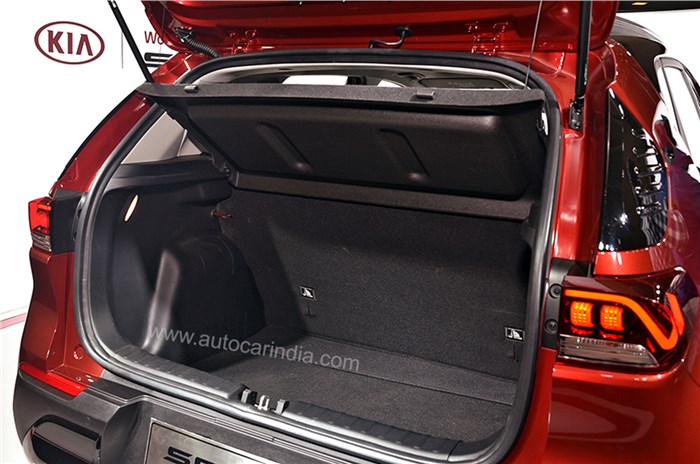 Boot space is generous and should be around the Venue’s 350L mark.

Riding on the success of the Seltos SUV, Kia India is driving into the compact SUV segment with its third offering, the Sonet. The company is quite bullish about the Sonet’s success and, in fact, upwardly revised its sales target from 70,000 units in the first year to 1,00,000. Having had a detailed look at the Sonet, here’s how we think it stacks up.

While this is the world premiere and our first detailed look at the production-spec Sonet, we’ve already had a very good idea of what to expect with the exteriors. At the Auto Expo this year, Kia unveiled what it called a concept. However, in keeping with the trend these days, rather than unveil a wild, ‘first sketch’-like car, Kia showcased an almost-production-ready version, and even the uninitiated would know that there was little that would not make it into production. And that’s been pretty much the case – the production version trades the concept’s recessed handles for regular pull-type ones, it has larger, more rounded outside mirrors, and it has a few trim and deco differences. The rest is pretty much the same.

At the front is the Kia signature Tiger Nose grille, with a knurled and chrome-finished lower edge, and multi-segmented 3D inserts, with the GT Line variant getting red highlights. Flanking the grille are slim LED headlamps, accentuated by the signature ‘heartbeat’ DRLs. The sharply cut bumper houses fog lights in what were intakes on the concept, and the large air intake area below has a hexagonal mesh and an aggressive silver-finished garnish. Topping off the front is the bonnet, with a muscular-looking power bulge. 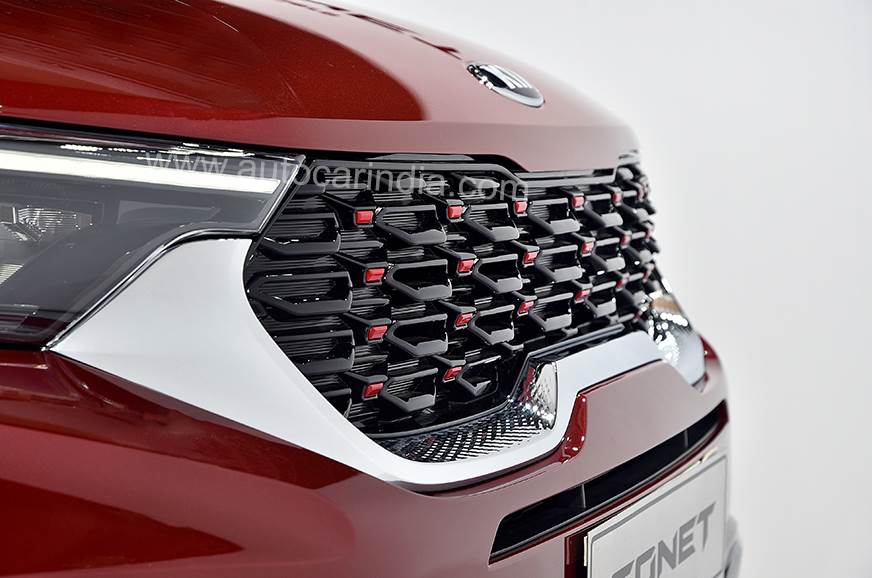 Seltos like knurled and chromed finish looks great.
Unlike the front, the sides are simpler, with more curvaceous doors devoid of any sharp design flourishes. Another interesting element retained from the concept is the blacked-out treatment applied to the top and lower edge of the C pillar, and the inset quarter glass that makes the pillar look nice and sharply swept back. The 16-inch alloys, too, are very similar to the concept’s. 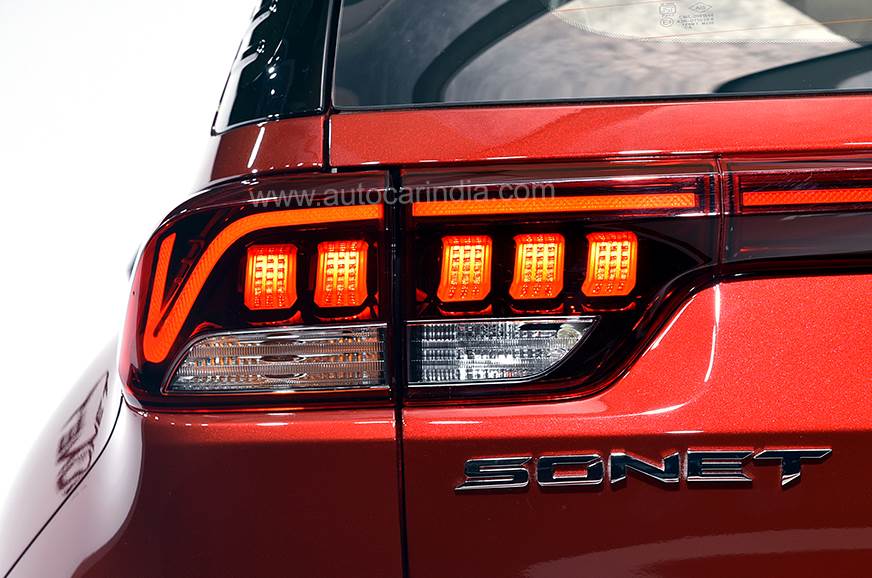 Headlight and taillights are both LED units and get the heartbeat signature.
At the rear, the LED tail-lamps also feature the ‘heartbeat’ signature, and are connected by a reflector strip, lending them a continuous, single-element look. The bumper has a silver-finish faux skid plate and faux twin exhaust trims.

On the whole, the Sonet has a lot going for it visually. While it is based on the Hyundai Venue, it borrows virtually none of the exterior panels, not even the doors. The Sonet, overall, has a less-radical look, but it’s still very striking, with lots of cuts, curves and design bits, and the good thing for Kia is they all work, rather than coming off as too garish and mismatched. So, while looks are subjective, it’s likely more would find the Kia visually appealing.

On the inside too, the siblings share very little – the dashboard, steering wheel, door pads and seats have their own unique style. Plastic quality is good, especially at the top; the lower half has some hard bits around, but on the whole, perceived interior quality is top notch. 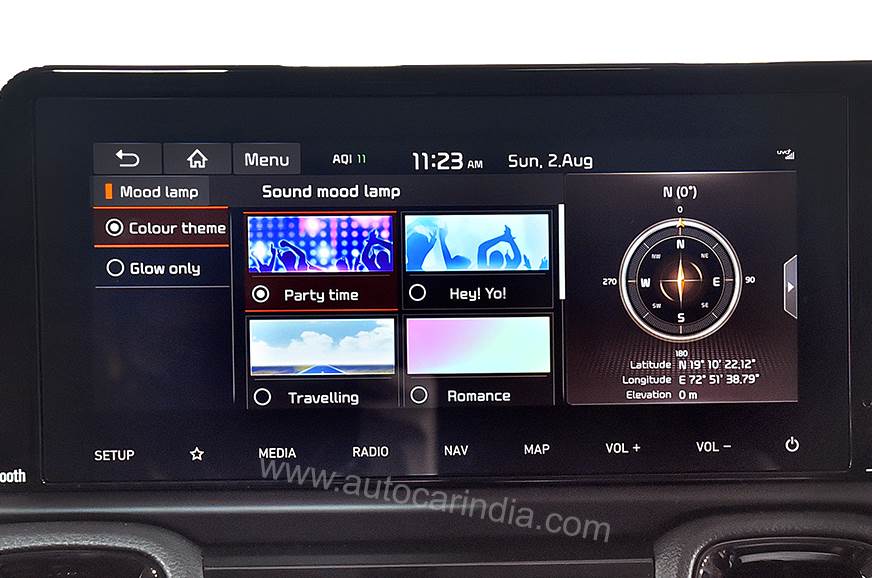 Sound mood lamps: Just like in the Seltos, the interiors can light- up to the beat of the music, or reflect and complement your mood. This is more of a party trick, so thankfully, it can be turned off.
Kia has not shared detailed specs or features, but it does look it has had the advantage of following Hyundai. Kia has matched the Venue on equipment and then added on some more too like, for example, a 7-speaker Bose sound system and ventilated front seats for both driver and front passenger. 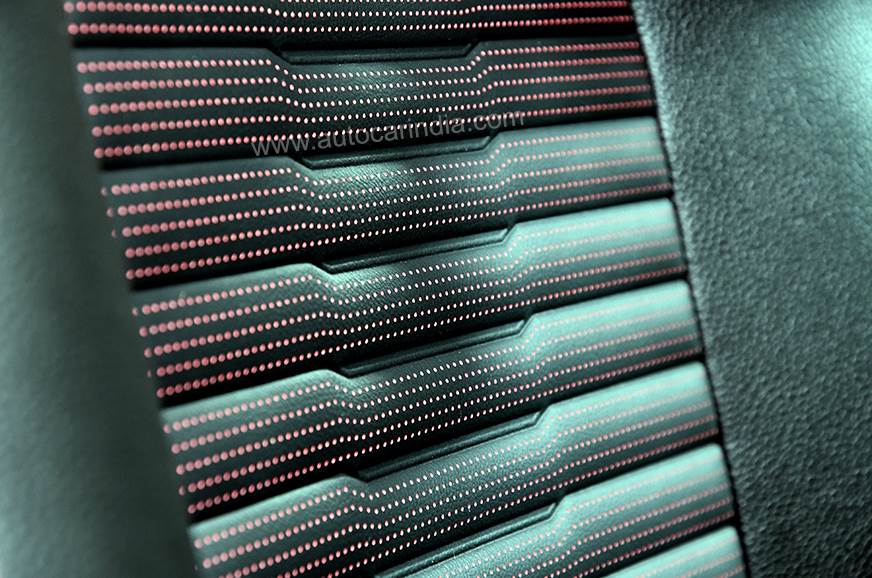 Ventilated Seats: Both driver and front-passenger seats are ventilated and have an in-built blower with three speed settings.

he highlight, though, is definitely the massive, 10.25-inch touchscreen, which has the usual set of features, and also comes with in-built navigation, Kia’s Uvo connectivity suite, and controls for the ‘sound mood lights’ a la the Seltos, and the perfumed air purifier that the company says offers virus protection. Other prominent features include auto climate control, a sunroof, auto headlamps, a tyre-pressure monitor, cooled wireless phone charging, front and rear parking sensors and safety equipment like 6 airbags, ABS with EBD, ESC, hill assist control (HAC), vehicle stability management (VSM) and brake assist. 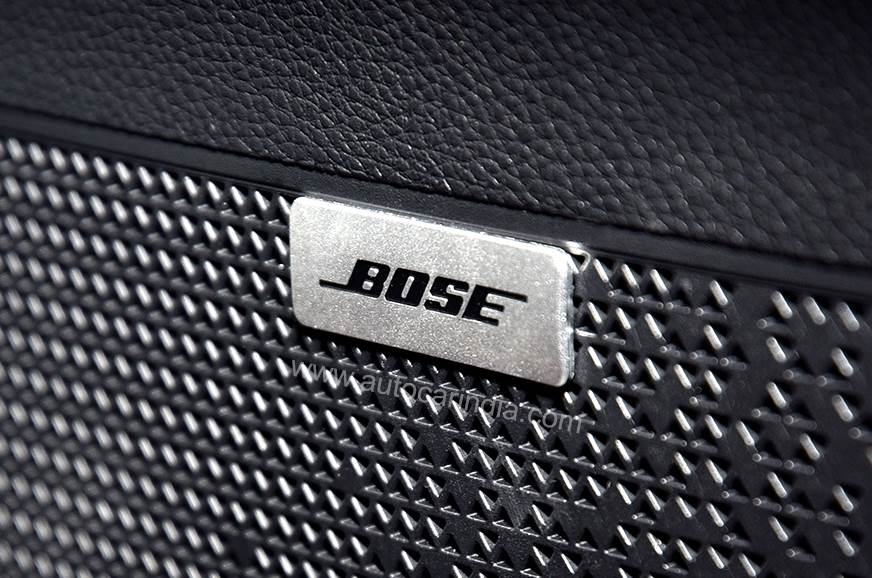 Bose sound system: Premium sound systems aren’t very common in this segment, but the Sonet offers a 7-speaker Bose system that’s certainly one of the better ones around, if not the best.

As for interior comfort, there isn’t much we can tell you at this point; the seats seem nice enough, but we’ll reserve final judgment for after a drive. As expected, interior space is similar to the Venue, which means it isn’t very large, especially at the rear; it certainly is not in the league of the XUV300, for instance. The boot, however, is pretty large and should also be at around the Venue’s 350-litre mark. 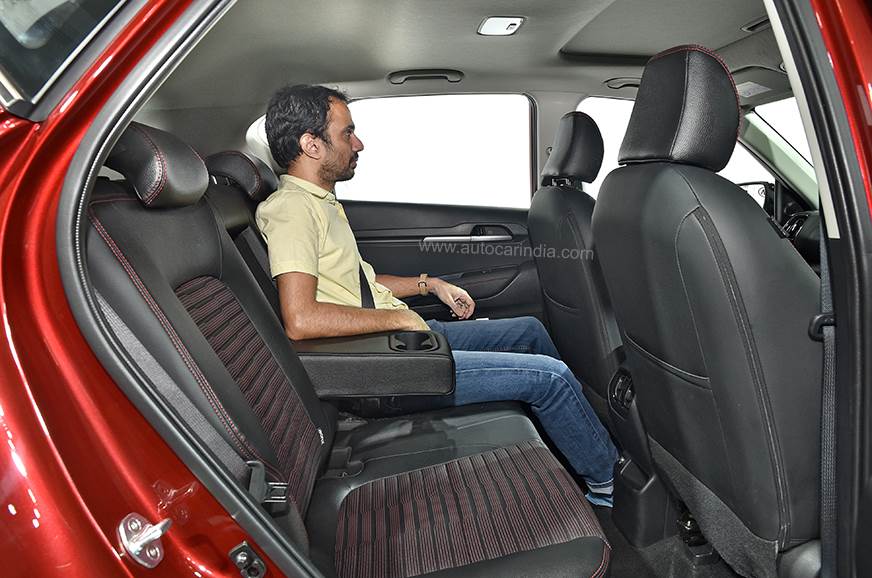 Rear space is comfortable enough but not class-leading.

Sitting behind the wheel feels pretty neat, with the instrument panel, screen and centre console all gently wrapping around you. The flat-bottom steering wheel feels nice and chunky in your hands and the controls have a quality feel too. Unlike the Venue, which gets neat twin dials, the Sonet comes with a digital speed readout, flanked by a small multi info screen. Thankfully, though, there is a small, analogue rev needle that goes the right way around – clockwise. 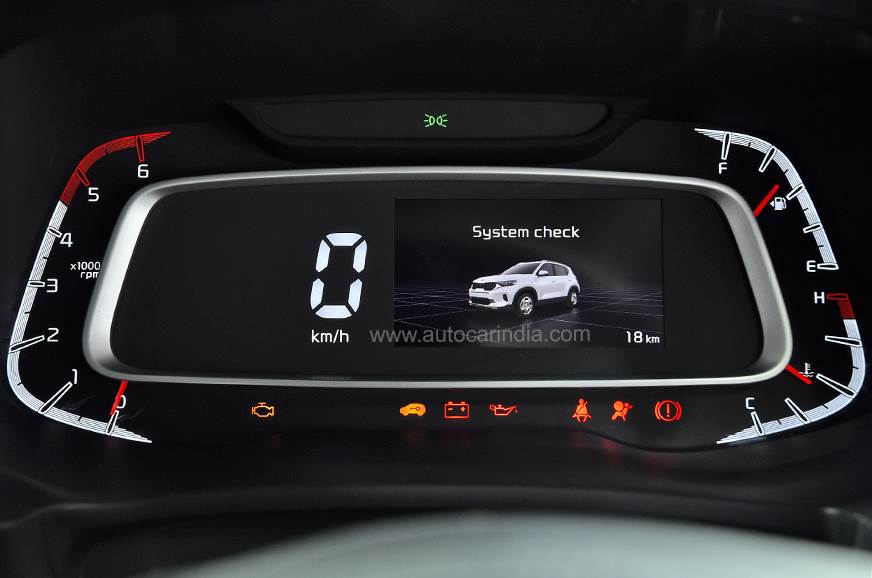 Tacho gets a needle; screen displays trip and other info.

The Sonet also offers drive modes and traction modes in the automatic version, though the details of this are yet to be announced. One bit not limited to the automatics is remote engine start and AC pre cooling; both manual and automatic cars will offer it. 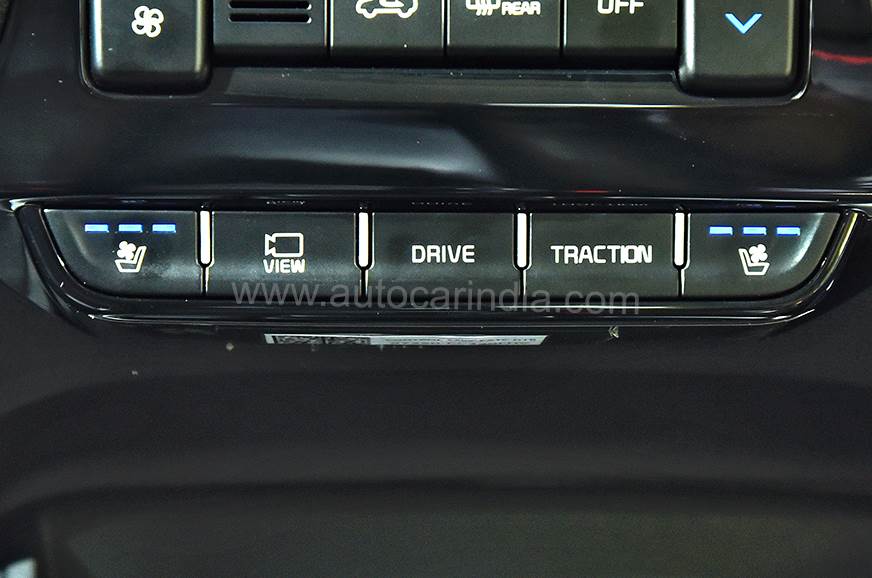 Speaking of which, while Kia has not yet confirmed tech specs or powertrain options, the company did say that, unlike the Venue, the Sonet will offer a diesel-auto powertrain. And if you thought the four gearboxes on offer in the Venue was spoiling you for choice, the Sonet will go even further; it’s likely to have as many as five options – a five-speed manual, a six-speed manual, a clutchless manual (or iMT), a torque-convertor auto as well as a dual-clutch auto. Engine options will be the same as in the Venue, with the 1.2 petrol, 1.0 direct-injection turbo-petrol and the 1.5 turbo-diesel all doing duty under the hood of the Sonet.

Thus, as things stand, the Sonet looks well suited-up for battle in the hot compact SUV space. It’s a smasher to look at, it’s got plenty of kit, and will offer a wide choice of powertrain options too. We’ll have to see how it drives and how much will Kia ask for it. Given the brand’s success so far, they could get a bit ambitious on pricing, but then again, with so much competition and a lot of sibling rivalry too, Kia probably isn’t going to leave any loose ends, so expect a competitive price and a tight battle ahead.