The brand is looking ahead to a new era with the Emira sportscar, the Evija electric hypercar and the forthcoming Type 132 SUV. 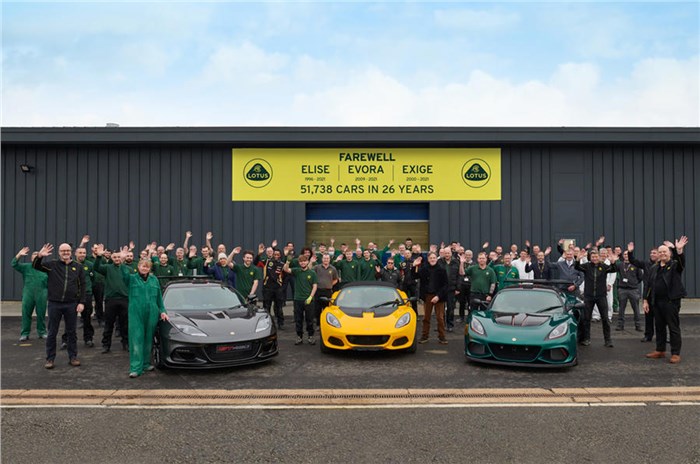 The Lotus Elise, Exige and Evora, the three sportscars that defined the Lotus brand over the past two decades have now come to the end of their lifecycle. The final Elise, Exige and Evora were recently rolled off the production line, ahead of the launch of the new Emira-led era. Combined, Lotus has produced 51,738 units of the three models, which amounts to nearly half of the firm’s total production over its 73-year history.

Lotus boss Matt Windle paid tribute to the team that has worked on the three cars, noting that they would transfer their expertise to producing the Emira and Evija. He said, "I would also like to convey enormous gratitude to all the customers of the Elise, Exige and Evora over the last 26 years for their passion, enthusiasm and support.”

Windle added, “These customers have given our ‘three Es’ true cult status – usually reserved for long-out-of-production classics. As we say farewell to the last few cars, we look forward to the Emira and Evija in the all-new factories at Hethel and sub-assembly facilities in Norwich, and the hugely exciting next chapter in our Vision80 strategy.”

The Elise, first produced in 1996, has gained a Sport 240 Final Edition in yellow which is the final model out of 35,124 cars produced. The last Exige is a Cup 430 Final Edition in heritage racing green and is the 10,497th example to come out of Hethel. The model launched back in 2000.

The two models are based on Lotus’ small car platform that was also used to produce the Vauxhall VX220 and the original Tesla Roadster. Around 7,200 VX220s and 2,515 Roadsters were produced alongside the Lotus 340R, Europa, 2-Eleven and 3-Eleven cars, for 56,618 cars produced on the platform.

The larger Evora was first introduced in 2009. Its final model is painted in dark metallic grey and represents the 6,117th Evora out of the firm’s Norwich factory. “Together with the Lotus design team, I have lived and breathed these cars for over 26 years,” said Russell Carr, Lotus’ design director.

The final version of each car will be kept in Lotus’ heritage collection.

What lies ahead for Lotus?

The new Emira will go into production in spring 2022. It will be the final pure-combustion-engined Lotus, and the first new series production machine since the firm was bought by Geely, and along with the Evija hypercar will mark a new era of future models.

“We will miss them, but a bit like Christmas, once it’s over, the excitement for the next one starts to build – and that’s what’s happening now at Lotus with the Evija, Emira and forthcoming Type 132. 2022 is going to be a great year as a new Lotus generation swings into action,” said Carr.

Which of these three Lotus sportscars has been your favourite? Let us know in the comments below.