Sebastian Vettel fastest in first free practice session in the Indian GP. He was more than 0.3s faster than Button and Alonso. 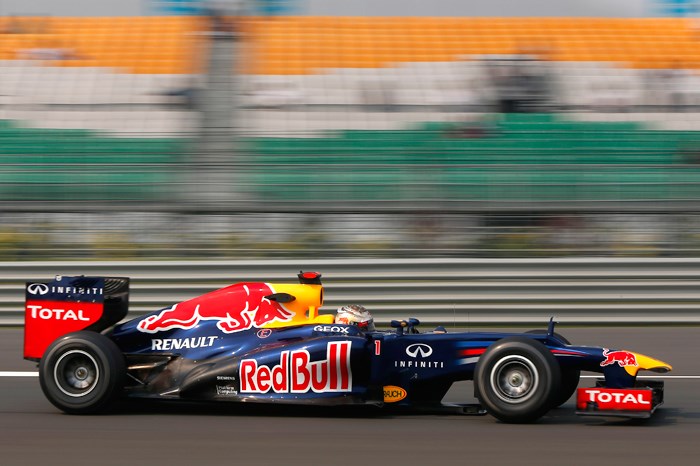 Sebastian Vettel picked up in India where he left off in Korea, as he ended up more than 0.3s faster than the opposition in the first free practice session at the Buddh International Circuit.

In an absorbing session, that for the most part promised a closely fought out weekend, Vettel's best lap, posted in the final five minutes, gave him a clear edge over Jenson Button and the German's chief championship rival Fernando Alonso.

Sickly Sergio Perez's stand-in Esteban Gutierrez was the first to set a time, just before the half-hour mark, though his 1m46.071s time was not very representative. The Sauber man wasn't the only man on track however, and quickly the two McLarens of first Hamilton, and then Button, began hammering in times in the 1m33s/32s.

The two chrome machines, and Pastor Maldonado's Williams, engaged in a game of swap the top spot for a little while as the Indian track cleaned up.

Indeed such was the rapid improvement of the circuit's adhesion that whole seconds were lopped off the standard each time one of them crossed the line. Hamilton finally ended his run on a 1m32.074s, while Button stayed out to set a 1m29.684 on the next lap - more than two seconds down the road.

Splitting the Britons by the end of this phase were Romain Grosjean and Bruno Senna's stand-in Valtteri Bottas. Rosberg emerged from the Mercedes pits near the halfway point, and his first effort put him second fastest, though his 1m30.918s was still not even within a second of Button's best. The German's second attempt was closer, but not as much as Massa's, who closed to within 0.325s of Button, the Briton all the while watching proceedings on the McLaren monitor with a cheeky smile.

Rosberg got closer still to Button, using the impressive straightline talents of the Mercedes to set one fastest first sector after another during his stint, before giving up a tenth away from the McLaren. Just as he pitted though, as if to rub it in, first his team-mate Schumacher and then Mark Webber bumped Button to third, the Australian Red Bull driver setting a new target of 1m28.963s as the RB8 ominously began to stretch its legs.

With half an hour to go, man of the moment Vettel made his first appearance in the top ten, lining up 0.288s behind Webber, while Alonso, went third moments later, though his best was nearly six tenths off the quickest Red Bull. The Spaniard matched Webber's time to the thousandth before the Australian went quicker still on a 1m28.229s. Vettel then posted a lap 0.3s away from Webber, moving back to second, now ahead of Hamilton, Alonso, Rosberg and Massa.

Into the last 20 minutes and things changed again as first Alonso rocked up on the top spot with a 1m28.210s, and then was almost instantly replaced by Hamilton, who set a 1m28.046s.

As the session entered the last ten minutes, Vettel began banging in some pacey laps. The first of those was good enough to go top, by a hundredth ahead of Hamilton, and the second would have been much faster but for a sideways moment in sector three.

Alonso, sporting aero tweaks on his Ferrari, emerged from the pits for a final throw of the dice and got within 0.08s of Vettel's best until the world champion tired of the fight and fired in a 1m27.619s - ending all arguments.

Button then moved up to second again, bumping Alonso to third ahead of Hamilton and Webber.