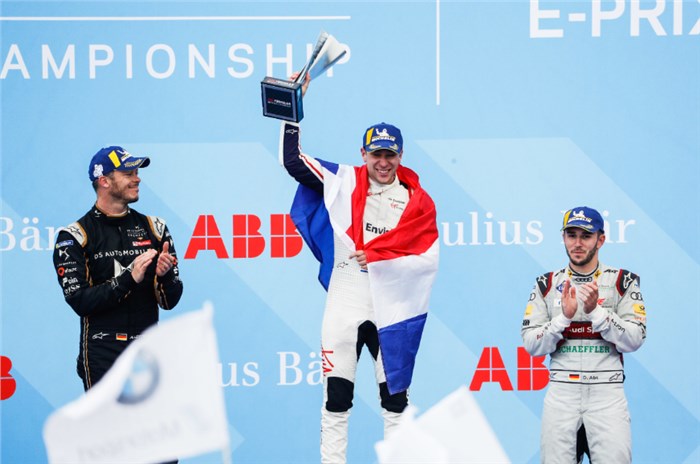 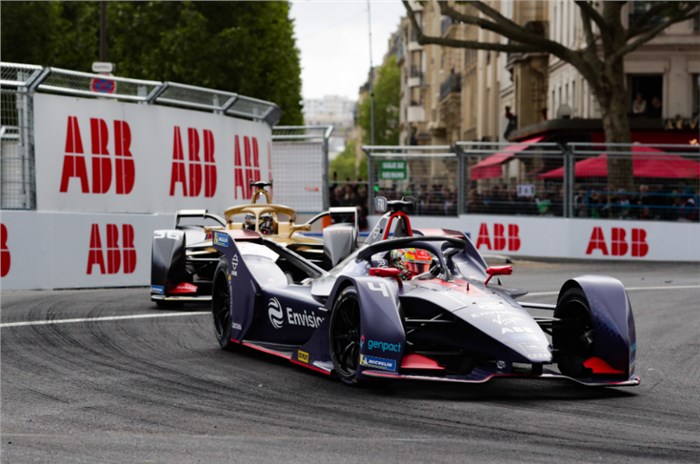 Lotterer and Abt complete the podium, while Mahindra Racing’s Wehrlein recovers to finish 10th after starting from last place.

It has shaped up to be an unpredictable 2018/19 season for Formula E and the 2019 Paris E-Prix continued the trend with Robin Frijns becoming the eighth different winner of eight races, this season. The Virgin Racing driver survived tricky wet conditions – on what marked the series’ first wet race – on the streets of Paris to clinch his very first Formula E race victory.

The Paris E-Prix served up plenty of drama before the race even started – Mahindra Racing’s Pascal Wehrlein earned pole position, while his team-mate Jérôme d’Ambrosio qualified 6th. However, both drivers were later demoted to the back of the grid due to a tyre-pressure technical infringement, handing pole position to Nissan e.dams driver Oliver Rowland, with his team-mate Sébastien Buemi right behind him. The race started behind the safety car owing to the damp track conditions and things soon started unravelling for Nissan as Rowland crashed out of the lead just a few minutes into the race after locking up at Turn 10 and hitting the barriers. Buemi was promoted to the race lead as a result, but Frijns was right on his tail. After a few attempts, Frijns slotted into the lead as Buemi slowed down heading into Turn 8 and later headed into the pits with a punctured tyre.

A Full Course Yellow was soon engaged as the rain started coming down harder, with Frijns leading the pack ahead of André Lotterer and Felipe Massa. Racing had just got underway once again with around 23min to go when Tom Dillmann was forced to retire after damaging his car. It became apparent that the drivers were struggling in the worsening conditions as Sam Bird went wide at Turn 3 and a recovering Rowland took Alex Sims out of the race at the same spot soon after. Elsewhere, Felipe Massa spun out of contention for a potential podium finish and dropped down the grid.

With just over 10min left on the clock, Edoardo Mortara made contact with Alex Lynn, bringing both their races to an end. The incident brought out the Safety Car and by the time racing resumed, there were just 2min left on the clock. By then, d’Ambrosio had made an impressive recovery and was up to 8th place after starting all the way down from 21st place. However, just moments later he hit the barriers at Turn 3 and was ultimately classified 17th.

The results of the Paris E-Prix have had some major implications on the championship. Heading into the race, d’Ambrosio was leading the drivers’ standings, but he’s now dropped down to 5th place. Meanwhile, Frijns’ race victory has propelled him to the top off the standings with 81 points, just one point ahead of Lotterer.