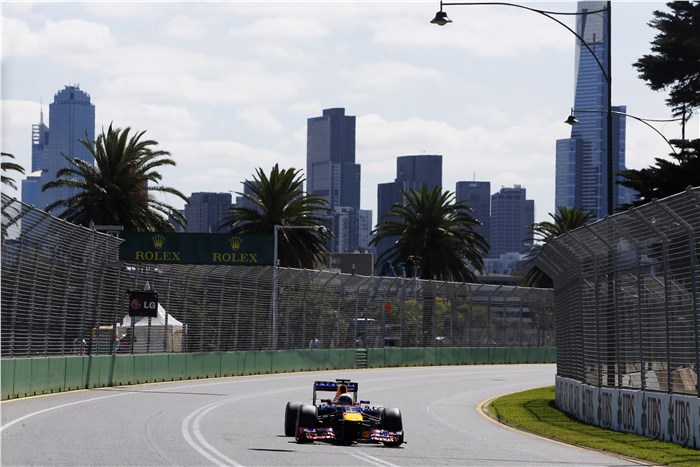 Vettel, who had also led the morning session, was quickest for the majority of the afternoon, leading by a second early on.

Webber nosed ahead briefly during the super-soft runs, before Vettel took the top spot with a 1m25.908s lap, 0.264 seconds ahead of the Australian.

The teams all switched to heavy fuel runs soon after. Tyre degradation appeared severe, with lap times on short runs dropping off dramatically after the first flying laps, and the pace on longer stints slowing considerably.

Tyre wear looked like it was a factor in a late-session spin for Webber, who lost grip on the exit of Turn 13 and slid sideways and backwards down the track.

Nico Rosberg took third fastest, before stopping on track in the closing moments with a suspected gearbox failure.

His team-mate Lewis Hamilton was seventh. A potentially better lap was interrupted with a trip over the Turn 9 gravel and grass, and he later ploughed into the gravel just minutes before Rosberg had his issue.

Also in trouble were Jean-Eric Vergne, who spun his Toro Rosso across the asphalt run-off, and Giedo van der Garde, who spun off at Turn 6 and got stuck in the gravel with an hour to go.

Lotus got both cars in the top five, with Kimi Raikkonen ahead of Romain Grosjean in fourth.