The new Innova will come with a diesel automatic variant and will be loaded with features and technology. 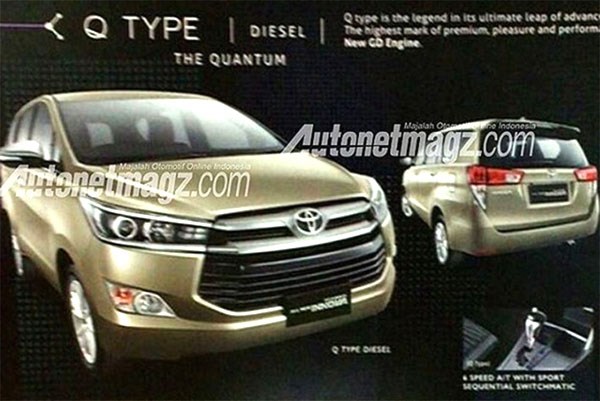 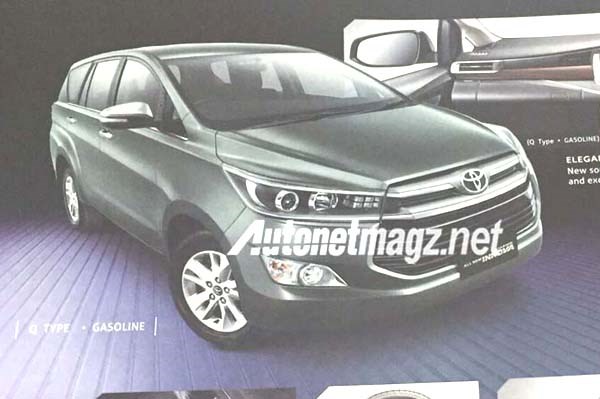 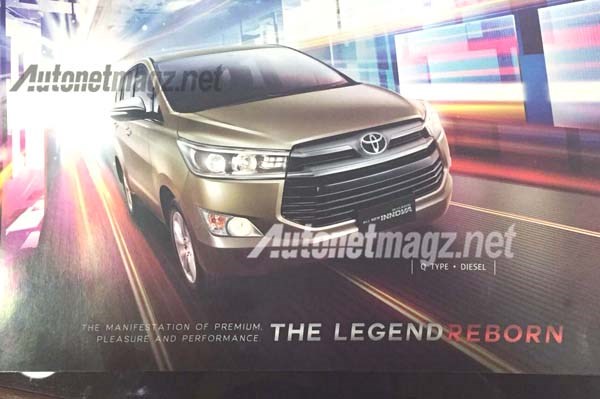 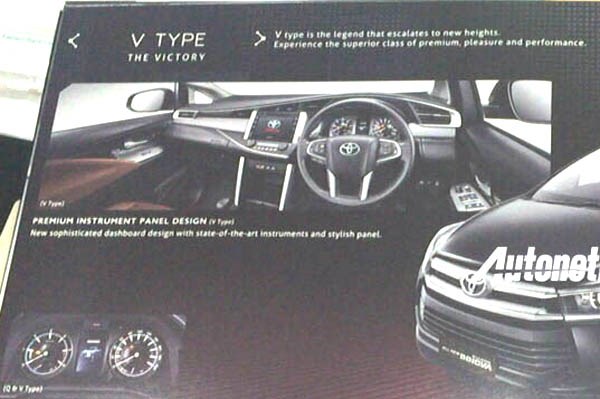 A new set of pictures of the all-new Innova have surfaced on the internet ahead of its global unveil next month. This is the second set of images that have been leaked, with the first image of this new MPV seen earlier this year. The new images are from the brochure of the Indonesian-spec new Innova.

The new MPV's styling is heavily inspired by the present-day designs of other Toyota offerings. It gets the big hexagonal grille with two thick chrome slats on the top that blend into the headlamps. The grille, as seen earlier, is wider and taller and flows all the way into the base of the front bumper. The headlamps are double-barrel projector units with Corolla Altis-like integrated LED daytime-running lamps.  The bottom half of the bumper is heavily sculpted, and the fog lamp inserts mirror the shape of the headlamps and flow into the grille. The shape of the fog lamps is like those on the Camry.

A new image showing the rear styling of the Innova has leaked on the internet as well. The new Innova ditches the vertically stacked taillamps and now comes with horizontal units and a unique turn indicator design that is pointed downwards.

As seen in the leaked brochure scans, the new Innova is likely to score high when it comes to features and engine-gearbox combinations.  The new Innova for Indonesia will be available in both petrol and diesel engine guises with a choice of five-speed manual and six-speed automatic gearboxes, even for the diesel variant. The new Innova will also feature two driving modes – Eco and Power – across all engine choices and trims. It also gets LED head and tail-lamps along with an emergency braking illumination feature. It will offer the keyless go and push-button start feature in higher variants. The top-spec trim will be equipped with a total of seven airbags, while the lower variants will benefit from dual front airbags as standard. The new Innova will also get stability control and hill-start assist standard across all trims.
The leaked images also give us a sneak peek into the new Innova's interiors. Like the all-new exteriors, the Innova doesn't disappoint in this department either. The dashboard is all new and draws heavy resemblance from the one seen in the new Fortuner. The new Innova's dashboard gets a dual-tone theme with the top half being black and the rest in beige. A thick slab of faux wood extends to either end, dividing the top and the bottom halves. The AC vents are slim, like the ones seen on the new Altis. There's an all-new 7.0-inch touchscreen infotainment system that takes centre stage, below which sit the buttons and knobs for climate control. The new Innova's infotainment system will feature Bluetooth, aux and SD card support, and voice command recognition as well. A cooled glovebox  and a telescopic steering with tilt function are likely to be offered across all variants in the Indonesian market.

The new Innova's mid-spec variant for Indonesia will get an even higher-specced infotainment system which apart from the standard functions, will feature HDMI input along with Miracast Wi-Fi support along with internet browsing facility. There will be premium interior mood lighting and an auto up/down window feature on offer as well, at least on the top trim. However it remains to be seen if these features trickle down to the India-spec Innova or not.
The new Innova will get the all-new GD series engines. The diesel motor now is a 2.4-litre unit that replaces the old KD 2.5-litre motor. This engine will be mated to a five-speed manual and a six-speed automatic gearbox. It develops 147bhp at 3,400rpm and generates 36.6kgm of torque in the range of 1,200-2,600rpm with the six-speed auto. The same engine, when coupled with the five-speed manual, develops a similar 147bhp but generates a slightly-lower 34.8kgm of torque in the range of 1,200-2,800 rpm. Internationally, the new Innova will also come with a 2.0-litre petrol engine good for 137bhp and 14kgm of torque.

The all-new Innova will surely benefit from its predecessor's bullet-proof reliability and popularity. With an all-new diesel engine along with a diesel-automatic combo and not to forget the long feature list, it has all the ingredients of another segment leader in the making. But in the end, it all boils down to the pricing. It will be a safe guess to expect a significantly higher pricing for the new Innova when it reaches Indian showrooms next year.
Source