Mahindra is looking to save costs and share technology and platforms with its Korean subsidiary which returned to profits after nine years. 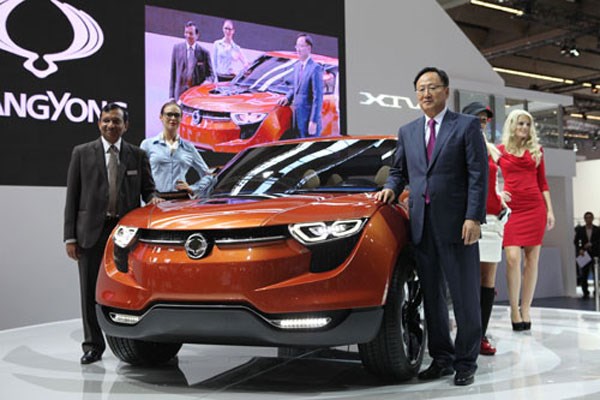 Mahindra and its South Korean subsidiary SsangYong are aggressively working on deepening their synergies. The immediate agenda is to develop a petrol engine that would find use in both brands, license SsangYong's Tivoli platform to Mahindra, jointly develop a platform and build upmarket electric cars.

The homegrown carmaker is co-developing an all-new 1.5-litre petrol engine with SsangYong which will power both the carmakers’ future range of vehicles for the local as well as export market. This is also likely to do duty in the next-generation Thar for export markets, whose development is underway. The powertrain will be identical in many aspects such as design, engineering and validation to maximise cost-sharing.

“We are currently working on a 1.5-litre petrol engine where the intellectual property rights will be shared by Mahindra and SsangYong, and will be used by both the companies for their own products. This engine is almost the same [for both], and has the same design, engineering and validation. This has given us a tremendous benefit in terms of development and material cost since we have been able to combine volumes,” Pawan Goenka, managing director, Mahindra and Mahindra said.

Extending its scope of collaboration, Mahindra has licensed SsangYong’s Tivoli platform which will underpin its new SUV, codenamed S201. However, the SUV, which is set to be introduced in late 2018, will not share any other aspect with the Tivoli apart from the platform. “It’s not like taking the Tivoli and putting a Mahindra badge on it. It’s just the platform that has been shared. The dimensions are not the same,” Goenka added.

Work is also afoot on a completely new platform which Mahindra and SsangYong are jointly developing. Both carmakers will have their own products on the platform and just like in the case of the S201, the new vehicles will have different design elements. Interestingly, apart from using its own team, Mahindra will draw expertise from SsangYong as well as Pininfarina to design the S201 and the other cars developed on the new platform.

Another aspect of its collaboration with SsangYong includes the development of a powerful electric powertrain. Mahindra Electric, the electric mobility arm of Mahindra and Mahindra, is currently working on a more powerful 380V system for larger vehicles, including SUVs and even a performance vehicle. At present, Mahindra Electric has two systems – a 48V one and a 72V – currently doing duty in its vehicles. Although nothing is final, Goenka suggested that Mahindra and SsangYong could jointly use the powerful electric powertrain for a common or an independent product.

Additionally, both carmakers are likely to collaborate on technology sharing in areas such as lightweighting, dual-clutch transmission, e-clutch and connected cars to save on costs.
The recent plans surrounding the business partnership are intended to boost both carmakers’ individual prospects. SsangYong recently reported profits for the full year of 2016, selling its highest volume in 14 years. Highest sales in the last quarter of 2016 helped the Korean carmaker return to profit after nine years.

Along with SsangYong, Mahindra also has Pininfarina, Mahindra Research Valley and Mahindra North America Technical Center (which is currently developing the U321 MPV) in its arsenal. What remains now is to string these different entities together into one cohesive unit.