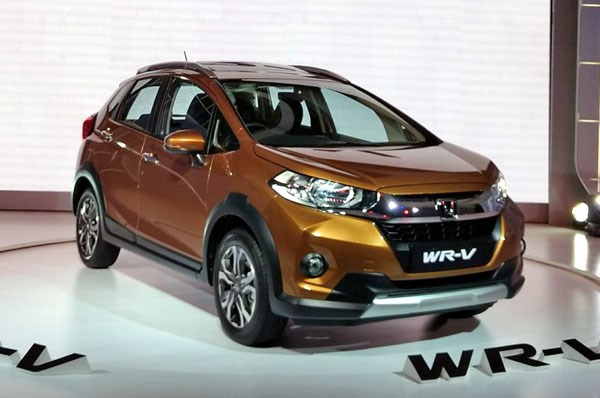 Honda has launched its new offering, the WR-V, in India with prices starting at Rs 7.75 lakh, and going up to Rs 9.99 lakh (ex-showroom, Delhi). Based on the Jazz hatchback, the WR-V is available in two variants, S and VX, with the option of a 1.2-litre petrol and 1.5-litre diesel engine.

The cross-hatch gets significant changes that make it look beefier than the Jazz. This is noticeable at the front with its raised bonnet line, thick chrome grille, a contrasting scuff plate, a sculpted bumper and new headlights with daytime running LEDs. Rear-end design too has been heavily modified with new L-shaped-tail lamps, bumper and tailgate.

A revised suspension and the larger 16-inch wheels and 195/60 profile tyres give the WR-V a ground clearance of 188mm (23mm more than Jazz). The suspension tweak has also resulted in a 25mm increase in the wheelbase.

The cabin is largely similar to the Jazz's but with a lot more chrome finishing that gives it a premium look. Honda has also added a host of features including a sunroof, the Digipad touchscreen infotainment system (first seen in the City), a front centre armrest, and a reversing camera with multiple views. What's missing though are the Jazz’s multi-folding ‘magic seats’.

Safety-wise, the WR-V gets anti-lock braking, electronic brake distribution and front dual airbags as standard across the range.

On the engine front, powertrains options include the 1.2-litre i-VTEC petrol developing 90hp and the 1.5litre i-DTEC diesel developing 100hp with Honda claiming fuel efficiency figures of 17.5kpl and 25.5kpl, respectively. The diesel gets cruise control and an engine start/stop button and is mated to a six-speed manual gearbox, while the petrol gets a five-speed manual gearbox. There is no automatic variant currently on offer.

The WR-V positions itself as a direct competitor to the Hyundai i20 Active, Toyota Etios Cross, Fiat Avventura/Urban Cross and Volkswagen’s Cross Polo. However, sales of these cross-hatches are lacklustre and with the WR-V, Honda hopes to eat into the EcoSport and Brezza sales too.