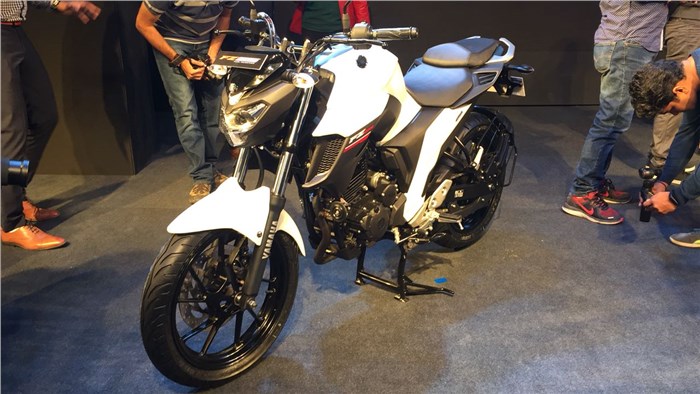 The FZ25 maintains the street fighter-like design philosophy of the current FZ series. The lines are muscular throughout, especially in the sculpted fuel tank and mid-section. The 'mid-ship' exhaust is similar to the one from the FZ16.

The principal change, of course, is the engine. The FZ25 will be powered by a 249cc single-cylinder, air-cooled, fuel-injected engine with SOHC and two valves, mated to a five-speed gearbox. The engine will produce 20.9hp at 8,000rpm and 20Nm at 6,000rpm. This engine will feature Yamaha Blue Core technology that is claimed to improve fuel efficiency – the claimed figure is 43kpl. Yamaha also states that this engine offers great acceleration, especially in the low range, though the verification of these claims will be pending until we test ride the bike for ourselves.

It is important to mention that, considering the price, the power figure seems to be lower than expected.

On the equipment front, the FZ25 gets an all-digital LCD instrument cluster (which includes a trip meter as well as a live fuel economy indicator), LED headlight and tail-light, and alloy wheels. Safety features such as ABS are conspicuously missing, with the cited reason being cost concerns. Yamaha did say that they will be added when government norms mandating the same are implemented.

Stopping power will be provided by a 282mm front disc and 220mm rear disc brakes. The suspension setup includes, as with the earlier FZ, telescopic forks up front and a monoshock round the back.