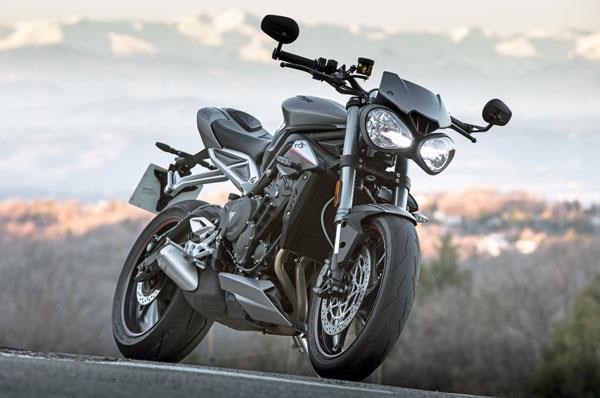 The Street Triple 765 is a highly impressive motorcycle, one that recently won our comparison review with the Kawasaki Z900. It also performed incredibly well at the 2017 Autocar Track Day, setting a lap time just 4s off a new-age litre-class sportbike. However, all of this is has been achieved by the entry spec Street Triple S model. Internationally, Triumph sells the Street Triple in three trims, but only the Street Triple S is currently available in India. That's about to change soon with the introduction of the range topping Street Triple 765 RS.

The Street Triple 765 RS not only comes with significantly more kit than the base S model but it also gets a higher state of engine tune. Where the S produces a healthy 113hp and 73Nm, the RS makes 123hp and 77Nm. Complementing the extra power is a set of range topping Brembo M50 brakes, commonly seen on high-spec, litre-class superbikes. Suspension sees a big upgrade as well, with Showa’s Big Piston forks up front and an Ohlins rear shock. Triumph is clear that the Street Triple 765 RS is as serious about track riding as road performance and proves it through the use of super-sticky, Pirelli Supercorsa tyres which are also usually reserved for the most high performance motorcycles.

Visually, the 765 RS gets a quite a few differentiators that go beyond the lovely frozen matt colour scheme. The first of these is a rear seat cowl, but the bigger upgrade comes in the rich, full colour LCD instrument screen facing the rider. The bike also offers five riding modes and multiple viewing modes for the digital display.

When we first rode the Street Triple 765 RS in Spain earlier this year (LINK) Triumph suggested that all three models would eventually make it to India. However, it now appears that Triumph will only bring in the RS as it currently doesn't see the space for the mid-spec R model. Considering all the top shelf components on offer, expect the Street Triple 765 RS to cost significantly more than the S, which retails at Rs 8.7 lakh ex-showroom Mumbai. An ex-showroom price at around the Rs 10.5-11 lakh mark is fair to expect.