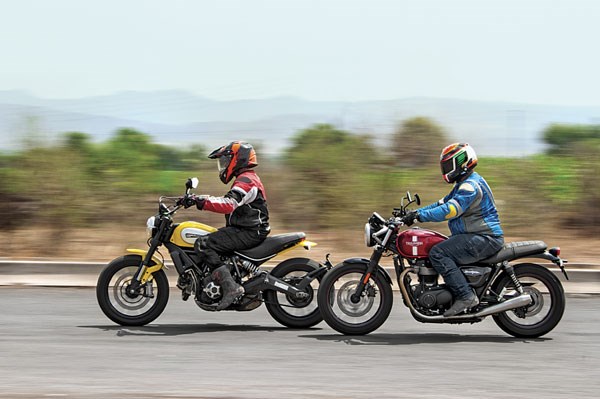 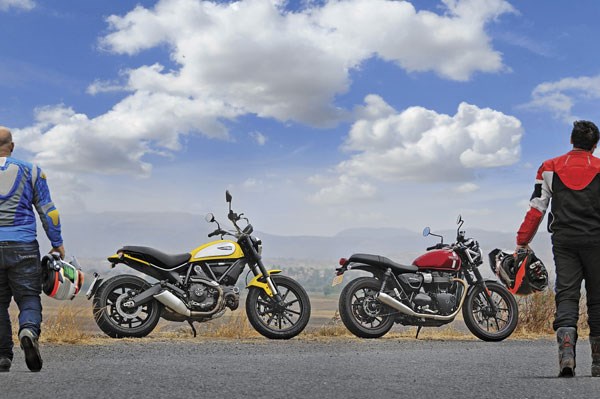 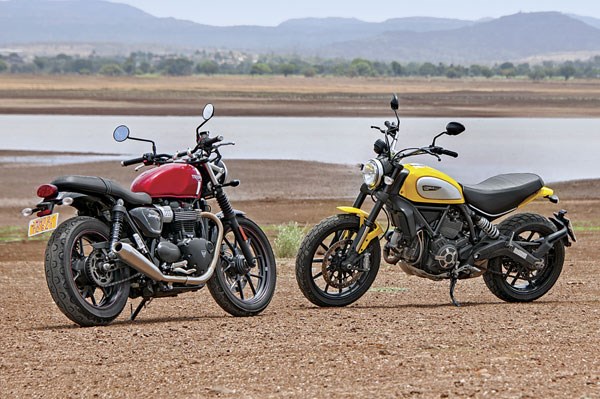 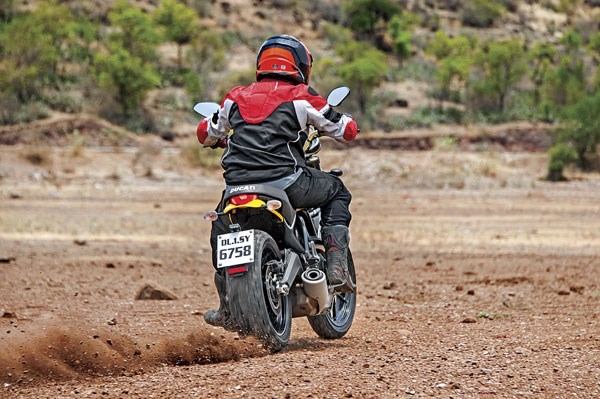 They both have classic styling along with oodles of modern tech. But which bike stands out as the one to own?

There are usually two distinct camps of motorcyclists – those who like to own the latest cutting edge, high-speed machines and those who prefer the calm and soothing process of working on and riding classic bikes from a bygone era. There is a recent trend, however, of bikers who love all that classic motorcycles represent, yet want a machine that’s thoroughly modern in construction. And in India, you needn’t look any further than the two bikes we have here, the Ducati Scrambler Icon and the Triumph Bonneville Street Twin to see just what appeals to this third lot of motorcyclists. Both motorcycles are modern interpretations of designs from the early 1960s and their sense of generic multipurpose represents a distinct move away from the highly specialised motorcycles that you see today. By virtue of their delicious designs, healthy but un-intimidating performance, modern safety aids, and accessible price tags, these motorcycles also offer bikers a friendly and properly usable stepping stone into the world of “big bikes”. And speaking of money, their near identical pricing in the Indian market makes choosing between the two a helluva task.

Both are really good-looking bikes; while the Scrambler looks ready for action, the Street Twin looks purposefully laid back.

Bringing their ‘A game’

The Street Twin’s gently evolved and clean design manages to make it look even more proportionate now. Under the skin, it’s all-new and a massive update over the last-generation Bonneville. The all-new chassis is a simple but rugged dual-cradle design nestling a brand new eight-valve, 900cc parallel-twin motor which now gets liquidcooling. Even with a lowly 55hp on tap, the boffins at Triumph have worked their magic on this motor and it now makes about 18 percent more peak torque – 80Nm which kicks in at a low 3,230rpm.

The Scrambler, on the other hand, looks like a bit of a mischief-maker. Its tank seems to be a size too small for the motorcycle, giving it a more muscular look with the wide tyres exaggerating its size. Ducati’s engineers have repurposed the 803cc air-cooled, four-valve, L-twin motor from the Monster 795/796 and fiddled around with camshafts, mapping them until it suited the Scrambler’s purpose. It makes 75hp of power and 68Nm of torque, both of which peak at much higher rpm as compared to the Triumph. Another rather crucial difference is the underpinnings of the Scrambler, which consist of a tubular steel trellis frame that uses the engine as a stressed member.

With quick power delivery, the Scrambler’s motor is ever ready to... scramble!

The Street Twin is designed to be a standard, road-going motorcycle and gets conventional 41mm telescopic forks up front and a pair of twin shocks at the back. The Scrambler, built for handling a multitude of surfaces, comes with upside-down forks while a monoshock handles suspension duties at the rear. And it’s the same story with the brakes as well. The Bonnie gets a single 310mm disc at the front and 255mm disc at the rear. Not only does the Scrambler rock a larger 330mm disc at the front (the rear is 245mm), it also gets a four-pot radially mounted Brembo monobloc caliper (the rear gets a one-piston floating caliper).

Both bikes run an 18/17-inch front/rear wheel combination, but when it comes to tyres, the Scrambler comes shod with chunky block pattern Pirelli MT60s which are designed for on/off-road use. The Street Twin, on the other hand, gets specially designed Pirelli Phantom Sportscomp rubber, which exudes a sense of an old-school tread pattern design, and comes in a radial only on the rear wheel.

When it comes to outright acceleration, the Scrambler has the Street Twin beat, making the dash from nought to 100kph in just 5.03 seconds as compared to 6.14 seconds for the Triumph. Most of this is down to the sheer difference in engine output and kerb weight (186kg for the Scrambler vs 217kg for the Street Twin). Even when it comes to in-gear acceleration, the Ducati’s power delivery is quite frantic and the bike is very eager to build revs, making it the quicker of the two. While both the bikes’ motors have strong mid-range performance, the Scrambler has far better pull through its rev range. But the trade-off is that the Scrambler’s L-twin is not the happiest at low revs, and shudders quite a bit below 2000-2500rpm. Riding the bike through slow-moving traffic requires a more measured approach because of the Scrambler’s snatchy on-off throttle transitions. And to top it off, you do get a fair amount of vibrations at high revs – really a pity considering just how much its motor loves to rev. The Street Twin feels a lot more tractable at slow speeds. The engine itself is extremely smooth and that extra dose of torque allows it to feel far less high-strung when you open the taps. The Triumph also gets a digital ride-by-wire throttle which makes for very smooth inputs. Along with these new throttle electronics, the bike comes with a rudimentary traction control system which, though intrusive, is a boon to have on loose surfaces.

When it comes to gearboxes, neither one is particularly slick, but it was the Scrambler’s six-speed unit that delivered a few false neutrals when trying to shift rapidly. The Street Twin’s five-speed gearbox, on the other hand, just feels vague when trying to downshift. The closely stacked gear ratios on the Scrambler don’t make for a very relaxed motor, with the 803cc L-twin just itching to rev harder and go faster. But get a bit aggressive with your riding, and this baby Ducati puts a huge smile on your face. On the other hand, the Street Twin is a polar opposite experience. Its well spaced-out gear ratios along with its easy-going motor makes it the perfect recipe for a soothing ride.

Now both of these are rather short motorcycles, but the Street Twin’s ultra-low seat height of a mere 750mm is welcoming to even the shortest of riders from the get-go. While the Scrambler’s seat is quite soft, its shape is rather odd and it can make even the shortest rides out of the city feel like you’re participating in a Bun Burner challenge. And as much leverage as those tall, wide handlebars offer, their high position can make your arms really tired after long durations in the saddle. On the other hand, the Bonnie does a wonderful job with its wide seat and lower set handlebars. While its pegs do tend to cramp your leg position a bit, the slight leaned over posture afforded by the bars makes the ergonomics a lot more comfortable. The only real issue is that most riders’ knees tend to sit below the tank, making it almost impossible to grip with one’s thighs.

When you show the Scrambler some corners, it really comes alive. Its more high-end suspension setup and cast alloy swingarm give it the rigidity to be flicked from corner to corner with utmost ease. And even with its quick flickability and nearly-knobby tyres, it delivers plenty of confidence in the turns. It’s just incredible how much fun the Scrambler is to ride when you decide to get aggressive with it in the twisties. But to achieve this sportiness, the suspension setup is a bit on the stiffer side, which makes the ride a bit bumpy at slower speeds. Build up some speed, however, and the Scrambler just flies over irregular roads. The longer travel suspension is also a boon when attempting some mild off-roading. It loves to slide about in the dirt and the wide handlebars and low seat give you a lot of control and confidence while doing so. Heck, with that riding position, standing on the pegs while traversing over rough terrain feels completely natural. The Street Twin is happiest when on smooth tarmac. As the speed builds up, it feels a bit heavy to steer and while the bike is fairly confident on most turns, it doesn’t really revel in any sort of corner carving. The Pirelli Phantom tyres have a good measure of grip in the dry, but when the surface gets loose, it’s best to just back off the pace significantly. Its suspension setup and the box section swingarm are all designed for plenty of pliancy and a comfortable ride quality is the Street Twin’s real pièce de résistance. Of course, the bike’s heavier weight and lower suspension travel means that it does feel jarring on large potholes, but it handles most bumps on the road far better than the Scrambler.

When you need to slow things down, again, it’s the Scrambler that has a distinct advantage. Drop the anchors at 80kph and this bright yellow machine came to a dead stop in just 29.3 metres. The same test saw the Brit coming to a halt in a much longer 35.4 metres. Both these bikes are equipped with ABS and while the Scrambler has brilliant brake feel, the Street Twin’s isn’t too shabby either. But at the end, the numbers do speak for themselves.

I’m not one to easily resort to clichés such as the apples and oranges debate, where both bikes are likeable for their own set of merits. But as much as I try, it’s almost impossible to pick a clear winner of the two. Both the bikes have distinct personalities that will appeal to different sets of people. Both of them have their own shortcomings as well; the Street Twin simply does not have the performance and go-anywhere ability of the Scrambler, while the Scrambler lacks the refinement and relaxed riding experience of the Street Twin. It’s nigh on impossible to say which is the ‘better’ machine amongst the two, seeing as how each bike offers the right set of abilities and characteristics for its respective audiences. However, on a personal note, and I’m sure a lot of younger riders would agree, that as enjoyable as the Street Twin is, it simply does not offer the same excitement levels as the Scrambler. And especially when moving up to our first big bike, we really can’t do without that excitement. So for now at least, our choice is going to have to be the Ducati Scrambler.