The new MV Agusta store sold eight bikes on the day of its opening; retails five of the bike maker's models. 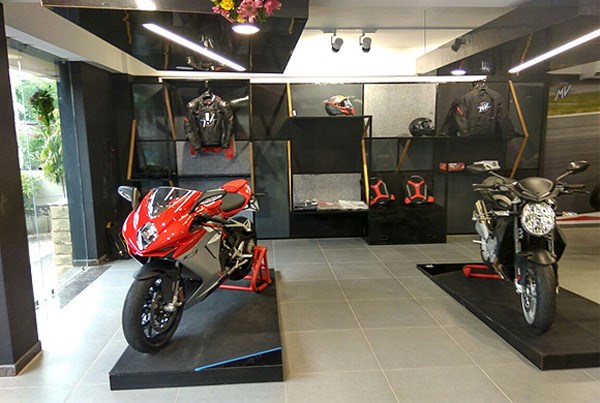 MV Agusta India, the local arm formed under the association of the ultra-premium motorcycle brand from Italy, MV Agusta and India’s Kinetic Group, has opened a retail store in Ahmedabad, its second in the western region. Named MotoRoyale, the service-backed dealership, which saw its first store opening in Pune in May 2016, delivered eight bikes on opening day in Ahmedabad.

It can be recalled that Ajinkya Firodia, managing director, MV Agusta India, had earlier told our sister publication Autocar Professional that his company had set a sales target of close to 300 units in its first year in India. The local unit also has exclusive distribution rights for selling MV Agusta bikes in Bangladesh and Sri Lanka, besides the domestic markets. According to Firodia, sales from the two retail stores together have crossed 15 units in last two months. MotoRoyale, which is mainly operated and controlled by the officials at the Kinetic Group, a veteran in the two-wheeler business since 1972, is an upcoming retail and service chain of super-premium bikes. The company plans to open these stores in Bengaluru, Chennai, Delhi and Mumbai.

MotoRoyale stores currently retail five MV Agusta models (four-cylinder, 998cc F4 RR and F4; three-cylinder, 800cc F3; four-cylinder, 1078cc Brutale 1090 RR and Brutale 1090) in the price range of Rs 16.78 lakh to Rs 40 lakh. Commenting on the inauguration of the new store, Firodia said, “I am delighted to inaugurate our second world-class showroom in India, in Ahmedabad. Gujarat has always supported all-new product innovation, and was a pioneering market for Kinetic Luna and Kinetic Honda many years ago. Now, it has become one of the most important markets for superbikes in India. MV Agusta is the most premium motorcycle brand in the country, and boasts of in-line four-cylinder and in-line three-cylinder engines delivering up to 203hp of power.”

Last month Autocar Professional broke news about MV Agusta planning to bring the all-new Brutale 800 (three-cylinder, 800cc) to its retail showrooms early next year. The model, which is scheduled to be imported via the semi-knocked-down (SKD) route, is expected to become the most affordable model for MV Agusta India once it reaches the local markets.