The two-wheeler manufacturer is looking to reduce backlog of the Honda Activa to 25,000 units per month, down from around 30,000 units. 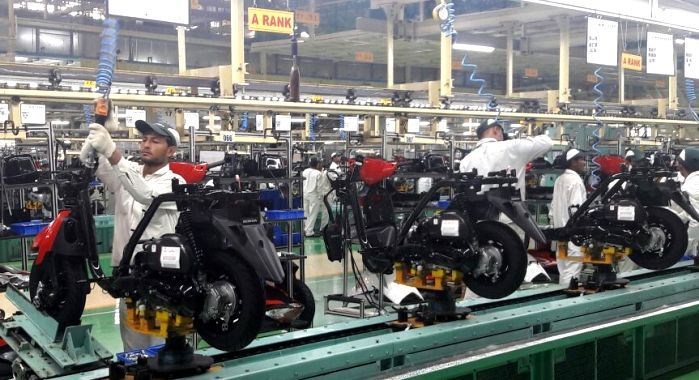 The new line will add 6,00,000 units, which takes the overall capacity of the plant to 1.2 million per annum and HMSI’s cumulative capacity to 5.8 million units per annum (see capacity chart below). With this production increase, the manufacturer is looking to reduce the existing backlog of its popular Activa scooter to 25,000 units per month from an estimated 28,000-30,000 units a month.

The first assembly line at this Gujarat plant commenced operations in February 2016 and within four months reached its peak capacity. Until now, the manufacturer has invested Rs 1,100 crore in setting up this plant and has employed an additional 1,500 workforce to operate the second assembly line.

This takes the total number of plant personnel to 4,000. HMSI and its 23 component vendors have together invested close to Rs 2,200 crore and generated nearly 9,000 employment opportunities in Gujarat.

Speaking at the second assembly line inauguration today, Keita Muratmasu, president and CEO, said: “Honda Two-Wheelers sold a total of 17 million units globally during 2015-16; 27 percent of that came from India which is now becoming the most important and the biggest market for Honda in the world. We expect that India will overtake Indonesia in FY2017.

Scooterisation, a trend seen earlier in developed markets of the world, is firmly driving the Indian two-wheeler momentum today. The scooter segment is growing at 30 percent compared to 15 percent growth of the two-wheeler industry.” According to company officials, Honda Two Wheelers has a market share of 70 percent in Indonesia. It has a market share of 27 percent in India which, of course, is a much larger market compared to Indonesia.

HMSI has a commanding 58 percent share in the Indian scooter market, most of it capitalised by the Activa family of scooters. From January to May 2016, the Activa has been the bestselling scooter in India. Meanwhile, the manufacturer is looking to cross the sales milestone of 50 lakh units for the first time in a single financial year in 2016-17.

According to YS Guleria, senior vice-president (sales and marketing), HMSI, the second assembly line is likely to reach peak production capacity by the festive season this year (September-October 2016).