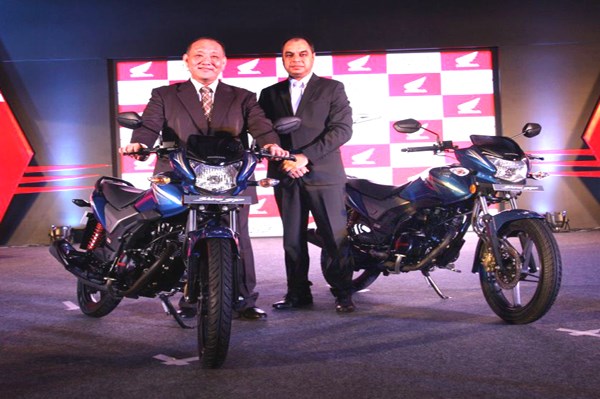 Honda has launched the new CB Shine SP in its 125cc motorcycle segment. The CB Shine SP is positioned above the CB Shine and is available in three variants – Self-Drum-Alloy, Self-Disc-Alloy and CBS, priced at Rs 59,990, Rs 62,400 and Rs 64,400 respectively (all prices ex-showroom, Delhi). This is the company’s 15th launch this year.

Powering the motorcycle is the tried and tested 124.7cc single-cylinder air-cooled engine from its sibling, the CB Shine. The motor develops 10.57bhp and 1.1kgm of torque and is mated to a five-speed gearbox; on the CB Shine it's paired to a four-speed unit.

The model also gets Honda’s Combi-Braking System (CBS), which the manufacturer claims makes the motorcycle safer for the rider.

Suspension duty is handled by a standard telescopic fork up front and twin spring-loaded hydraulic shock absorbers at the back. The bike comes equipped with a choice of drum brakes front and back or discs up front and drums at the back.

Speaking at the launch, Keita Muramatsu, president and CEO, Honda Motorcycle & Scooter India Pvt. Ltd said, “While India is the world’s fastest growing economy, it is also home to one of world’s youngest populations. These youngsters recognise their ‘special’ place in society. The new CB Shine SP helps them reflect the same ‘special status’ and puts them a gear ahead of their peers. CB Shine SP is an extension of the ‘new era of motorcycling’ we had ushered in at the Honda RevFest 2015. The model was showcased as a mystery model in August 2015.”