It's the sportier-looking twin of the Honda CB Unicorn 160; to be launched Diwali 2015. 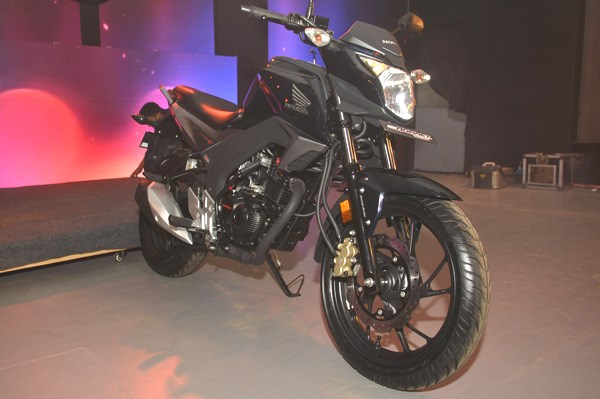 Honda has long positioned the Unicorn as a premium commuter, which was good on almost all fronts. Recently, the company gave the motorcycle a larger heart too, replacing the 150cc unit with a 160cc one. Although a great performer, the Unicorn missed out on an important factor — sportiness. Now Honda has taken the wraps off of the CB Hornet 160R - a sportier, more aggressively styled twin of the Unicorn.

The Hornet gets a shorter single-piece handlebar, a new headlight unit and plastic bits on the tank to add muscle to the overall appearance; the stubby silencer with an aluminum-finished shroud adds to the look. There's also the aluminum-finished grab rails for the pillion. Stopping the bike are petal discs on the front and the rear, which work together through Honda's combi-brake system.  Front suspension is taken care of by a telescopic pair of forks, while the rear suspension duties are performed by a mono-spring. The wheels on the CB Hornet 160R are 10 spoke alloys on the front and the rear.

The engine is the tried and tested Honda 160cc unit. We expect the performance to be the same as the CB Unicorn available in the market, however this can be confirmed only once we get to test the CB Hornet 160R for our extensive review.

Upon launch, the Hornet is expected to compete with other motorcycles such as the Yamaha FZ-S V2.0 and will try to dethrone the current class-leader – the Suzuki Gixxer, in the 150-160cc class, performance and naked motorcycle segment.