Hero to roll out made-in-India commuter bike at the culmination of the Dakar Rally in Argentina in 2017. 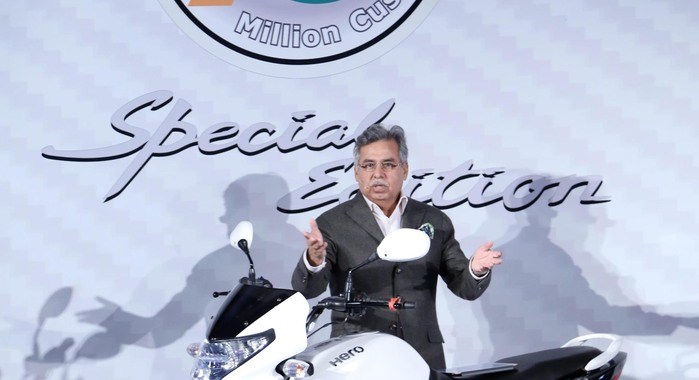 Hero MotoCorp's Pawan Munjal at the launch of the new Achiever 150.

Hero MotoCorp is likely to roll out a new commuter motorcycle in the 100-110cc or 125cc range as part of its first-ever global launch of an India-developed motorcycle in Argentina. The launch will happen at the culmination of the Dakar Rally in January 2017.

The all-new motorcycle is expected to sport a new engine, new chassis and a completely new body. Reliable sources informed sister publication Autocar Professional that at least four-five new models in the commuter segment are under development at the company’s new product factory – the Centre for Innovation and Technology in Jaipur. One of these could be the model for the global launch.

Unconfirmed reports have disclosed that Hero readying an adventure bike to coincide with the Dakar Rally but that does not seem to be in the company’s product pipeline at the moment. Currently, it is focusing on expanding its popular product portfolio in these markets to meet its long-term target of achieving 1.2 million sales by 2020 from its overseas business. Hence, Hero MotoCorp is currently expanding its manufacturing footprint and growing its penetration overseas, especially in Latin America and Africa.

Earlier this year Munjal, while outlining his vision for Hero MotoCorp, had spoken of setting up a manufacturing facility in Brazil in South America, coinciding with the Rio Olympics this year – thus, there is a likelihood that the Brazilian plant is set to be inaugurated at the end of the Dakar Rally and the new global motorcycle will be rolled out for those markets. Hero also has plans to set up another production unit in Argentina and could possibly flag off the construction activities there as well.

At the recent launch of the Achiever 150 motorcycle, Pawan Munjal, CMD and CEO of Hero MotoCorp, spoke about the first-ever global launch in Argentina being a major event for a new product that would target global distributors and some domestic retailers as well.

The company has already announced its plan to develop a flexi-fuel engine that runs on ethanol biofuel for markets like Brazil, and the new bike could be powered by such an engine. In fact, Hero has been pushing sales of its 100-110cc two-wheelers in Central and South America, while its 125cc motorcycles are very popular in Africa. The new Achiever 150 too will be exported to Latin America and Africa from India. The company plans to further expand its distribution network in LATAM and the first global motorcycle launch early next year will be a springboard to help expand its global distributorship base.