Launches new range of tyres called 'Apollo Acti' for both motorcycles and scooters. 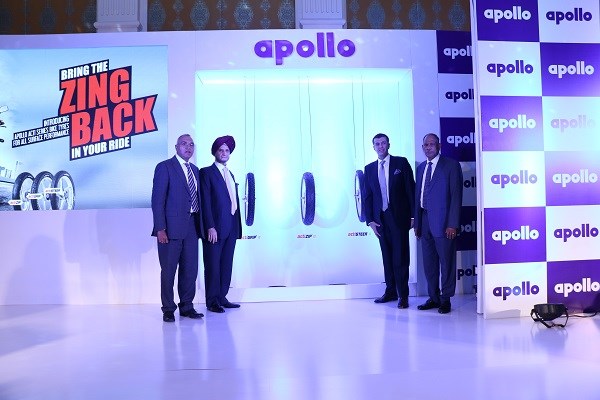 Apollo Tyres today announced its entry into the two-wheeler tyre segment and unveiled a range of tyres for motorcycles and scooters.

Called Apollo Acti, the range of tyres are designed and developed at the company’s R&D centre in Chennai. The company, which has been manufacturing tyres for passenger vehicles and commercial vehicles, aims to cover nearly 85 percent of the replacement market for two-wheelers in India.

The company claims that the range of tyres have a high level of cornering stability and are capable to handle braking in dry and wet conditions. The tyres, available in both tubeless as well as tube type, are designed with a primary focus on grip safety and comfort and optimised to offer a better grip, according to the company.

The Apollo Acti range of tyres will be available for sale from today at Apollo-authorised business centres in major cities across the country.

The company decided to venture into this segment mainly due to an upbeat growth outlook for the two-wheeler market in India, which is currently around 120 million units, along with demand from business partners.

Apollo is currently only focussing on the mass market two-wheelers with its new range of tyres with the focus on higher capacity motorcycles requiring radial tyres to come as part of a second phase.

Initially, the company will cater to the replacement market in the country, which accounts for more than 45 percent of the total tyre market and at a later stage will progress to the automotive sector.

“Our intention is to foray into the aftermarket segment and eventually foray into the OEM sector. The OEM sector accounts for 53 percent of the total tyre market in the country. We understand that to become a serious player in the tyre market, one will have to cater to both after market as well as OEMs,” Satish Sharma. President (Asia Pacific, Middle East and North Africa) said.

According to reports, the two-wheeler tyre market in the country at present consists of MRF, Ceat, TVS Srichakra, Birla Tyres, Metro Continental and Ralco with MRF being the largest player in the segment.