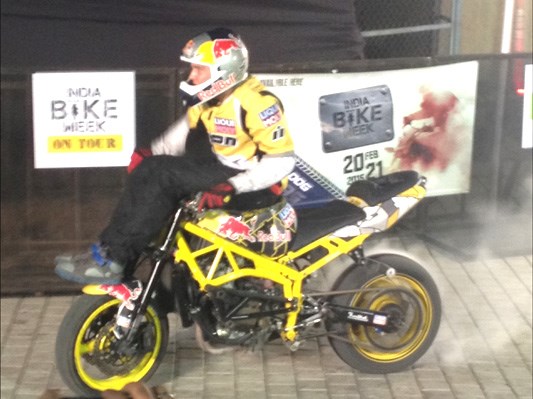 Arunas, or popularly known as Aras Gibieza, a European stunt bike rider, performed at Pune's leg of the run up to the India Bike Week 2015. He also judged the stunt riding competition held on the same day, where three teams battled it out. The winning team, Rishi, will participate in the final event in Goa that will be held on February 21 and 22nd.

Prior to this, he has performed in Jaipur, Ahmedabad and Surat since January 17, 2015. He will now perform in Bangalore on January 29, Coimbatore on February 1 and Kochi on February 4.

Two of Aras’ favorite stunts include the switchback wheelie and the watchtower. He rides a heavily modified 2003 Kawasaki Ninja ZX6R B1H, and uses the same motorcycle to perform at his competitions and shows.

"Performing for a crowd that sparks freshness and voice is always an energizing experience, Aras Gibieza said. "I got to see a celebration of biking brotherhood that brought people together with a special glue that is hard to understand, but wonderful to witness. I am surely coming back here once more," he added.

Watch out for Aras in Bangalore, Coimbatore and Kochi!