The updated motocrosser in India gets a bump in power/torque and uprated suspension settings. 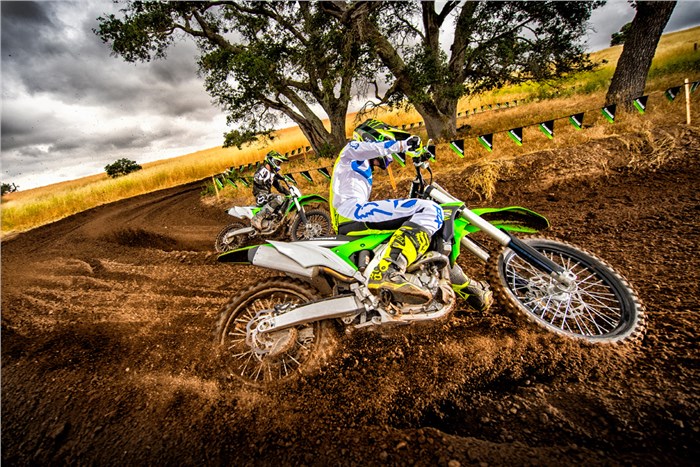 Kawasaki has thus far launched four non-road-legal, dirt-biased motorcycles. First came the small KLX 110 in late 2015, followed by the motocross-style KX100 and KX250F in December 2016. In January 2017, Kawasaki introduced the off-road, trail-style KLX 140G. At the moment, the Kawasaki India website only lists the KLX 110 and KLX 140, suggesting that the more focussed KX series of motorcycles is due for a model change. Now, just a month after the international unveil, Kawasaki has brought the new 2018 KX250F to India.

Launched at the Anzen Kawasaki showroom in Mumbai on July 16, the new KX250F is priced at Rs 7.55 lakh. Since it cannot be registered for road use, this is the final price. The KX250F is a serious competition motorcycle for pro or aspiring pro-level motocross racers who should appreciate the changes made for the 2018 model. The 249cc, liquid-cooled, four-stroke single-cylinder engine sees multiple changes with a new throttle body and fuel injector angle that promises increased torque through the rev range. A more powerful fuel pump, new intake camshaft, new cylinder head and new exhaust header all work towards a claimed bump in power across the rev range. Launch control continues to be offered, allowing riders to exploit a clean, hard start with the manic power in the first two gears kept under control by retarding the ignition timing. Stock ignition timing reverts once the rider shifts into third gear.

The slim but strong aluminium chassis continues unchanged from last year’s bike. However, the Showa Separate Function forks and Uni-Trak rear suspension feature revised settings that promise better precision and control through the corners and over bumps. Braking duty for the feather-light 104kg KX is handled by petal discs, a single, large 270mm unit up front and a smaller 240mm disc at the back.

The KX250F is the most powerful motorcross bike Kawasaki offers in India and is best suited for experienced riders. For less experienced riders, there’s the more affordable KLX 140 while younger riders will find the smaller and friendlier KLX 110 a good start. As of now, Kawasaki is the only company officially retailing motorcross and dirt bikes in India.