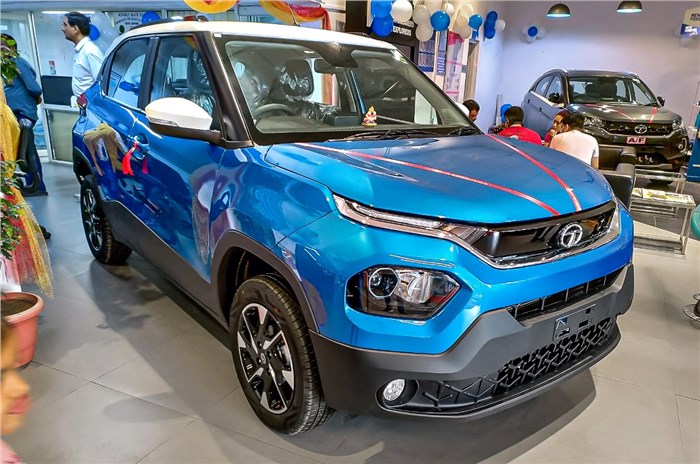 New car sales in October have turned out to be quite underwhelming. Just when things were improving for passenger vehicle (PV) manufacturers in India, the ongoing shortage of semiconductors has proven to be a major spoilsport, with some leading carmakers being impacted. And all this is happening just when the festive season has opened and consumers are willing to spend once again.

According to the numbers released by 12 companies, October's wholesales (sales from carmakers to dealers) stood at 2,58,774 units, down a substantial 21 percent year-on-year (YoY) (October 2020: 3,25,965 units). While the country’s largest carmaker – Maruti Suzuki – registered a 33 percent decline in dispatches to its dealers, Tata Motors, on the other hand, made the best of the situation by stepping up its supply chain coordination and registering as much as 44 percent YoY sales growth. Here’s taking a closer look at the company-wise sales last month.

The bellwether of India’s PV industry recorded a sharp 33.4 percent YoY decline in sales which were pegged at 1,08,991 units (October 2020: 1,63,556). The company says it took all possible measures to minimise the impact of the chip shortage and was able to perform better than expected at the start of the month.

Maruti Suzuki’s utility vehicle (UV) models were the only saving grace at 27,081 units (25,396/+7 percent). These models include the Vitara Brezza, Ertiga, Gypsy, S-Cross and XL6.

The carmaker has already cautioned that November would see opportunities getting lost too, as production this month is projected at 85 percent of normal output.

The Korean company and the second largest PV maker by sales volumes was also severely impacted by the chip shortage last month. It sold 37,021 units (October 2020: 56,605/-34.6 percent). With its high-on-demand models such as the Creta, Venue, i20 and Aura being electronic-intensive products, the company is staring at high waiting periods for its best-selling models.

If any carmaker has shown resilience and absolute stepping up of coordination during the entire global chip upheaval, it is homegrown major Tata Motors. The company registered a significant 43.6 percent YoY sales uptick to sell 33,925 units (October 2020: 23,617).

Despite the semiconductor shortage, Tata Motors went ahead and launched its latest mass-market sub-compact SUV – the Tata Punch – on October 18, eyeing more volumes on a monthly basis and cementing its position in the Top 3 tier in the PV segment in India.

Toyota saw a flat sales performance with dispatches standing at 12,440 units last month (October 2020: 12,373). The company is witnessing an uptick in consumer demand with increasing normalcy in the COVID-19 situation across the country. The Toyota Fortuner and Innova Crysta have been the drivers of demand for the company, with an added push from the Glanza and Urban Cruiser at the entry-level space.

Renault clocked total dealer dispatches of 8,910 units (October 2020: 11,005), registering a 19 percent YoY sales drop owing to the semiconductor shortage. The company is witnessing strong demand for the Renualt Triber MPV and Kiger sub-4 metre SUV, both of which are pitched as value-for-money offerings in their respective segments.

Despite an improvement in consumer demand, the chip shortage led to Honda being considerably impacted, as it registered a 25.2 percent YoY sales decline to 8,108 units (October 2020: 10,836).

“The situation remains dynamic due to the ongoing supply-side challenges. We were able to wholesale the entire factory stock in October. We continue to make all possible efforts to maintain a steady delivery pace and cater to the market demand effectively,” said Rajesh Goel, senior VP and director, Marketing and Sales, Honda Cars India.

Nissan clocked wholesales of 3,913 units (October 2020: 1,105) on the back of the Magnite compact SUV, registering an almost four-fold jump in sales over last year, when it didn’t have its make-or-break model in the country.

The India 2.0 strategy has worked in favour of Volkswagen which reported wholesales of 3,077 units last month (October 2020: 2,054), registering a significant 49.8 percent YoY sales uptick. The launch of the Taigun compact SUV, which is garnering strong bookings for the company, is a good sign of its revival in the market.

Volkswagen’s cousin – Skoda – too is the beneficiary of the Group’s India 2.0 strategy, with the Skoda Kushaq reviving the brand to clock 3,065 units, 1,421 last month, and multiply sales by almost two times. The Kushaq has received 15,000 bookings so far.

MG sold 2,863 cars to customers in October, registering a YoY sales decline of 23.7 percent (October 2020: 3,750), owing to the semiconductor shortage. The company is seeing consumer demand rise, and received over 4,000 bookings for the Hector, 600 for the ZS EV and 5,000 bookings for the Astor which was launched on October 11.