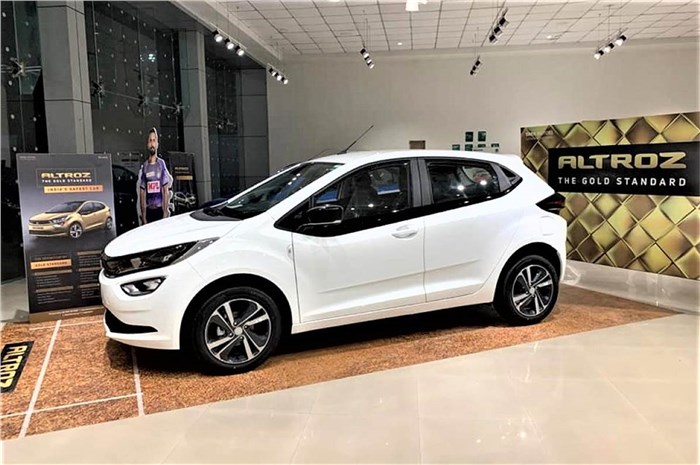 Automakers in the passenger vehicle (PV) segment have reported good sales volumes for the month of February – the penultimate month of FY2021. Cumulative sales numbers of 14 PV makers for February 2021 add up to 3,08,611 units, which is crisp 23 percent year-on-year growth. However, compared to January 2021’s 3,03,534 units, the month-on-month growth is just 2 percent. Clearly, the industry is not out the woods yet and it will be a while before double-digit month-on-month growth becomes consistent.

Maruti Suzuki’s six-car pack of Wagon R, Swift, Celerio, Ignis, Baleno and Dzire clocked 80,517 units in the month, registering a year-on-year (YoY) uptick of 15.3 percent (69,828). While the entry-level duo of the Alto and S-Presso were down 13 percent YoY with sales of 23,959 units (27,499), what continues to bring joy to Maruti Suzuki would be its performance in the UV segment.

The arch-rival running up Maruti’s heels, Hyundai Motor India, clocked sales of 51,600 units last month, registering a robust YoY uptick of 29 percent (40,010). In Hyundai’s case too, the demand is led by the highly profitable Creta and Venue SUVs, followed by the new i20 premium hatchback, which is drawing buyers to its unique design, appealing features and plush cabin. As per the company, the bulk of the demand is coming for top variants that come loaded to the gills with latest digital technology and gizmos on board.

Tarun Garg, director, sales, marketing and service, HMIL said, “Hyundai Motor India has been consistently striving to drive a resurgence in sales, thereby contributing towards economic recovery and bringing the industry closer to pre-COVID-19 level sales. We have recorded growth across segments that reflects an all-around improvement in buyer sentiment.”

Homegrown Tata Motors, which has seen a scintillating fiscal year, owing to new model launches and demand for its 5-star safety-rated products like the Nexon and Altroz, also reported robust performance in February. The carmaker sold 27,225 units, registering a staggering 119 percent YoY growth (12,430). The numbers were also the company’s highest monthly figures in 107 months.

The company is bullish on growth from the UV segment, where its Nexon compact SUV is giving a tough fight to competitors such as the Maruti Vitara Brezza, Hyundai’s Venue and Kia’s Sonet. In the midsized segment, the Harrier and newly-launched Safari too aim at disrupting the category with their price-to-value equation on offer to customers.

Korean carmaker from the Hyundai Group family, Kia Motors too has seen a remarkable stint in the Indian market so far. The company clocked sales of 16,702 units last month, registering an uptick of 7 percent (15,644). The performance is being driven by demand for its newest product – the Sonet compact crossover – as well as the Seltos SUV, which remains the mainstay.

Introduced in September last year, the Sonet, by October 2020, had already garnered over 50,000 bookings, with waiting times soaring as high as nine months in some cities. In the next fiscal, Kia Motors India will be gearing up to introduce an MPV, with an aim to rival the Maruti Suzuki Ertiga in terms of pricing, but the Toyota Innova Crysta, in terms of the product attributes.

SUV maker Mahindra & Mahindra (M&M) recorded sales of 15,391 units, thereby registering a YoY uptick of 43 percent (10,756). The company is currently overwhelmed with the demand for its second-generation Thar SUV, launched in October last year. On February 1, the new Thar’s cumulative booking number crossed 38,500 units, with up to 45 percent demand coming for automatic variants, and as much as 25 percent of all customers opting for the petrol powertrain.

M&M is also witnessing strong demand for its XUV300 compact SUV, which also saw inclusion of an AMT option in its 1.2-litre turbocharged petrol variant on February 2. As per the company, the XUV300 too has received over 6,000 bookings in the last six months with M&M prioritising its production along with the Thar’s to minimise delivery wait times.

The Japanese carmaker recorded its best-ever sales in FY2021 last month, with a total of 14,075 units sold as against 10,352 units in February 2020, and registering a considerable 36 percent YoY sales growth. Toyota Kirloskar Motor’s previous best in the ongoing fiscal was in October last year when it sold 12,373 units in the month.

The demand for the refreshed 2021 model year versions of the Innova Crysta, as well as the Fortuner and its sporty iteration – the Legender – are helping the numbers tick for the company. At the lower end too, the Glanza hatchback and Urban Cruiser compact crossover are playing their part in the volume growth.

Speaking on the brand’s performance, Naveen Soni, senior vice-president, Toyota Kirloskar Motor, said, “We started the year on a positive note and the trend continues as we close the second month of 2021, clocking a growth of 36 percent. Wholesales have been very encouraging and we are witnessing a high influx of customer orders month on month, thereby both significantly contributing to the growth story. In fact, sales in February have been better than sales in January, thus helping us register a 27 percent growth in wholesales.”

Renault India has reported a 26 percent uptick in sales numbers, with total volumes in February being pegged at 11,043 units (8,784). The company is gaining from its value-for-money products, which while appealing to the urban customer, are particularly alluring the rural buyer for their extremely cost-effective propositions. The Renault Kwid, Triber and the recently-introduced Renault Kiger are examples of the same trend where Renault India has innovated diligently to offer maximum value to customers.

Japanese carmaker Honda Cars India went on to sell 9,324 units in February 2021, registering 28 percent sales uptick (7,269). Its mainstay Honda City sedan, alongside offerings like the Amaze and WR-V, are doing reasonable numbers in the market, and catering to customers at both ends of the spectrum. While the City is competing with more attractive UV propositions like the Kia Seltos and Hyundai Creta, the Amaze is seeing first-time and value-conscious buyers gravitate towards Honda showrooms.

According to Rajesh Goel, senior vice-president and director, marketing and sales, Honda Cars India, “The market demand continues to be good which is reflected in our positive growth in February sales. However, the shortage of semiconductor-related parts impacted us on supply front last month, which limited our production volume and dispatches for certain models. In the coming months, we will continue to make production adjustments in order to reduce its impact on our waiting customers.”

“As for the industry, we are optimistic about the future as the demand for automobiles remain on the rise and has brought in the much-needed stability and positivity,” added Goel added.

The company attributes this achievement to the pronounced response it is receiving for its MY2021 line-up which includes the refreshed Hector SUV family, updated MG ZS EV and the Gloster flagship SUV.

According to Rakesh Sidana, director – sales, MG Motor India, “The higher sales of 2021 product lines are very encouraging. We also expect the EV trend to accelerate with our charging infrastructure now available across more cities. The growth momentum is expected to continue in March, and we are working at the back-end to try and reduce the waiting period for our customers.”

Another Japanese player, Nissan Motor India is currently witnessing a complete transformation of its India innings, with the introduction of the Nissan Magnite compact crossover in December 2020. The company clocked 4,244 units last month, registering a substantial 313 percent growth over 1,028 units sold in February 2020.

The major reason behind this business revival is the attractively-priced Magnite with which Nissan has been able to draw in close to 40,000 bookings in three months.

“Nissan Magnite, on the strength of revolutionary value proposition, has had an overwhelming customer response with 6,582 deliveries to the customers in its first two full months of launch, the in-flow of bookings is continuous of the discerning customers seeking a game-changer product in the highly competitive SUV segment.”

“The plant is operating at full capacity with three shifts with the support of supply chain partners to shorten the waiting period of the all-new Nissan Magnite,” said Rakesh Srivastava, managing director, Nissan Motor India.

The two German brands under the Volkswagen Group umbrella performed quite differently in the month of February. On one hand, Volkswagen India recorded cumulative sales of 2,186 units, registering a remarkable YoY growth of 525 percent (35), on account of new models such as the Polo and Vento TSI, as well as premium products including the Tiguan AllSpace. Whereas, on the other, Skoda Auto slipped 32 percent YoY to only 853 units (1,259) in the month. However, the carmaker is gearing up to the launch of its India-specific, Hyundai Creta-rivalling midsized SUV – Skoda Kushaq – which is the first model in the VW Group’s India 2.0 revival strategy and will be unveiled on March 18. 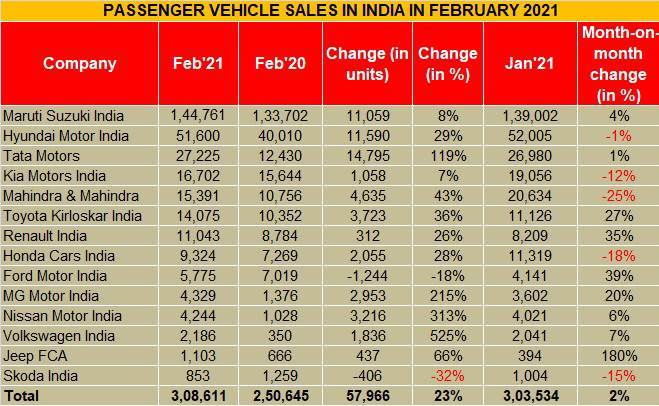 The performance of carmakers in February is a clear indication that the economy is gradually springing back into action, what with people having high hopes of India’s mass vaccination drive against COVID-19. On the other hand, constraints of ongoing raw material shortage impacting supplies looms large, but industry experts are also hopeful that the situation would normalise around July.

From the looks of it, March 2021 sales should be good too, notwithstanding the fact that there is a global shortage of semiconductor supply in the automotive industry, and rising raw material prices are pushing new-car prices northwards. A number of PV makers companies, particularly those with popular SUVs, are witnessing unprecedented demand, especially for new models.