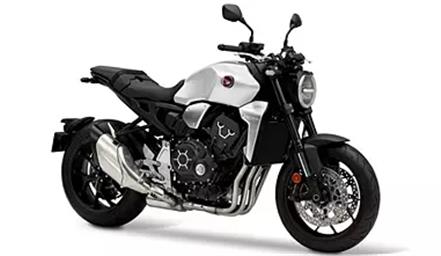 The Honda CB1000R is a naked street bike in the litre-class that replaces the CB1000R Hornet that was previously offered in the country. It features H...

The Honda CB1000R is a naked street bike in the litre-class that replaces the CB1000R Hornet that was previously offered in the country. It features Honda's new 'Neo Sports Café' design language, which was first shown as a concept at the 2017 Tokyo Motor Show. The motorcycle's look is its most notable feature. With a sculpted fuel tank, brushed aluminium radiator covers, and a front fender with a circular LED headlamp, it offers a minimalistic aesthetic. It also comes with a single-sided swingarm, which adds to its cool factor. The motorcycle's previous BS4 model has plenty of modern innovations, including a unique full-colour TFT display for the instrument console. Ride-by-wire, traction control, ABS, and four riding modes were also included. Notably, all of these gadgets are likely to remain in the next iteration, with the possibility of additional functionality. Showa's fully adjustable inverted forks for the front and a mono-shock unit for the rear are likely to be the same. There are 310mm twin discs up front and a single 256mm disc in the back for braking.