Maruti Suzuki, the bellwether of the passenger vehicle industry, reported as much as a 57 percent year-on-year (YoY) sales decline this September.

The ongoing global semiconductor crisis has once again led to the sales of passenger vehicles in the country taking a hit in September. As demand for personal computers and smartphones rose at the height of the pandemic, semiconductor companies diverted supplies away from the auto sector to the higher-margin electronics industry and now the production has fallen behind demand.

A car with connected tech and other electronics typically uses around 150 semiconductor chips which go into the infotainment system, digital instrument cluster, central locking system and tyre pressure monitoring system. And these vital chips, which provide bits and bytes of memory, are in short supply. It is a situation Indian automakers are now familiar with – production lines halted, lead times extended, and what’s more, some carmakers are even removing options from cars. All this just ahead of India’s festive season.

With Maruti Suzuki, the bellwether of the passenger vehicle industry, reporting as much as a 57 percent year-on-year (YoY) sales decline, it clearly indicates how dire the situation is. Let’s take a look at the September sales numbers of key carmakers in India:

The passenger vehicle market leader registered sales of just 63,111 units last month, down 57 percent on year-ago sales of 1,47,912 units. Even in August 2021, Maruti sold as many as 1,03,187 units. The company had already warned shareholders about executing a 60 percent production reduction in September due to shortage in chip supply.

As far as upcoming launches go, Maruti Suzuki is lining up a slew of model updates, apart from the all-new Celerio’s market launch slated for November 10.

India’s second most popular player too was not spared from the chip shortage with September sales declining to 33,087 units – a 34.2 percent decline year-on-year – over 50,313 units sold in September 2020. Sales were also down on a month-on-month basis, where Hyundai sold 46,866 units in August 2021.

The company had earlier acknowledged that it is part of the global supply chain and is getting impacted by the prevalent scenario. The impact only means that Hyundai’s much-in-demand models like the Creta and i20 are going to see an uptick in waiting periods.

The homegrown carmaker has been the one to have bucked the trend and registered a 21 percent year-on-year uptick in sales to 25,730 units (September 2020: 21,199). Out of the total sales, 1,078 units have come from sales of EVs, which registered a marked jump of 250 percent over 308 units sold in September last year. However, on a month-on-month basis, sales were still lower than the 28,018 units sold in August 2021.

“EV sales recorded nearly a three-fold growth with the rising acceptance and popularity of the Nexon EV and Tigor EV. Looking ahead, the demand for cars and SUVs is expected to remain strong in the forthcoming festive season; however, the supply situation for electronic components may continue to witness challenging times,” said Shailesh Chandra, president, PVBU, Tata Motors.

In other news, Tata Motors unveiled the Punch micro-SUV today, bookings of which are currently open with the launch slated for October 20.

“The disruption in the supply chain has put a brake on the improving industry sentiment last month. As the festive period approaches, we are hopeful to see some improvement in semiconductor procurement. For the time being, we are taking all measures to optimise production and keep the waiting period of our vehicles in check,” said Hardeep Singh Brar, VP and Head of Sales & Marketing, Kia India.

Kia is gearing up to introduce an all-new MPV for India. This new model (Codename: KY) will see a market launch sometime in early 2022.

Mahindra’s September sales dropped 12 percent year-on-year to 13,134 units (September 2020: 14,857). While the company is already circumventing semiconductor crisis to minimise wait times on the Thar and XUV300, it could get challenging for the carmaker as it opens up bookings for the brand-new XUV700 on October 7. With prices starting at just Rs 11.99 lakh and spreading all the way to Rs 21.59 lakh, ex-showroom, the XUV700 is anticipated to bring a tough fight to the mid-size SUV segment.

According to Veejay Nakra, CEO, Automotive Division, M&M, “The challenges around the supply of semiconductors continues to pose difficulties for the auto industry globally. We have taken several steps to mitigate the effect and are working towards managing the situation as best as possible.”

Like Tata Motors, Toyota has also been able to record an uptick of 14 percent to 9,284 units (September 2020: 8,116). While Toyota announced that it was discontinuing its Yaris midsize sedan in the domestic market recently, the company continues to witness strong growth in demand for the Innova Crysta MPV and Fortuner. However, compared to August 2021, sales saw a sizeable decline from 12,772 units.

According to V Wiseline Sigamani, associate general manager, Sales and Strategic Marketing, TKM, “Demand in the personal mobility segment continues as we step into the festive months. Customer orders have been on a constant rise and we are witnessing a steady growth since the second wave. The Crysta and Fortuner continue to dominate their respective segments, with both garnering huge customer interests and orders. All other segments have also attracted good traction from customers and we are very excited to cater to the personal mobility needs of our customer, this festive season.”

The French carmaker clocked sales of 7,326 units, registering a year-on-year dip of 17 percent (September 2020: 8,805). The company’s sales are led by demand for the Kiger compact SUV, Triber MPV as well as the Kwid, which all offer a high-value proposition to the customer in their respective price segments.

Honda’s sales in September stood at 6,765 units, a year-on-year decline of 34 percent over last September’s 10,199 units. The City and refreshed Amaze are the models that are in high demand, but Honda's facing hurdles in streamlining production. Even on a month-on-month basis, sales are significantly down from 11,177 units sold in August 2021.

According to Rajesh Goel, SVP and Director, Marketing & Sales, HCIL, said, “On demand side, there is good momentum in the market with improved buying sentiment. However, supply chain hurdles – including the widespread chip shortage – has been a big challenge right now for the industry. This has impacted our production volume and dispatches during the last month. We will continue to align our production through our best efforts to tide over the shortage in the coming months.”

In other news, Honda is gearing up for the launch of the City hybrid in India that’s slated to come sometime in 2022.

MG Motor registered retail sales of 3,241 units last month, recording a 28 percent year-on-year uptick over 2,537 units sold in September 2020. MG continues to see the Hector and Hector Plus to be the key drivers of demand, with the ZS EV too aiding volumes with 600 fresh orders being claimed last month.

While it is targeting another 3,000 units every month from the new Astor mid-size SUV, that is slated to be introduced this month, the semiconductor shortage is a worrying concern.

“Our production has reduced by almost one-third due to the chip shortage. We expect this challenge to continue for the next few months. However, given the high number of bookings, we are trying our best to address the challenge and bring down the waiting period down to three months,” updated Rakesh Sidana, director, Sales, MG Motor India.

The Czech carmaker’s Indian arm sold 3,027 units in September, a 131 percent year-on-year uptick (September 2020: 1,312). The charge is led by the all-new Skoda Kushaq midsize SUV, which is aiming to get Skoda a bigger chunk of the SUV pie by trying to compete against the Kia Seltos and Hyundai Creta. The company currently holds a 0.85 percent share of the Indian PV market. On a month-on-month basis, sales saw a marginal drop from 3,829 units sold in August 2021.

According to Zac Hollis, Brand Director, Skoda Auto India said, “Skoda Auto India has managed to consolidate and move forward in September, despite the headwinds that the industry is facing in terms of some key components. We are confident of building our momentum, as we approach the festive season.”

In other news, Skoda also launched the Rapid Matte Edition in India, which will be limited to just 400 units and has been priced from Rs 11.99 lakh.

The Japanese carmaker is sort of relishing a comeback with the success of its Magnite compact SUV that has enabled sales of 2,816 units last month, registering a substantial 261 percent growth over September 2020’s 780 units, when this new model was not introduced in the market yet.

Nissan Motor India claims surpassing over 65,000 cumulative bookings for the Magnite with the challenge now shifting towards meeting this demand.

“The challenge has been on the supply side with shortages of semiconductors on which we continue to work with supply chain partners, to deliver more of the game-changing SUV – Nissan Magnite – to the delight of customers,” said Rakesh Srivastava, Managing Director, Nissan Motor India.

The German carmaker’s Indian arm registered sales of 2,563 units last month, and growth of 25 percent compared to sales of 2,050 units in September 2020.

On September 23, the company launched its all-new Taigun midsize SUV for an introductory price of Rs 10.49 lakh, ex-showroom. However, the company has serious competition from the likes of the Mahindra XUV700, Hyundai Creta and Kia Seltos.

Going ahead, Volkswagen will be launching a second model based on the MQB-A0-In platform sometime next year, replacing the ageing Vento.

With the festive season beginning this October, the demand for new cars could be at a high as the COVID-19 situation in the country is reasonably under control, as of now. However, with Maruti Suzuki India announcing a prolonged production constraint at its factory, expect carmakers to grapple to keep pace with the new bookings. The industry believes the chip shortage is not likely to get sorted any time soon and could extend well into 2022. 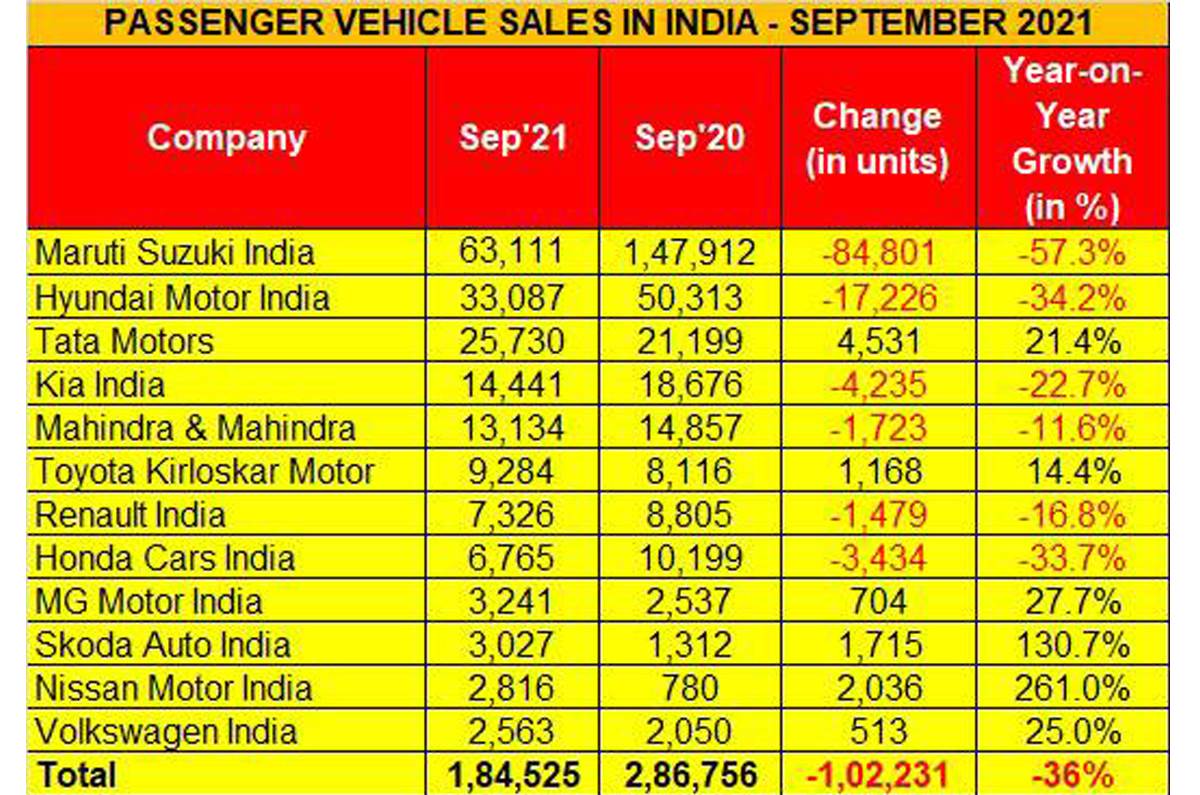 India’s Zojila tunnel to be the longest in Asia